I'll drink any Gin but that!

Or, Gordon’s Gin, An Apology

One of the best drinks in the world is the Gin & Tonic and in the last 75 years it has gained many fans. Back in 1930s America if you had asked for a Gin mixed with tonic you would have probably been asked to leave (the establishment’s Squire presuming that to order such a hideous mixture you must have had too much already).

Well gone are those days and today many bars and homes are full of discerning Gin & Tonic drinkers, each with their own pet recipe.

Two things I often hear when being told the perfect method for preparing this libation are:

#2 the Gin should NOT be Gordon’s. (Bombay Sapphire or some such luxury brand seems to be preferred). Indeed Gordon's Gin is often looked upon with disdain, but what many folks don't realise is that there is more to this Gin than that familiar resident of a public house’s optics.

Gone are the days of Gordon’s making Lemon, Orange, Grapefruit or even Mint flavoured Gin or using Jamaican Cane Sugar as the alcohol base but there are still some alternatives to the contents of that famous Green bottle. 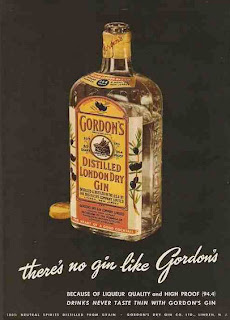 Having compared the export to the domestic Gin I was convinced that the recipe was different as they certainly don't taste the same. However I have been reliably informed that they are in fact made from the same recipe but as they are not all made in the same place, differences in the water used and the people making it may result in some flavour fluctuations.

From a blind taste test the Export Gin (37.5%) certainly goes better with tonic than it's domestic counterpart. The 40% version provides a little extra kick and makes for a more citrusy and refreshing drink. The 47.3% (a personal favourite) makes a good example of a Gin & Tonic although it is a bit on the strong side. This version of the Gin is also perfect for recreating a Classic Vesper.

Which leads us to the Distiller's Cut, the premium version of Gordon’s which comes in a clear, silver labelled bottle but is a little tricky to come by. The suggested garnish for a Gin & Tonic made with Distiller’s Cut was strawberry but I ignored that and garnished it only with ice. It makes a lovely Gin & Tonic; it's soft and smooth and has a delicious flavour of stem ginger. This is not a typical London Dry gin but it does make some ruddy good drinks!

Posted by David Bridgman-Smith at 12:51