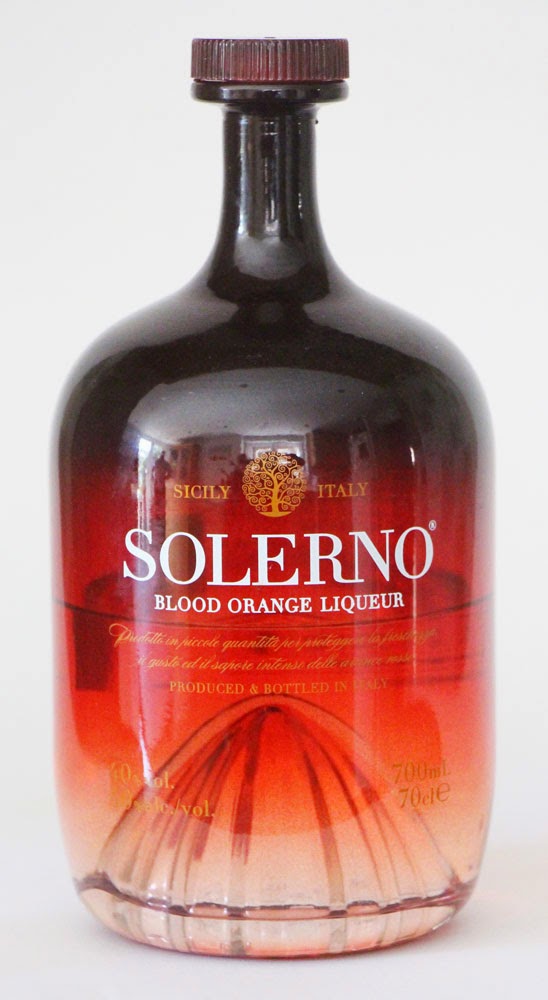 Once again I have Candlelight Club mixologist David Hamilton-Boyd to thank for bringing a new product to my attention, in this case Solerno Blood Orange Liqueur. Brought to us by master distiller Lesley Gracie, also responsible for Hendrick’s Gin, it is made in Sicily using blood oranges grown locally on the slopes of Mt Etna. These are processed by a local family who somehow extract essential oils from the oranges, which are blended with neutral spirit, Italian lemon and natural sugar.

OK, the first thing you notice about Solerno is the striking bottle, in blood-red glass (inspired by the Venetian island of Murano where they make a lot of glass) with the shape of an orange juicer built into the base. This is quite a clever ploy because every time you look at the bottle you are made to think of the process of squeezing the fresh juice from an orange—and this whole-orange emphasis is very much part of what makes this liqueur different.

I line Solerno up against the obvious default orange liqueur, Cointreau, and also a sample of Original Combier, apparently “the world’s first triple sec”, dating back to 1834, which Ted Breaux gave me on one of his recent visits to the UK. (Ted makes his Jade absinthe range at the Combier distillery in Saumur.) Original Combier is made from sun-dried Haitian bitter oranges and Valencian sweet oranges, which are rehydrated before the bitter pith is carefully removed and discarded. The orange rinds are macerated in neutral spirit, along with local spices and “secret ingredients from the Loire Valley”, before the infused spirit is redistilled twice. Cointreau don’t give much away about how their product, first released in 1875, is made, but it likewise involves both bitter and sweet orange peels.

On the nose Cointreau gives you a clear hit of bitter orange peel. It’s pretty vivid, but it is definitely the peel/pith that you can smell. Combier has a softer nose, offering what seems, by comparison, a combination of peel and fresh orange juice. Solerno’s aroma similarly seems softer and juicer than Cointreau’s.

Cointreau’s taste pretty much carries on from the nose. It is quite sweet but with some steeliness in the mouthfeel, perhaps from the bitter oranges or perhaps from the spirit used (which I gather is made from sugar beet). Combier’s orange flavour is softer and less pronounced, though likewise there is an edge to the mouthfeel. In fact if anything I would say it is a shade fiercer on the tongue.

When I come to taste Solerno it really is quite different. It has a high note, very aromatic, like a piece of fresh orange peel squeezed over a cocktail, but there are spices in there too, plus a darker, tongue-tingling mid-note; perhaps it is the sourness of fresh citrus compared to the bitterness of the rind. It is very lively, with a peppery finish. Which brings us back to the whole-fruit concept. The basic difference between Solerno and Cointreau is that the former does taste much more of both orange peel and juice, while Cointreau is just about the peel.

This character persists in cocktails: I make Margaritas (tequila, lime juice and triple sec) and White Ladies (gin, lemon juice, triple sec, egg white) using both Solerno and Cointreau, and the former’s darker, sourer whole-orange flavour makes itself felt. Whether or not you think this is a good thing is a matter of taste. While I would far sooner drink Solerno neat than Cointreau—it is smoother and more multi-faceted—in a cocktail context it comes down to the essential difference of character, Cointreau’s straightforward high, bright, bitter-peel balance compared to Solerno’s more mid-note orange juice thrust.

Ted gave me another sample, of something called Royal Combier. I taste this too before finding out anything about it. It is yellow in colour rather than clear and the orange flavours are joined by a sandalwood spice on the nose and, on the palate, cloves, sandalwood, soft pepper, nutmeg and cinnamon. It is very moreish. I had guessed that perhaps it was a wood-aged version of Original Combier, but on the website I see that it is actually a blend of Original, VSOP Cognac and Elixir Combier, another ancient liqueur recipe created by founder Jean-Baptiste Combier and released in 1860. Like many famous liqueurs (and indeed absinthe and probably gin) it was originally intended as a medicine, a way of capturing the healing properties of plants in alcohol. This one includes aloe, myrrh, cardamom, cinnamon and saffron on the botanical list, and it was actually discontinued for decades before being reintroduced recently.

For comparison I also tried Grand Marnier, the famous Cognac-based orange liqueur. Dating back to 1880, this is a blend of Cognac and “distilled essence” of orange peels, plus a secret recipe of other ingredients. In this respect it sounds much like Royal Combier, though Grand Marnier is barrel aged after blending. In any case it tastes quite different—you can really taste the Cognac and it has a pronounced dry wood character compared to Royal Combier, plus prunes and liquorice.

I think that Solerno is definitely an interesting addition to the triple sec world. Drunk neat it beats Cointreau hands down, but as a cocktail ingredient it comes more down to a question of styles, with Solerno offering more sweet/sour OJ as opposed to Cointreau’s bitter/sweet rind emphasis. And then there is the matter of price: Cointreau is relatively affordable at £20 for a 70cl bottle, Solerno is almost double that at around £39. Probably too precious for cocktails, then!

Solerno can be had from The Whisky Exchange for £38.95

Posted by Clayton Hartley at 13:22