When is a Gin not a Gin?

In the last couple of years many new gins have entered an already crowded marketplace and, in a bid to differentiate themselves, some are putting a new twist on what gin is, flavouring it with berries or coconut or changing the colour, making it yellow, pink or even blue.

So let's look at the EU definition of gin. Below is a simplified definition guide, with the most technical details omitted—for the full specification please see EU Regulation: No 110/2008. 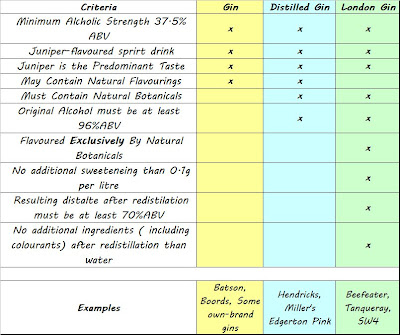 London Dry Gin can be made anywhere in the world as long as it adheres to the London Gin specification. Some brands have started to referred to their London Dry Gins, actually made in London, as also being "London Cut".


This leads me on to an interesting product I first encountered on the famous Gin Wall at Plymouth Distillery and subsequently revisited at the Eaux de Vie offices.

I have to admit that when I first tried this I mistakenly believed it was a gin (a non-junipery gin, for these do technically exist) but a gin nonetheless. A look at the bottle may suggest why: Square One contains eight botanicals, coriander and citrus peel (very familiar faces in the gin world) as well as rosemary, lavender, chamomile (all botanicals used in other gins) and pear, rose and lemon verbena (a flowering shrub).

Square One is made in Idaho Oregon and whereas technically I suspect it is a vodka it is described as a "Botanical Organic* Spirit"; it is made with rye. Square One also make a pretty tasty cucumber vodka** and regular plain rye vodka.

I have given Square One Botanical neat to a number of people and they've all mistaken it for gin—showing what an important part coriander and citrus play in the flavour profile of the average gin. Square One is sweet on the nose and certainly has the complexity of a gin. The citrus and coriander comes through and the mind may trick you into thinking you can taste juniper.

Given Square One's similarity to the juniper-spirit I thought I'd try it in a "Gin" & Tonic and a Martini.

"Gin" & Tonic
It is complex like a gin & tonic but for a moment you are fooled into believing it is one until you think, where's the juniper? Still, this is fresh and crisp like a good G&T. I'm not sure everyone would be able to tell the difference, (possibly blind I wouldn't have)*** but still it's a tasty beverage.

Martini
Here the difference is more acute this tastes like a flavourful vodka Martini with citrus, some sweet floral and a touch of herbs. Surprisingly sweet on the finish. Good, in terms of having a full flavour, as Vodka Martinis go but not as crisp as a Gin Martini and not as smooth as a standard Vodka Martini. An interesting middle ground between vodka and gin.

And that pretty much sums up Square One Botanical Spirit it is an interesting, but tasty, middle ground. If you want more flavour to your vodka but don't like juniper, this is a must-try. If you like gin, I'd give it a snifter too!

Square One Botanical Spirit is available for around £32 for 70cl from The Whisky Exchange.


*US Department of Agriculture certified, I'm not 100% sure how it complies with EU organic regulation. (Please see comment for further elaboration.)
** I lose track of who does and doesn't still make a cucumber vodka, Polstar and Blackwoods have made them but I think they may have been discontinued.
*** For clarification, the reason why Square One and Square One and Tonic could be mistake for gin is because, these days, not all gins have a predominant or even a dominant taste of juniper (despite the EU regs) so Square One could mistaken for one of those gins.

For those who requested it here is a list of all the GI Protected Gin/Juniper Spirits in the EU:

Posted by David Bridgman-Smith at 00:15

Email ThisBlogThis!Share to TwitterShare to FacebookShare to Pinterest
Labels: botanical vodka, gin regulations, gin wall, square one vodka, what is gin, what is london dry gin