The glory that was Moussec


I had the clan round to Schloss Hartley last Christmas and my father-in-law arrived with a few festive bottles that had been cluttering his shelves (he is not a great wine drinker). One was this curio here.

I vaguely remember Moussec, though younger readers could be forgiven for never having heard of it. As the label says, it was British sparkling wine: the word “British” is important here, denoting that the wine was made in this country but from imported grapes (“English” wine, on the other hand, is all home grown). As in the horror that is British sherry.

If the styling of the label weren’t enough to date it, I was intrigued to see that the alcoholic strength is given in degrees proof. This practice was replaced by the Euro standard of percentage alcohol by volume (ABV) in 1980, which I assume makes this bottle at least 30 years old.

It is surprising how little one can glean about this brand from a cursory online search. In 1932 the company moved into premises in Rickmansworth, though my bottle seems to have been made in Norwich.The latest reference I can find is to a TV advert (a mock- French couple are drinking it, with the slogan “Great leetle wines”) in 1980. Most references are to bottles, glasses or beermats for sale on eBay as vintage curios. 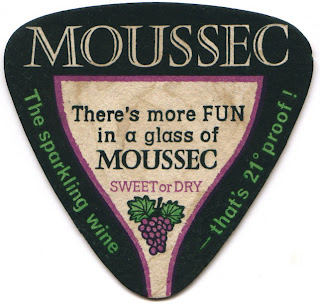 One assumes the idea is that by making the drink on these shores you avoid import duty, enabling you to make something with the glamour of bubbly but not the price tag. Perhaps as winemaking became more sophisticated around the world, it got easier for good quality, low-price fizz to be made in the countries where the grapes were grown, rendering Moussec’s ruse economically less viable. But if anyone out there knows anything about the brand’s fate, I’d be curious to hear.

I did find this strange story online: “During the war my mother worked shifts at the Moussec Champagne and Wine Company at Rickmansworth, but she never wanted to tell me how she had got on at work. At the front of the factory there was a huge glass window and I used to watch them filling the bottles and putting in the corks. I always thought it was a strange thing.We were in the middle of a war—who could possibly want all this wine and champagne! A few years after the war I was talking to a man who used to work there and I put my puzzling questions to him. He gave me a knowing smile and told me the town's secret. There was never any wine there at all! It was a facade. The people I could see came in everyday and filled bottles with water. The night shift emptied them again ready for the day shift to start all over again. Behind this facade was a tank factory! Every day tanks were made there and shipped out in the dead of the night. My mother had never said a word.”

I think it safe to assume the man was pulling her leg. But perhaps the subtext is: why would anyone make British sparkling wine?*

(UPDATE: For more on the Moussec story see this post.)

*Of course nowadays you can get some excellent English sparkling wine, such as Nyetimber which has won awards and everything. Although it is made by an American.