Strange fruit and the Moroney cocktail 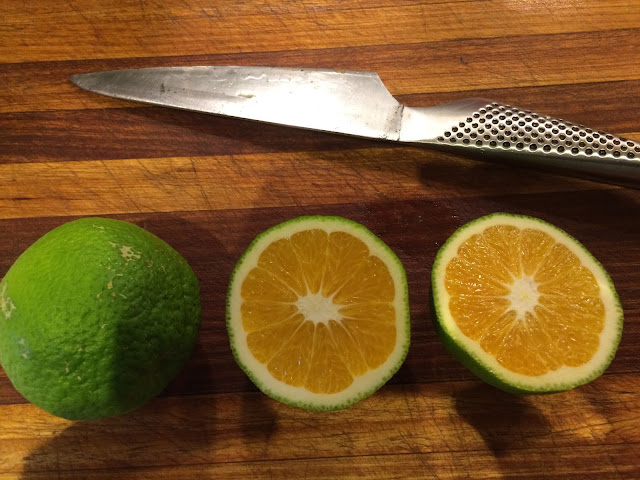 We have a couple of little fruit trees in pots, an orange and a lemon, which struggle to thrive in our London garden. Over winter we brought them indoors and I watched as the orange tree produced a couple of fruit. Sadly, it wasn’t very happy and started dropping its leaves until pretty much all that was hanging from its spindly branches were the two fruit, and the stems supporting them were the only green, healthy looking ones. I was hoping that they would in time look like, you know, oranges; but by the point they both dropped off last week they were still resolutely green.

After a week sitting in the fruit bowl they clearly weren’t about to change colour, so I sliced one open. Rather gratifyingly, the inside looked just like an orange. A little on the small side, but nevertheless orange and juicy, like an orange should be. Its juice was somewhat astringent, but definitely orange juice.*

In fact the combination of the green skin and orange flesh is rather striking and, in combination with the white pith, reminiscent of the Irish flag. When I thought about cocktails traditionally garnished with an orange slice I immediately hit upon the Negroni (equal parts gin, Campari and red vermouth) and, to give it an Irish twist I tried using Irish whiskey instead of gin. Or course there is every reason why this should work, since the same thing with American whiskey is a Boulevardier, and I’ve noticed in the past how Irish whiskey, with its milder character than Scotch, lends itself better to cocktails.

Ladies and gentlemen, I give you the Moroney. And very well it works too, with the caramelly warmth of the whiskey balancing the herbal bitterness of the amari with a bit of sweetness from the vermouth (I used Martini Rosso and Jameson whiskey in this case).

I wish I’d thought of this in time for St Patrick’s Day last month. Perhaps I can pretend it is to mark the 101st anniversary of the Easter Uprising…

*When I posted a photo on Facebook a friend observed that once upon a time oranges were actually green, until later being bred to have orange skin, so I can tell myself that we must have a Heritage Orange Tree.
Posted by Clayton Hartley at 04:26 No comments:


Along with the fashion for cider (or “cyder” as the really poncey brands have it) comes “vintage” cider. In some cases this doesn’t actually seem to mean the cider has a vintage as such, merely that it is “vintage” in style, but here in the UK mainstream brands such as Weston’s and Thatcher’s do produce aged ciders of a specific year.

I recently had a chance to do a vertical tasting, albeit under rather unscientific circumstances. My sister lives in rural Kent and has a few apple trees in her large garden, so every year she gathers friends and family for a rather messy cider-making party. Small children are sent up into trees to gather the apples, which are loosely chopped by cackling crones, then “scratted” into a pulp. Scratting involves a machine so that job is done by blokes.* The pulp goes into a pleasingly old-fashioned wooden press and the resulting juice is fermented in plastic bins or glass demijohns with bubbling water valves to let the CO2 out but ideally let nothing in to contaminate the cider. In all, each year’s harvest makes about 70 bottles. Mrs H. and I traditionally compose labels for each vintage in time for Christmas which is roughly when the cider is ready for bottling. As a joke we named it Chapple Downer (there is an commercial vineyard in Kent called Chapel Down; my sister’s married name is Downer and the cider is made from apples) and the name has stuck. 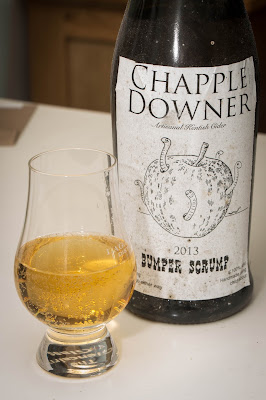 It’s a nicely circular process, because by the time of each event the previous year’s cider is drinking nicely and the cider-making party consume quite a lot of it in the process. (For this reason the 2015 vintage was named Perpetuum Mobile—perpetual motion.)

Anyway, my sister gave me a set of 2013, 2014 and 2015 samples at the end of last year, so earlier this year I invited DBS along for this rare chance to try them all together.

2013 Bumper Scrump (so named because it was a bumper crop that year)**
Nose: Instead of fresh apple, it is more like baked apple. Extraordinarily it seems to include aromatic cinnamon and clove notes and raisins too. I keep wondering if this is just suggested to me by flavourings you might add to baked apple, but it does genuinely seem to be there.
Palate: The same thrust as the nose. It’s dry, but not mouth-puckeringly dry. The acidity is well balanced, with a hint of bitterness on the finish. Although bottled as a sparkling cider (with a supposedly calculated dosage of extra sugar for a controlled secondary fermentation) this bottle is not really fizzy any more, but it is nevertheless zesty and refreshing. But overall its character is deep, dark, complex cooked apple. 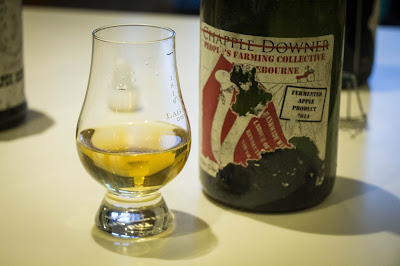 2014 People's Farming Collective of Littlebourne Fermented Apple Product (I think the name was a reference to the sheer number of people involved in the production)
Nose: Although this sample seems slightly darker in colour than the older cider, the nose is less profound, with more fresh apple and less of the spicy baked apple.
Palate: Properly sparkling with a delicate mousse. Slightly sweeter and more appley than the 2013. But there is a dark fruity weight on the tongue which makes you think that in time it would mature into the spiciness of the 2013.

2015 Perpetuum Mobile
Nose: Essentially similar to the 2014
Palate: Balance now is too much towards the acid, making it not quite comfortable to drink. Interestingly, this bottle was stoppered and left for a day or two, after which its pale colour had darkened (presumably through oxidation) and the palate had mellowed a bit.***

Of course all of this ignores the fact that, especially with production on a haphazard, domestic scale like this, not only will each year’s harvest differ, but the fruit going into each squeeze of the press and each of the various fermenting containers may not be consistent in terms of either quality or balance between different varieties (there are different species of apple tree involved, including a quantity of crab apples, which are apparently important, although nothing is measured very precisely). Different demijohns will ferment differently depending on the sugar present, the viability of the yeast and any accidental infections.

However, there does seem to be a pattern apparent where the youngest cider is acidic, dry and most redolent of fresh apple, then as it ages the attack softens and deeper spicy notes appear. The 2013 is very interesting, and not like any commercial cider I have tasted; DBS said it was by far his favourite, but I think some people might find it a little too over-mellow, and it would be harder to partner with food. The 2014 probably has the best balance between these complexities and the basic package of fruit, tannin and acid, while the 2015 gives the impression of not quite being there yet.

* The first year the scratter was a crude blade attached to an electric drill, which was spun round inside a plastic bucket of apples. Last year we tried using a cheap garden chipper. This was pretty effective at first, but after a while the engine started cutting out. The blokeyest of the blokes starting taking it apart, gradually bypassing switches and safety cut-offs in the hope of getting it going again: eventually is was pretty much just a motor wired into the mains, and it still didn’t work so we had to concede defeat at this point and scratted the rest of the apples in a food processor. Which was pretty effective too.

*** I’ve just tried it again now, some weeks after it was opened, though it has been kept stoppered. It is now frankly brown in colour, but has taken on a Fino sherry note, that high aromatic edge that reminds me of Bostik glue (but in a good way). It’s aggressive, and you feel you wouldn’t want to leave it in contact with your tooth enamel for longer than necessary, but actually quite interesting. I wonder if some sort of flor has developed…

Posted by Clayton Hartley at 13:04 No comments: