It seems this is the third time I’ve said “I don’t usually do unboxings”, but once again That Boutiquey Gin Company have pulled the stops out and it would be churlish not to give them credit. 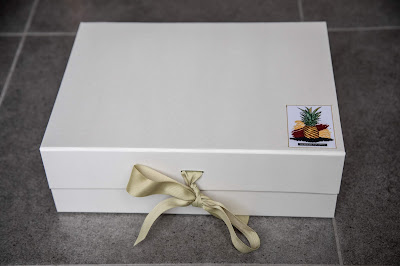 This package arrived unannounced on my doorstep: at first I thought it was a slipcase for a high-end book (not that there is any reason someone would send me one of those). In fact it is an elaborate promotional pack for TBGC’s spit-roast pineapple gin. As you can see, underneath some flyers is a tote bag, then the actual gin, plus some ginger beer, a metal straw, a burlap pouch containing a couple of limes and an enamel lapel pin.* I didn’t open the box immediately, making a mental note to do so when I had the opportunity to take photos, but it’s just as well I didn’t leave it too long—it didn’t occur to me there might be fresh fruit inside…** 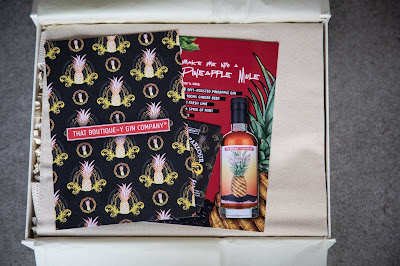 TBGC have a track record of making oddly-flavoured gins that nevertheless show poise and skill in the balance of flavours, avoiding the trap of just making a gooey fruit liqueur that is a gin in name only. Here the first thing you’re probably asking yourself is, “OK, it’s a pineapple gin—but why specifically a spit-roasted pineapple gin?” My guess is that it was the flavour of caramelised pineapple that inspired whoever came up with this. We’ve probably all tried pineapple that has been grilled or sautéed, but I confess I have no experience of the precise qualities of pineapple that has been spit-roasted, as opposed to being cooked in any other way. But I’m willing to believe TBGC’s pineapples have been treated in this way. (I went to the Master of Malt offices once, which I assume is where TBGC is based, and it was a bit like wandering through Q-Division in a James Bond movie. In one room someone was experimenting with dipping bottle necks in wax, and I’m sure I saw a carboy where they were finding a way to pump smoke through some vodka.)

Apparently pineapple gin was, like orange gin, a Thing in the early 20th century. TBGC say their pineapples are roasted on a spit with Demerara sugar, so clearly the processing is all about getting that caramel flavour.

The gin does indeed have a caramel element to it. There is obviously pineapple there too, but once again I am struck by the fact that it is still definitely a gin. In fact I could believe that that juniper levels have been made especially pronounced to make sure they poke through. And there is no clash here: the tart, fruit flavours do harmonise with the dry steel of the juniper. 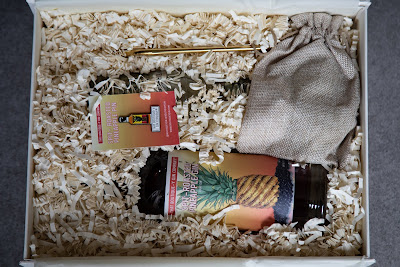 On the nose you are struck, first and foremost, by the juicy fruit of pineapple, its distinctive flat, waxy elements blending with juniper. Below is the dark caramel layer. Here and there other gin botanicals, floral or savoury, seem to pop up, but only fleetingly. On the palate is where the juniper really pushes through, making a rich and intense drink.

Unsurprisingly, the spirit has been sweetened, which most fruit gins seem to be (I guess in the tradition of sloe gin, which in fact is a useful analogy to how the pineapple gin works—and in fact when we did our sloe gin taste-off I did find that my favourites where the ones that still had strong gin flavours in them, such as Hawker’s, which sadly no longer seems to be made). I don’t have much of a sweet tooth, so it’s not a drink I would drink neat, but cocktails seem an obvious way to go, given that many of them feature a balance of sweet and sour ingredients.

In fact logic would suggest that just adding citrus to this gin would create a sort of proto-cocktail of gin, sweetness, tartness and fruit, and indeed this does work remarkably well. I try it with lime juice and neat it is a bit intense, but if you lengthen it (I just used water), you suddenly get a balanced drink. I can imagine that the pineapple gin, lime juice and soda water, over ice, would be a delight to sip on a summer’s day.

I expected the TBGC website to feature a number of cocktails using this gin, but in fact I can’t find any. Instead they seem to be pinning their hopes to the Pineapple Mule, essentially a Moscow Mule made using spit-roast pineapple gin instead of vodka. The ingredients are the elements there were included in my surprise package.

It’s a deft concoction, essentially like the highball I describe above, but with the ginger flavours too—and even though ginger beer will have some sugar in it too, the overall drink does not come across as too sweet. (The ginger beer included is Fever Tree, which may be less sweet than some others.) 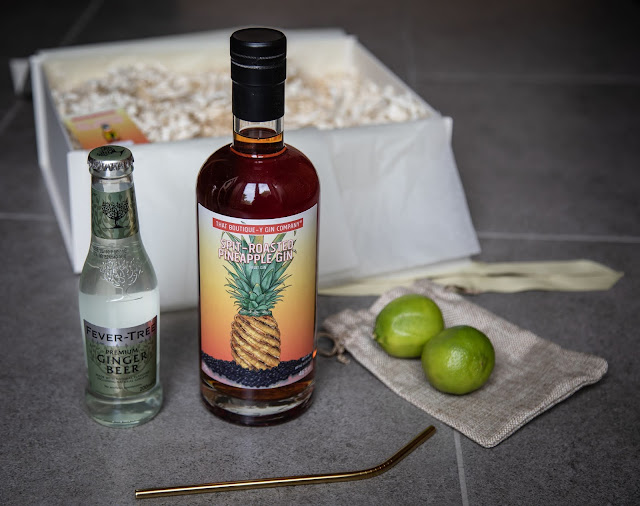 You can try making your own Pineapple Mule at home easily enough (the photo at the top is one I made last night, using mint from our garden). But if you’re feeling lazy and you’re London-based you can pop into TBGC’s pop-up pineapple gin parlour at 15 Bateman Street.

Give the password “Mule” and you’ll get a complimentary cocktail.

The pop-up opened yesterday and will close tomorrow, so get down there ASAP. Since today is, apparently, International Pineapple Day, what could be more appropriate?

* I freely admit that was just an excuse to say “burlap pouch”, a phrase I have been joyously rolling around my mouth for days. I mean, we don’t even call it burlap here in the UK, but somehow “hessian pouch” isn’t quite the same.

** Mrs H. nodded approvingly at the reusable metal straw (I just hope its easy to clean), but curled her lip at the lapel badge (is it recyclable?). As for the tote bag, she has spent several evenings now trying to scrape away the printed logo with a scalpel. I suggested an electric sander but she favours a less invasive treatment. If she succeeds in producing a plain tote bag without any gin advertising on it, I think she will be placated.

Posted by Clayton Hartley at 06:45 No comments: