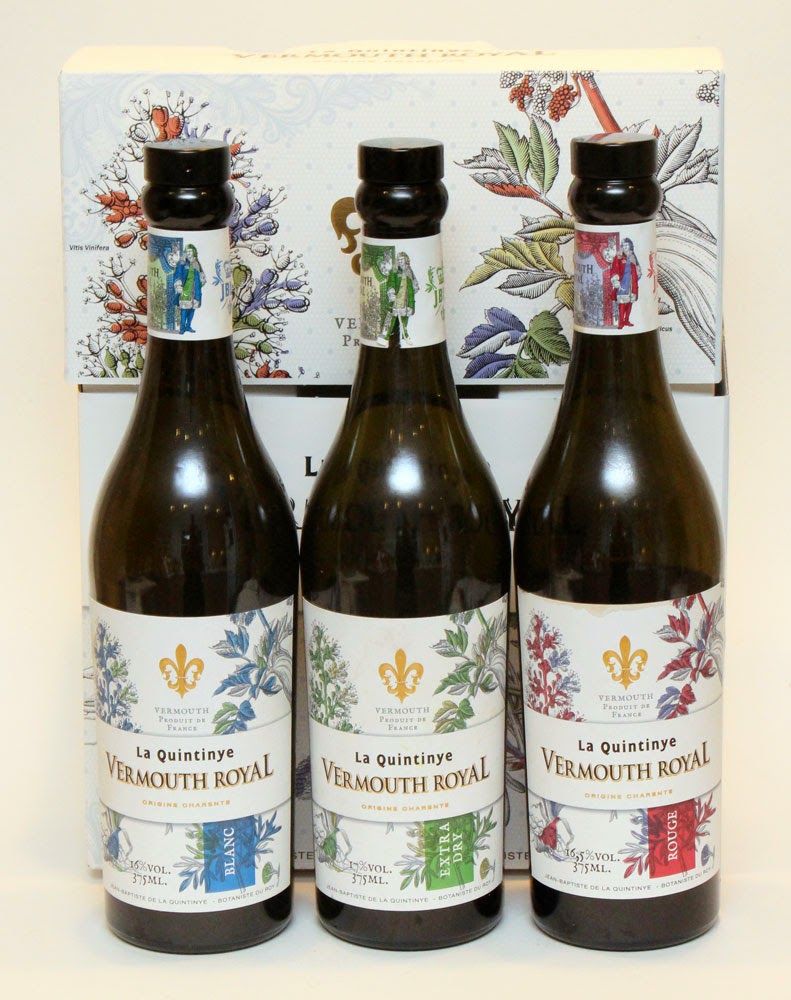 Vermouth, the aromatized wine that mostly hails from France or Italy, is one of the founding cocktail ingredients, along with spirits and bitters (and like bitters vermouths were often medicinal in their original conception). Yet, while every week brings another new gin, it is not often that someone launches a new vermouth. So I was interested to be invited along to the launch of the Quintinye Vermouth Royal range.

The three products, a Blanc, a Rouge and an Extra Dry, hail from Eurowinegate, the folks behind G’Vine gin, and the launch showed a familiar head-on aplomb. The venue was the Café Royal (geddit?), in the extraordinary grotto of mirrors and gold ormolu that is the Grill Room. Various staff, including Gaz Regan, were drifting around dressed like courtiers from 17th-century Versailles. (The DJ was so attired as well, though, disappointingly her music occupied fairly safe house territory with not a tinkling harpsichord to be heard.)

So what is “royal” about this vermouth? And what’s with the name? DBS was there and grumbled about the moniker, which he thought was obscure and complicated. He may have a point: if someone can’t pronounce the name of a product are they less likely to buy it? As it turns out, the range is named after Jean-Baptiste de la Quintinye, botanist to King Louis XIV of France. Quintinye was commissioned by the Sun King to create the kitchen gardens at the Palace of Versailles, and each bottle of the vermouth features a drawing of him. The manufacturers like to think they are carrying on in the tradition of this herbalist visionary.

These vermouths are created in the Charentes region, home of Pineau des Charentes, a sweet “wine” that is created by blending grape juice with Cognac, a process that preserves some of the delicate characteristic of the grape which might normally be lost in the fermentation and distillation process. Pineau de Charentes is used in the blends of wines that go into these vermouths and this seems appropriate, given that G’Vine gin, as well as being based on grape spirit, includes vine flower in its botanicals (as do all the Quintinye vermouths). Clearly EWG are all about preserving the essence of the fruit that lies at the heart of all their products, the grape.

In addition to this unusual wine base (plus some Cognac for fortification) the vermouths contain a wide array of infused botanicals—18 in the Blanc, 27 in the Extra Dry and 28 in the Rouge. Chief among these is wormwood; this may be something you had associated with absinthe, but in fact vermouth (the name of which derives from vermut, the German for wormwood) must contain it under EU regulations. (EWG’s Jean-Sébastien Robicquet points out that in the US anything with wormwood in it must be submitted for testing by the FDA—presumably still wary of it because of its association with the long-illegal absinthe—and since many producers can’t afford the $10,000 fee, they prefer to leave that ingredient out. Mind you, I doubt that many consumers will be intrinsically outraged to discover their vermouth contains no vermut, even if they might prefer the taste of vermouth with it in.)

We start our tasting with the Blanc. The nose is rich, sweet, with hints of orange, cucumber and grapefruit. It reaches out to your with a gentle but enticing floral aroma, with elderflower, a whiff of coal tar and a faint earthy bitterness. In that latter respect it actually reminds me of Campari a little. On the palate there is an unexpected dimension: it’s a sort of slightly sour, slightly over-ripe floral note that I get from some white absinthes, and I suspect it comes from the wormwood. It vaguely reminds me of Plasticene and I’m not keen on it. But overall it is a subtle drink, with a honeyed underlying sweetness, not cloying at all. I can see this appealing as an aperitif chilled on its own or over ice.

Next up is the Extra Dry, staple of the classic Dry Martini. There is a strong family resemblance to the Blanc, but it is more intense—that twisted floral element that I’m not keen on is much more prominent and there is not the inviting, fruity sweetness of the blanc. It is sharper and drier with a tarragon/anise pungency, and notes of bergamot and pencil lead.

Although these are clearly sophisticated, subtle blends, I have to confess that I’m not that keen on them neat, because of the dominance of that (I assume) wormwood element. But how many of us drink vermouth neat? And I quickly discover that in a cocktail context these are different beasts. Mix either of these with gin to make a sweet or dry Martini and that disconcerting element vanishes (in all but the wettest mix). Using Tanqueray as a fairly classic sort of gin, a half-and-half band with the Quintinye blanc produces a highly approachable drink with juniper to the fore but the mellow fruity sweetness of the Pineau curling seductively around the edges, warming orange, and finally some spicy/bitter sparks firing off at the end.

Even at 50:50 (far wetter than most people would make it) a Dry Martini with the Extra Dry is not as disconcerting to me as the stuff is neat. And at 4:1 (how I normally make a Dry Martini) the balance is perfect: the gin’s juniper and coriander forces are marshalled at the front, but the softening floral, honey and herbal notes are right behind, and in the mouth the fresh bitter-sweet contributions of the wine are just right. It’s the sort of thing that reminds you what the point of a Dry Martini actually is. I’m still not that keen on the pronounced wormwood flavour (if such it be) but this is nevertheless a sophisticated vermouth that has been thought through from the ground up.

At the launch the final product we tasted was the rouge. The wine blend includes red Pineau des Charentes, which is noteworthy—most red vermouths are actually based on white wine. Tasted neat, for me this was the star: a rich and fascinating nose of red berries, raspberries, orange, cinnamon, marshmallow, celery, raisins, careering between sweet and aromatic and drily bitter. This continues on to the palate with pronounced coffee notes and some chocolate, roses, parma violets, gentian, cedar wood… As you can see it evolves constantly.

One of the classic red vermouth drinks is the Negroni (equal parts red vermouth, gin and Campari) and EWG are clearly using this as their signature serve: most of the drinks served on the night seem to be variations on this and we are all given a special edition of Gaz Regan’s book dedicated to this cocktail. At the time it strikes me that the Quintinye has many of the elements of the Negroni already going on, so later at home I see what happens if we add one part gin to two parts Quintinye rouge. Straightaway the high juniper waft marries well with the warmth of the vermouth, before the latter begins to assert itself again in a jammy, chocolately way, with still those spikes of bitter root-notes. Dial in some more gin (taking it in a Martinez direction) and it still works, with a woody, cinnamon flavour seeming to emerge between the two ingredients. Unsurprisingly it starts to remind me of the sweet and dry Martinis. Although pretty much all of the Quintinye botanicals are found in gin (though not necessarily in Tanqueray, which famously has only four, juniper, coriander, angelica and liquorice), perhaps it is the fact that the botanicals are infused rather than distilled that allows the vermouths to bring a fresh, bitter-sweet, fruitiness to compliment the gin and make for a more complete drink.

And of the Negroni? The launch event peppered us with different recipe variations, but sticking with the classic blend of equal parts gin, red vermouth and Campari, I compare a Tanqueray-based version using Quintinye red with one using Martini Rosso. Aside from a darker, redder colour,* the Quintinye is softer, smoother, sweeter, with a more evolving subtle complexity, while the Martini is high, dry and herbal. Some may prefer the sharper combo with the Martini (and, much as I love Antica Formula in a Manhattan, for example, I have always believed that it makes a less satisfactory Negroni than Martini Rosso); but the Quintinye certainly makes its fresh, vivid character felt.

The other classic red vermouth drink must surely be that Manhattan, so I give that a try. Even with a cheap bourbon, the Quintinye rouge has quite a transformative power—the pronounced wood and sweet characteristics of the whiskey blend easily enough with the wood-spice and Pineau elements of the vermouth, but the latter brings much more besides. Even outnumbered by the bourbon two to one, it softens the rough edges and unfurls bitter, sweet, floral and aromatic tendrils in all directions. Compared side by side with Noilly Rouge, the Quintinye strikes me as actually less sweet and more subtle, a characteristic I would extend to the whole range: once I started mixing with them I found you could blend in quite a high proportion without the vermouth taking over.

As you can probably tell, I am favourably impressed by the Quintinye range. Even though I am iffy about the wormwood character in the Blanc and Extra Dry, there is a fresh, subtle, three-dimensionality to all the products that makes you rethink the whole point of vermouth. I haven’t felt this taken by an aromatised wine since I discovered Cocchi’s irresistible Barolo Chinato.

One other thing I like about this range is the acknowledgement that most of us drink vermouth in small quantities: although full bottles exist, we were sent home with 37.5-centilitre half bottles, and very dark bottles they were, with solid rubber/plastic bungs—all of this intended to preserve the freshness of the precious liquid. If you have read my woes about trying to avert the spoilage of vermouth, you will understand that I view this attitude as all too welcome.

Moreover, my new favourite aperitif is now a half-and-half mix of gin and Quintinye Blanc, topped up with tonic water and garnished with a lime slice—I call it a GQ&T, essentially a G&T with the added fresh herbal/floral infused flavours. By mid-summer all the kids will be drinking it, you mark my words.

* In fairness the Martini has been open a while, so oxidation may have turned it browner than God intended.
** As in Gin, Quintinye & Tonic, I'm surprised there aren't more cocktails involving tonic water (expect a post from me soon with some of my favourite G&T variants), although I recently realised that this "creation" of mine is not a million miles away from the clericot prepared for me by Argentine cocktail god Tato
Posted by Clayton Hartley at 11:00 No comments: