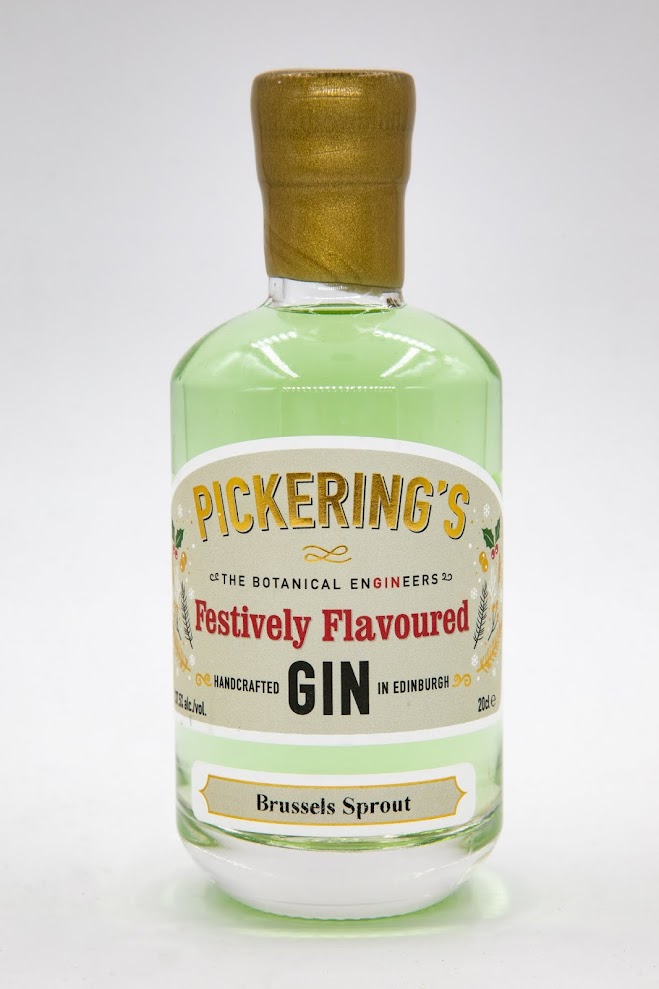 A couple of summers ago we were visiting friends in Edinburgh and they suggested we stopped in at Summerhall where they made their own gin. This turned out to be Pickering’s Gin, and very nice it was too. The backstory is of a recipe dating from 1947 in Bombay, kept a family secret until they decided to start distilling at Summerhall. (There’s always a story like that, isn’t there?) The botanical bill for their main gin includes juniper, coriander, cardamom, angelica, fennel, anise, lemon, lime and cloves. They also make a “1947 edition” which adds cinnamon. It’s a fairly modern style of gin with an emphasis on smoothness. Their suggested serves and cocktails often have an emphasis on citrus.

So I was interested to see that they have produced, for the festive season, a Brussels sprout gin. You read that right. The famously divisive pellet of pungent-bitter cabbage-iness. Moreover, this is apparently the third year they have produced it, such is its popularity. How could I resist? OK, I was suspicious enough to order only a 20cl bottle, so I needed to be careful how I deployed my limited supply.

The first thing you notice is that it is green. I have no doubt, however, that the colour is artificial, added for gimmickry—it’s a rather bluish green which, in the world of absinthe, is a sure-fire sign of artificial colouring. The colour from naturally green absinthe tends to a more olive shade, and it is rather unstable, particularly when exposed to light; hence such absinthes tend to be sold in very dark bottles. So the hue of this gin in its clear glass bottle is presumably fake.

Upon uncorking the bottle I actually laughed out loud. Sure enough, there was that sharp, sour, sulphurous note that some reviewers describe as “cabbage water”. But it quickly resolves itself into something like turmeric—Mrs H. commented that it had a curry smell. There is an element of rubber too. All very savoury. On the palate this continues, though clear juniper comes in too, with a slightly bitter, peppery finish. It’s quite “dark”, with caramel notes (without being sweet), but altogether less pungent than you might expect.

I try a Martini using Belsazar Dry vermouth. Adding the vermouth seems to release a new waft of that initial cabbage aroma, though on the palate the savoury character of the gin seems to go quite well with the herbal elements of the vermouth. Well, they don’t clash, which is perhaps not quite the same thing. Is it nice? I’m quite a fan of savoury, herbal gins, but I have to say—no. “Not as horrible as I was expecting,” was Mrs H.’s verdict on the Martini, which is about right. But the truth is that there is little joy to be had from this drink.

I couldn’t resist trying an Aviation (gin, maraschino, lemon juice and crème de violette), partly because it is one of my go-to cocktails for testing gins, but also, I admit, because I wanted to see what colour it would be. As you can see, between the green of the gin and the violet of the violette, it’s a rather muddy colour. Taste-wise, it is not a success, a constant argy-bargy between the delicate juniper-fruit-floral axis of the cocktail and the sulphur-savoury thrust of the gin, which elbows its way through now and then. It is not a harmonious combination; it’s a cocktail that exists in spite of its ingredients rather than because of them.

Given the vegetal nature of this drink I wondered how it would work in a Red Snapper (a gin-based Bloody Mary), and I see on their website this is indeed a recommended serve. I also wondered how it would work in a Last Word (gin, lime juice, maraschino and green Chartreuse). But by now I’d used up about half of my 20cl so I had to choose my experiments carefully. I made up a scaled-down Last Word and I do think that it is a place where this gin can feel accepted, its savoury intensity standing shoulder-to-shoulder with the herbal intensity of the green Chartreuse. With both the Chartreuse and the maraschino it is potentially quite a sweet cocktail, but the gin keeps making savoury, almost salty, sallies on to your tongue. Having said that, Mrs H. still made a face like Beelzebub had just tried to steal her tongue. She is not a fan.

It seemed sensible to try this gin in a straightforward G&T. From my earlier experiences I guessed that adding the tonic would stir up a hornets’ nest of sulphurous swamp tones, but in fact it worked better than I expected; there’s a mysterious synergy between the tonic and the gin. The recommended garnish is a strip of cucumber; in fact cucumber and elderflower crop up as key ingredients in a number of the showcase drinks, which gives you some idea of exactly how the sproutiness translates into a gin flavour. As you can see, I bowed to that suggestion and garnished my drink with a long strip of cucumber peel and a single, noble sprout. You can, of course, immediately pick up the sprout-note on the nose, though I must concede that there is something in common between the sprouts and the cucumber. However, after much consideration I would have to say that the cucumber does not emerge well from the association; while we tend to think of cucumber as fresh and herbal in a zingy way, this drink, while not repulsive, does seem to emphasise less pleasant botanical associations. It’s as if the cucumber has fallen in with a bad crowd, that brings out its less pleasant side.

Would I recommend Pickering’s Brussel sprout gin? No. Although it has some polish, you ultimately find yourself longing for the underlying gin without the sprouts in it. If you fall into the camp of those who actively like sprouts (and I do), and you like herbal, savoury gins, you might want to try this one. But don’t say I didn’t warn you. 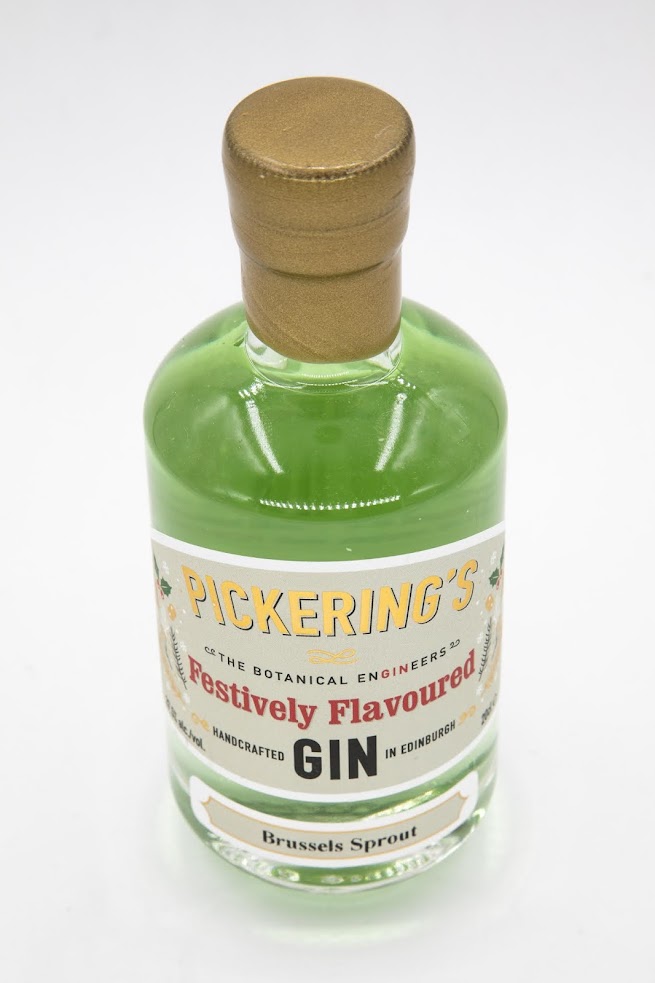 Posted by Clayton Hartley at 02:13 No comments: