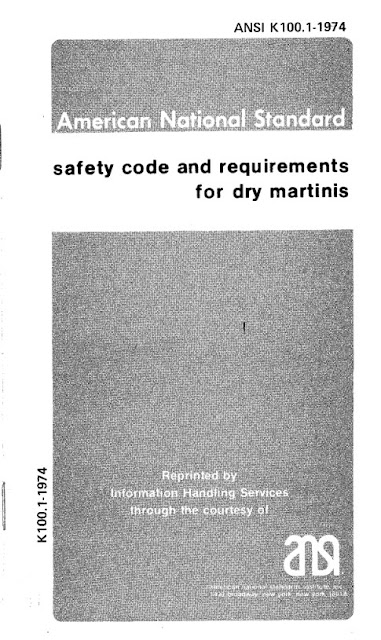 A friend has drawn my attention to a curious volume, the American National Standard Safety Code and Requirements for Dry Martinis, which you can view online here.

Evidently it was produced as a tongue-in-cheek publicity stunt to raise awareness of the American National Standard Institute and its work, but there are some interesting observations to make nevertheless.

Whoever wrote the pamphlet (or whatever committee) nails their colours to the mast—they like their Martini dry, with just 5% vermouth for lower-strength gins, and it must be served with an olive, pitted but not stuffed, or alternatively no garnish at all. Lemon peel and the Gibson’s cocktail onion are verboten.

There is a curious emphasis on colour, which must be as pale as possible. It’s true that Dry Martinis do tend to be pretty pale because they are mostly gin, but I’m guessing there is an unconscious sense that paler = purity and strength, especially in the macho world where you are supposed to strive for the driest Martinis possible. There is even a suggestion that vermouth manufacturers had responded by making their products paler, which is something I hadn’t thought about (but then I wasn’t drinking a lot of Martinis back when this pamphlet was released, so I don’t know if vermouths used to be more coloured). Certainly they do vary—Belsazar Dry, one of my favourites, is actually pretty dark (and probably gets darker if you allow it to oxidise after opening). Oddly, the text states that, “The colour shall be either water-white of faintly blue”. Blue? I’m assuming this is poetic license, derived from the idea that something can be so white that it is bluish, but I must say that if my Martini were blue I would send it back. (There are some gimmicky gins that are coloured blue but we don’t talk about them.)

And these drinks are big. I doubt that any official publication today would breezily announce that a “regular” Dry Martini should contain 3½ ounces of gin—over here in Europe that is 103.5 ml, which is over four units of alcohol. (For a long time the UK government’s maximum recommended intake for a man was 3–4 units a day, though the spoilsports later reduced this to 2–3, and I have a feeling they may recently have reduced it further.) If you fancy saving time and having a double you’ll be swallowing 2–2½ days’ worth of alcohol allowance in one drink. Drink responsibly, kids. 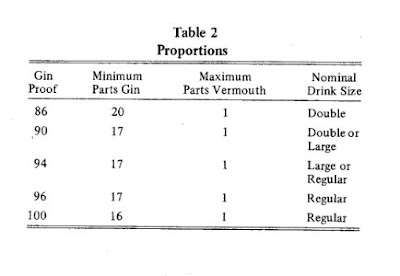 On the subject of olives, it is curious that the guide seems to suggest that maximum olive size for a large Martini is larger than for a regular, but for a double it goes back down to the same size as a regular. Perhaps the message here is that choosing a large Martini is an aesthetic decision, whereas choosing a double is simply a matter of alcoholic need. Or it may just be a typo.

It terms of mixing, no mention is made of shaking. A Martini must be stirred (and there are many who agree here) or blended from pre-chilled ingredients (what my colleague Mr Bridgman-Smith calls the “Diamond Method”). Interestingly they also mention the “radiation” method. This is presumably a reference to the old joke, attributed to Winston Churchill, about making a Dry Martini by simply allowing a shaft of sunlight to pass through a bottle of vermouth on to the gin. Curiously the sunbeam here is replaced by a 60-watt bulb. Either this is a self-consciously urban adjustment, or it is purely logical, based on the idea that if it is Martini time then it might well be the evening, so there is no sunlight. Or it could simply be a pseudo-scientific trope—by specifying the wattage of the bulb and the distance between all the objects you can control the precise amount of light.

The whole tone of the pamphlet reminds one of Jazz-Age wags like Robert Benchley, so it is surprising that this was actually published in 1974—surely well into the cocktail Dark Age, between the Golden Age and the New Golden Age, where we apparently are now. I’m sure that some Dry Martinis were still being consumed in the 1970s but they could hardly have felt like part of the zeitgeist. You can’t help wondering if what this shows us is simply how glacially the mechanisms of official bureaucracies actually work. Some bright spark at the Institute probably had the idea for this gag in 1928 but by the time it had passed through countless committees and sub-committees somehow 26 years had passed…

Of course right-thinking drinkers would probably bristle at the very idea that cocktail recipes should be standardised by any central agency—what scope does that leave for bar-room arguments, varying ingredients or indeed for personal taste? But in fact in 1937 the UK Bartenders Guild produced a volume for professionals entitled Approved Cocktails (later incorporated into the Café Royal Cocktail Book for consumers), which attempted to do precisely that. You can see it online here.
Posted by Clayton Hartley at 05:22 No comments: