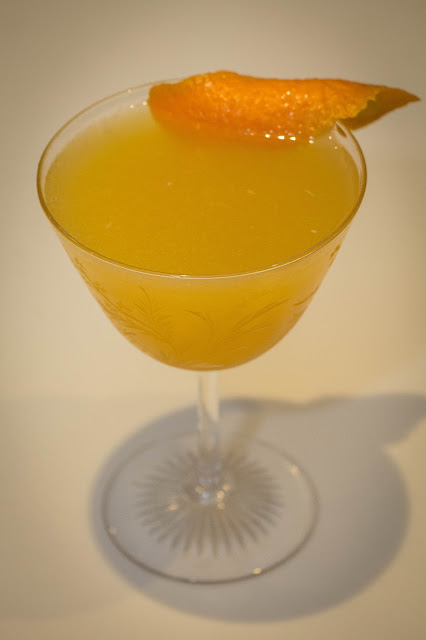 Early in one’s drinking career one will encounter spirits lengthened with mixers—gin and tonic, rum and coke, perhaps whisky and ginger ale (or whisky and soda water, if you are of a different generation). It was when I was a student that I first encountered gin and orange juice. I was sceptical, as I was inclined to think of OJ as a wholesome breakfast beverage, not a louche partner-in-crime to the Demon Drink, the innocent-faced, outwardly respectable enabler that distracts you from the hard spirits you are guzzling. It didn’t not work, but it was clearly intended as a way to mask the flavour of the spirit.

It was later, when I had found a copy of Cocktails and How to Mix Them (1922) “by ‘Robert’ [Vermeire] of the American Bar, Casino Municipale, Nice, and late of the Embassy Club, London”, that I first encountered the Monkey Gland cocktail. The name comes from experiments conducted at the time by surgeon Serge Voronoff, who believed he could boost longevity/virility by surgically implanting monkey testicle tissue into men. The cocktail was created by Harry MacElhone, who opened Harry’s Bar in Paris (though Vermeire identifies him by his tenure at Ciro’s in London) and I assume the name was chosen to suggest that the effect it had on the drinker was invigorating, even rejuvenating—and not that it left you feeling like you’d just woken up from surgery (or, even worse, feeling the way the monkey did when, and if, he woke up).

It’s a mix of gin and orange juice, with grenadine and absinthe. Recipes vary, but it is roughly equal parts gin and OJ, with small quantities of the other two ingredients. I tried it at the time, using Pernod (this was the 1990s and absinthe hadn’t made its triumphant return by then) and commercial grenadine, and I don’t think I was terribly impressed. 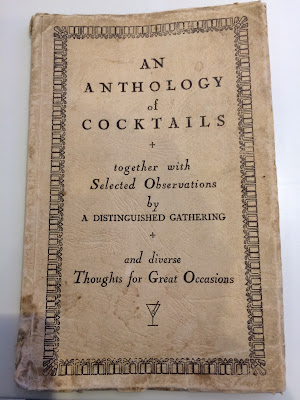 I was reminded of this drink again when Mrs H. recently gave me a copy of An Anthology of Cocktails, put out by Booth’s gin in 1935.* It features a whole list of celebs of the time with a recommended cocktail for each one and a cheesy testimony from them on the glories of Booth’s. For example, man of the turf Lord Westmorland declares, so we are led to believe, “A cocktail without Booth’s is a cocktail under a handicap,” while actress Sybil Thorndike asserts that, “A cocktail in which Booth’s plays a leading part receives an enthusiastic reception from the most captious critics,” while racing driver Brian Lewis blurts, “A party without Booth’s is like a car without wheels.” Quite how the Great and the Good were persuaded to lend their names (and indeed their signatures, printed alongside) to these abortions of the copywriter’s art boggles the mind.

The volume also includes a list of London clubs and theatres that serve Booth’s and a list of top barmen from the city with their favourite Booth’s recipes. You can see a page-turning PDF of the whole book at https://euvs-vintage-cocktail-books.cld.bz/1955-An-Anthology-of-Cocktails.

The Monkey Gland as such does not appear—the cocktails recommended by Booth’s for the celebs do tend to have a name that is relevant (Brian Lewis gets the Self Starter, winter sportsman the Earl of Northesk gets the Snowball, Ivor Novello gets the Star, etc), so I doubt that any of them would have appreciated being paired with the Monkey Gland—but it does feature a number of cocktails that similarly feature fruit juice not as a mixer to lengthen but as an ingredient, in amounts less than that of the base spirit. The Star, for example, is half-and-half gin and Calvados, plus a dash each of French and Italian vermouth, and only a teaspoon of grapefruit juice. The Smiler cocktail, recommended by horse breeder Tom Walls (“Would that the pedigree of a horse were as reliable a guide as the name of Booth’s on a bottle of gin,” he creaks) is essentially a Martini made with a blend of French and Italian vermouth, Angostura bitters and just a dash of Orange juice.

As it happens I had an orange looking for a purpose in life, and I was inspired to give the Monkey Gland another go. The upshot was most uplifting but I had to do a lot of experimenting to get there.

In the first instance I would say that the proportions are probably the most important part. Get the gin/OJ balance wrong and things go awry. Exactly how much grenadine you use may depend on how sweet your tooth is; but it is very easy to throw the whole thing out by using too much absinthe—in one attempt I escalated the absinthe to a whole ½ tsp and it ruined the drink. It should be a playful suggestion of pungent herbal flavours lurking in the background. The simplest way to keep that under control is to start by rolling some absinthe around your mixing vessel, then pouring it all out back into the bottle. What is left clinging to the sides of the shaker is all you need.

I also found that squeezing the orange juice freshly makes a big difference. It doesn’t exactly fail with commercial OJ from a carton, but this will make a more watery drink. Juice squeezed from an orange is sweeter and more intensely flavoured, with sharp aromatic notes from the rind oils. I imagine that when all these early cocktails with small amounts of fruit juice were developed, cartons of ready-squeezed juice may not have been available, so if a recipe specified the juice of a citrus fruit it was assumed that you would produce this by squeezing an actual fruit.

Monkey Gland
50ml gin (Adnams Copper House)
37.5ml freshly squeezed OJ
Absinthe rinse (La Fée new formula)
½ tsp grenadine
Coat the shaker with a rinse of absinthe and drain. Add the other ingredients and shake with ice. Strain into a cocktail glass and squeeze a strip of orange peel over the top.

As mentioned, the gin/orange balance is important, so neither swamps the other, a balance of sweetness, fruitiness and spirit warmth. When it’s right, interesting chocolate flavours emerge. Maybe it’s the use of freshly squeezed OJ, but the spirit and juice seem to integrate in a way that suggests the rich orange character of curaçao. I also tried varying the gin brand, using Anno instead, and it still works, though I found that the approachable, fruity, floral character of Adnams Copper House sat more comfortably. I didn’t try varying the absinthe brand, but as long as it is real absinthe (avoid anything that is a bluish green, which is artificial; naturally coloured absinthe tends to be an olive green) I would imagine it’ll be OK in these proportions.**

Grenadine is traditionally a pomegranate syrup, and I have previously railed against modern commercial grenadines, which are actually based on “red berries”, and probably don’t even feature any real ones of those anyway. But it is easy to make a good one, not too sweet, with some of the tannic dryness of the fruit, by mixing equal parts by volume of 100% pomegranate juice (POM Wonderful is the brand I have used in the past) and granulated sugar, heated in a pan to dissolve, then cooled. I keep some in the fridge and it never seems to go off.

*Most of the recipes specify “Booth’s gin”, and more than once the text refers to the “mellow” or “matured” character—DBS tells me that Booth’s was actually rested in wood barrels (casks previously used for sherry or Burgundy, depending on the era) for 6–12 weeks to soften its rough edges. Some of the recipes, on the other hand, specify “Booth’s dry gin”; certainly by the mid-20th century Booth’s were selling their High and Dry Gin, claiming to be “the driest gin in the world”, though I’m not sure if, at the time this booklet was published, they were selling both versions. Sadly there is nothing actually about the product within its pages. Aged gin has become fashionable again (and in fairness Seagram’s have always rested their gin in wood for 3–4 weeks). In recent years a Booth’s Cask Mellowed Gin has been produced again.

** I see that the International Bartenders Association gives their prescribed recipe as even leaner: 50ml gin, 30ml OJ and just two drops each of grenadine and absinthe.

Posted by Clayton Hartley at 13:27 No comments: