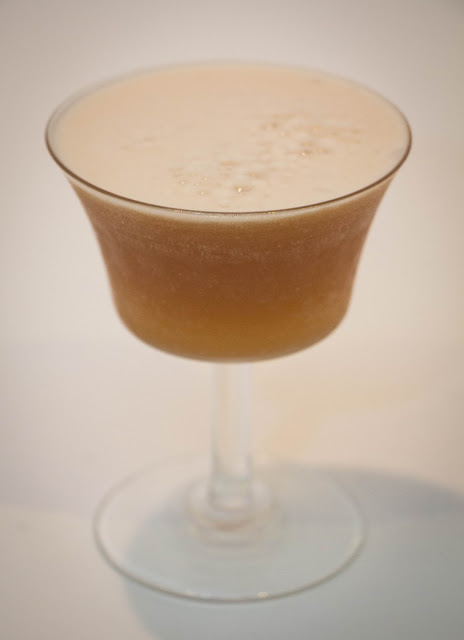 I have a few friends who belong to the East India Club, a private members’ club in London with a long history. Originally set up for employees of the East India Company and officers in the Army and Navy, who might need a base in London while away from their far-flung posts, in the 1930s it absorbed the Sports Club, and then in the 1970s (a tough time for many clubs, when membership of such establishments was at its least fashionable) the Public Schools Club and the Devonshire Club as well. Today there aren’t any real criteria for joining but I think the people I know who belong joined because their schools had been among those originally part of the Public Schools Club. There is no particular connection with East India, but I was interested to hear a couple of references to an “East India Club Cocktail” served at the bar.

In fact it turned out to be simply an “East India Cocktail”, and this is something with quite a history, though there are several approaches to it. It can be traced back to the second half of the 19th century when it seems to have been enjoyed by Englishmen out in the colonies. Though the East India Club would have been in existence by this time (founded in the mid-19th century), it is more likely that the cocktail was devised in one of the “American Bars” in fashionable Grand Hotels of the region.* Recipes vary but it always seems to be Cognac based.

The earliest reference is in Harry Johnson’s New and Improved Bartender’s Manual from 1882, where a double measure of Cognac is augmented by small amounts of curaçao, maraschino, bitters and pineapple syrup. You might think that the use of pineapple syrup rather than juice is simply a necessary expedient the further you get from the source of pineapples, but O.H. Byron’s The Modern Bartender’s Guide (1884) has a recipe that is essentially the same as Johnson’s except that it uses raspberry syrup instead of pineapple. This may well have evolved from Johnson’s version, but it does show that both pineapple and raspberry versions have been around for a long while.

The use of pineapple syrup certainly persisted into the Golden Age of Cocktails, as Robert Vermeire and Harry MacElhone, writing in the 1920s, specify it. But the Savoy Cocktail Book from 1930 gives the ingredients as brandy, curaçao, bitters and pineapple juice. as does Cocktails by Jimmy of Ciro’s (1930) and the Café Royal Cocktail Book (1937, an attempt to codify “correct” recipes by the United Kingdom Bartenders Guild). Perhaps the juice had just become more widely available by this stage, though a couple of sources from this time, and also David Embury writing in the 1940s, suggest that maraschino can be use instead of the pineapple juice, which would suggest it is just there to add a bit of fruity sweetness.

In fact the use of pineapple juice in cocktails does not just add the flavour of pineapples but, when vigorously shaken, adds a rich, silky, foamy texture. However, for me this cocktail is primarily about the combination of Cognac and pineapple flavours, which I think go very handsomely together indeed. Simon Difford’s version specifies Grand Marnier, a sophisticated curaçao made from a Cognac base, which seems a bit unnecessary to me, given that the cocktail is made out of Cognac anyway. And in fact I find that the orange flavour from the curaçao gets a bit lost too.** I would recommend just using Cointreau.

I rang the bar steward at the East India Club to ask how he made it. He does indeed specify Cognac, curaçao, bitters and pineapple juice, though he adds: “It’s very sweet. It’s good for the ladies.”

Actually I don’t think it is that sweet, but I do personally feel that it needs some balancing tartness, and one or two teaspoons of lemon or lime juice seem to do the trick, though it will depend on how sweet or sour you like things.

* Though Simon Difford says that the juice version is “thought to originate with Frank Meier at the Ritz Bar, Paris”, which would make it much later, as Frank served at the Ritz from 1921 to 1947.

** Actually Difford gives this recipe as “East India No.2”. His “No.1”, which he says is based on Ted Haigh’s version, which in turn is based on Johnson’s, uses syrup instead of juice, but in fact Haigh goes down the raspberry syrup route, adding maraschino as well, and Difford goes one further in replacing the raspberry syrup with grenadine.
Posted by Clayton Hartley at 06:43 No comments: