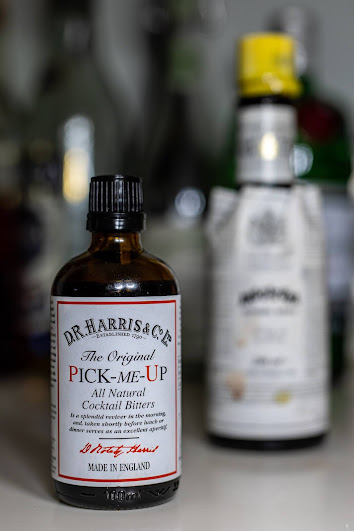 D.R. Harris is an ancient pharmacy in St James’s, the heart of London’s “Clubland” (that’s “club” in the sense of gentleman’s club full of leather armchairs, not in the Ibiza sense of the word). It’s been there since 1790. Not the bright strip-lights and melamine shelves of Boots or Superdrug, but rather a carpeted gloomth and mahogany shelving displaying tastefully modest quantities of their soaps, fragrances, shaving products—I’m sure the discreetly scarce volume of product on display is somehow designed to create a sense of scarcity that will justify the high prices. There is even an elegant pedestal wash basin in one corner: I’m not sure if this is so you can actually try stuff out, or whether it’s designed to show you how great their products will look in your bathroom.

Back in the 19th century the shop was famed for it’s “pick-me-up” tonic, available either as a ready-to-drink draught over the counter for those with an immediate need, or in concentrated form for home use. As might be appropriate in Clubland, it was much prized as a hangover cure. It was on sale from the 1860s but at some point in the early 2000s they discontinued it; there is a suggestion that it didn’t really taste very nice, though the main ingredients were cardamom, clove and gentian which (aside from the bitterness of the gentian) don’t sound too bad.**

So I was intrigued to hear that they have now brought it back in the form of a cocktail bitters, reimagined with the help of Bob Petrie from Bob’s Bitters. Interestingly, the blurb on the website still looks at the concoction as a restorative, listing the beneficial effects of the ingredients on the digestion, liver, mood, etc, but at the same time offers cocktail recipes. I guess it saves time if you can take your hangover cure at the same time as the drink that gives you the hangover in the first place.

Although there have been many bitters entering the market in recent years, I decided to do my analysis alongside Angostura bitters, without doubt the most well known, and probably the only bitters that most people in the UK have heard of—here even Peychaud’s is not known outside the realm of the enthusiast.

Open the cap and sniff the Angostura bottle and you get a powerful smell, an earthy base with bitter menthol or mint top notes. For me there is a strong element of cinnamon or cassia, with clove and a bit of chocolate too. Taste it neat and again there is heavy cinnamon, with bright, brittle mentholic fumes rising up. They don’t give much away about what is in it, other than gentian plus various vegetable extracts.

The Harris bitters has an immediately similar nose (but then gentian and clove are key ingredients), but at the same time fruitier and less woody. I get lime—in fact this is not given as an ingredient though there is lemon peel and bergamot. Pour some out and you’re immediately struck by the pale, straw-like colour compared to the dark red-brown of Angostura. Tasted neat it again shows less of the woodiness of cinnamon but it does have a fruitiness like jam or marmalade. I would say that the two bitters clearly have similar building blocks, with woody, earthy base notes and bitter, aromatic top notes, but the Harris offering does seem more sophisticated; you find yourself probing its complexity as tendrils of vanilla, chocolate and even chilli emerge (the fiery hint may come from ginger).

Compared to the Harris, the Angostura does seem rather crude now. But of course neither of these concoctions is intended to be consumed neat. The original Harris pick-me-up was simply added to water, so I tried adding five good dashes to a shot of water. The Angostura retained its essential character strongly at this dilution—cloves, cinnamon and gentian bitterness. The Harris was again lighter and more complex. I’m convinced you can smell the honey, but on the tongue I’d say it was actually less sweet than the Angostura. (Note that the Angostura bottle releases liquid much more readily that the Harris bottle, so it is hard to be scientifically precise about the quantities involved.) Overall the Harris is lighter, brighter and with a more pronounced high bitter finish.

Next I tried a Pink Gin, the classic bitters-forward blend of just gin and bitters, usually with water. This was a favourite of my father-in-law, who took it unchilled, which I believe is traditional. I blended 15ml gin with 10ml water and three dashes of bitters. In these proportions the Angostura bitters certainly make their presence felt and do sit well with the botanicals of the gin (I was using Tanqueray, which famously employs just four, juniper, coriander, angelica and liquorice). With the Harris bitters, of course, your Pink Gin isn’t pink. It also has a subtler nose with honey and ginger coming up. On the tongue I would say it was actually more harmonious with the gin than Angostura, but again with a more bitter finish. Intriguingly, it also seemed to evolve and “open up” in the glass, becoming more characterful as time goes by.

Finally, I try a Manhattan, mixing 15ml of Bulleit bourbon with 5ml of Belsazar Red vermouth and a good dash of bitters. Even in this reduced quantity compared to the previous test, and against some powerfully flavoured other ingredients, there is a difference between the two bitters: the Angostura makes for a heavier, jammier cocktail, while the Harris bitters made a lighter, more approachable drink, with a pronounced bright bitterness. It does come across as more sophisticated, less heavy and somehow more thoughtful—if that is something you look for in a cocktail.

So overall I am impressed. The Harris bitters are not cheap: 100ml is £20, though you can buy a 10ml taster for £6.50. But by comparison Angostura is £10 for 200ml, so a quarter of the price. (Angostura is more alcoholic too—44.7% compared to Harris’s 34%—but in the quantities in which it is consumed this is not really relevant.) But certainly the Harris Pick-Me-Up bitters are worth it, given that 100ml will last you a while. A note of warning, however: you had better like bitter flavours. I gave both versions with gin to Mrs H. to taste and she made that scrunched-up “this tastes like poison!” face that even hoppy ale produces in her. But if you are at ease with bitterness you will also find much more to this complex blend.

D.R. Harris’s Pick-Me-Up bitters can be ordered from the company’s website or if you have access to the capital you can saunter into their shop and buy it over the counter.

** Elsewhere I’ve seen a suggestion that it was only in the early 2000s that they realised they would need an alcohol licence to sell it, which they clearly had never had, though I guess they must have an off-licence now.

Posted by Clayton Hartley at 15:52 No comments: