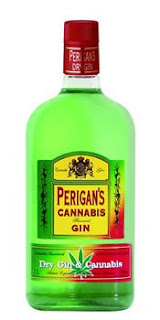 Made by Beveland Distillers of Spain, the label makes no bones about what it contains, with the word "cannabis" featured at least four times on the front label, not to mention what appears to be a cannabis leaf dominating the front.
Sharp-eyed readers will note the attempt to add a touch of regality to the product by adding a coat of arms (possibly from clip art), and the border of juniper berries (no doubt to help to remind you that,"Yes, this really is meant to be a gin.").
A quick scout around online shows that Beveland have also made a Cannabis Vodka, a Cannabis Absinthe and a non-cannabis Perigan's Gin.
So is hemp one of the botanicals? No (I'm not sure how well it would work, actually). The gin is cannabis flavoured and I imagine the fluorescent mouthwash-green colour is also introduced during the flavouring process.
The Taste
Neat: The nose is overwhelmingly one of cinnamon. In terms of taste, cinnamon is again at the foreground, with a little juniper at the end. This is not a juniper-led gin.
Gin & Tonic: What's this, another taste of Christmas? Truly, this is the first Gin & Tonic that I have had that tastes of cinnamon. Beyond this, there was a little citrus. (Mrs. B seemed to quite like it though!) A poor example of a G&T, but not a bad drink.
Martini: The drink keeps Perigan's trademark spearmint green colour, but its trademark flavour (no, not cannabis; cinnamon) remains. A very flat Martini. 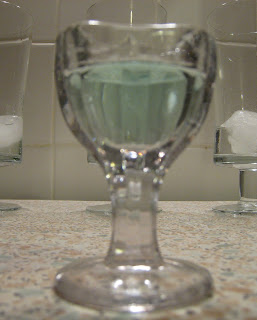 All-in-all, it seems:
(A) Perigan's doesn't taste of cannabis, and
(B) it doesn't make very good drinks. But, really, what did I expect?
Perigan's Cannabis Flavoured Gin is bottled at 37.5% ABV and Beveland stress that their product was marketed in accordance with the law. However, The Portland Group (a responsible drinking watchdog) investigated the brand after receiving a complaint from a publican in Bristol stating:
"This product is surely in clear breach of the code with, I feel, irresponsible and obvious illegal drug references"
The complaint was upheld and the importers (Ultimate Brands) decided to stop importing the product. I emphasise, though, that the contents of the gin was not in breech of the law.
As a result, it looks like it may be rather difficult to get your hands on some of this in the UK these days. The remainder of mine has been entrusted to the vaults of Plymouth Gin, where it now rests on their Gin Wall.
Posted by David Bridgman-Smith at 01:11