Hansard, the ghost of a gin 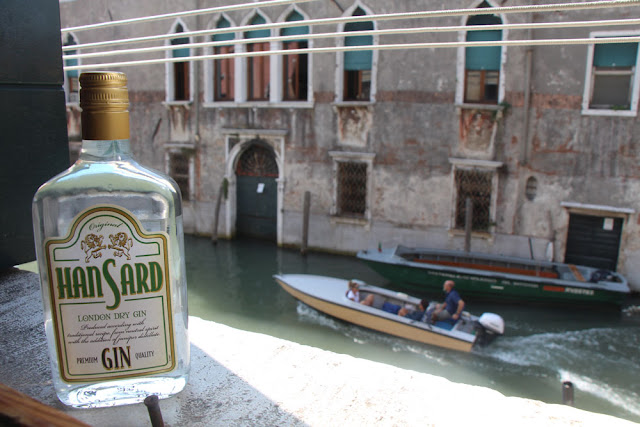 I was on holiday in Venice last month, staying in a self-catering apartment. On the first night we sloped into a supermarket for supplies and I was intrigued to see that the only gin they sold apart from Gordon’s was this, something called Hansard.

Such is the perceived “Britishness” of gin in many parts of the world (probably more those that don’t have so much of an indigenous gin habit) that the name didn’t really surprise me. (For those who don’t know, Hansard is the journal of record in the UK parliament.) Let’s not forget the name and label of Castle Bridge gin from Ghana. It is clearly labelled as “London Dry Gin”, but the front label also adds: “Produced according with traditional recipe [sic], from neutral spirit with the addition of juniper distillate.”

This is at once disarmingly frank and intriguing. So it has just the one botanical? It would be perfectly legitimate to make a multi-shot distillation with just juniper, then add more neutral spirit to dilute the botanical intensity, plus water to get the ABV down, and still justifiably call it a London Dry Gin. And, let’s face it, this stuff is €4.99 for a 70cl bottle, so they are clearly sparing a lot of expense in the manufacture.

The Italians may not be great gin drinkers but this is, after all, the nation that created the Negroni, and local bars are full of the usual international brands, such as Bombay Sapphire and Tanqueray, as well as more exotic marques that I recognise from home. So who is Hansard aimed at? It is made on an industrial estate in Finale Emilia, Modena, by Casoni Fabbricazione Liquori S.P.A., a family firm dating back to 1814, who produce a range of spirits, liqueurs and amari. Why is the front label in English?* It could be aimed at tourists, but I suspect it is simply to give it an impression of being an import from Britain (in a market where most products actually are).

I can’t find out anything online about the brand, and the ingredients are simply given as “water, alcohol and gin distillate”. I can certainly believe that it has just one botanical, as juniper notes rise up, along with a distinct note of caraway and anise sweetness (which I could believe is an element of the juniper character), and maybe a hint of sweet orange? It is smooth enough on the tongue but dry, with an element of sugar flavour, but not sweetness. Overall it does not seem terribly strongly flavoured at all.**

It makes an unexciting G&T, adding dryness and bitterness to the tonic but not much else apart from subdued caraway. In a Martini with Noilly Prat you mostly get the vermouth; as with the tonic, if you add more gin to get a balance, it just drags down the taste of the other ingredient.

Perhaps appropriately, the best use I’ve found is in a Negroni—up against the powerful flavours of the Campari and red vermouth it serves the useful role of adding strength (though note that it is only 38% ABV), damping the sweetness and injecting a bit of juniper/caraway steel. But of course there are plenty of gins that do a better job, and if you keep adding more gin to see what happens eventually it starts to fall flat again. I also start to notice that dry sugar taste coming through, perhaps from the base spirit.

I’m not much impressed by Hansard. Although it is not rough as such, I find it rather unbalanced and, despite possibly having just one botanical, not much like gin.


*And why does no one doing this ever get an English speaker to proofread the label?

** When I initially opened the bottle I got juniper and anise/caraway. I then poured a hefty slug into a glass and covered it with clingfilm before giving the bottle to DBS. These notes are mostly made later from the sample in the glass, so it is possible that the flavour has lessened. I certainly get more caraway now than juniper but it is not strongly flavoured of anything.
Posted by Clayton Hartley at 11:32 1 comment: