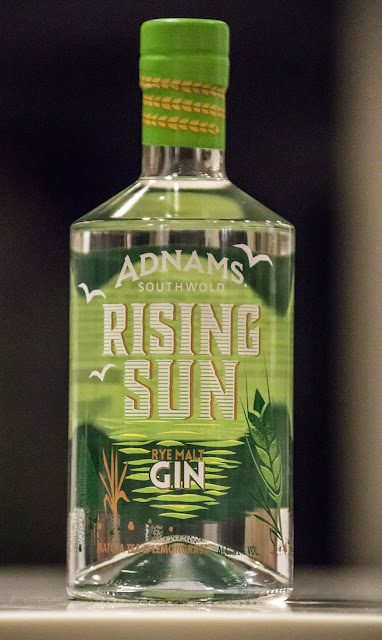 Back in 2011, when Suffolk brewery Adnams entered the distilling game with two gins and three vodkas, I was much taken with all of them. The basic Copper House gin, which is cheaper and more widely available, is based on Adnams’ entry-level barley vodka and features hibiscus in the botanicals, giving it a smooth, floral character; the more expensive First Rate gin is based on the more complex three-grain Longshore vodka and has a drier, more juniper-forward character.

Adnams is based in the seaside town of Southwold, with their brewery and distillery a stone’s throw from the seafront. I was in the town last week and found myself in their dedicated store (in fact they have two). Their range has expanded further, with a young single malt whisky, a triple-malt (wheat, barley and oats) blended whisky with a bourbon character, their Spirit of Broadside, distilled from their Broadside ale, an apple brandy, a triple sec, a limoncello, a rye vodka and also a third gin—Rising Sun.

The defining characteristics of Rising Sun are the use of two key botanicals—lemongrass and Japanese matcha tea—and the base spirit made from rye. (In fact the name apparently comes from the fact that the rising sun’s rays hit Jonathan Adnams’ field where the rye grows before any other. They don't say whether this spirit is the rye vodka that is now sold as a product in itself.) It seems to be quite divisive: a friend of mine who had already tried it was quite sure that he did not like it, saying that it was too savoury for him; and the woman in the smaller of the two Adnams shops declared that it was sharp and peppery, thanks to the use of grains of paradise, and she said it in a way that made it clear she wasn’t that keen herself.

In uncork the bottle and Rising Sun greets me with a reassuring waft of juniper,  some sweet orange peel and something floral like violets; concentrate the fumes and this becomes slightly overripe. There is a distinct sweetness, a hint of ginger and something biscuity, perhaps with a sharpness like varnish fumes, which may come from the rye base.

On the palate I’m half expecting a pronounced rye-whisky sharpness, but it is actually quite smooth. In fact it is complex, as if the spirit base is lean and dry but the botanicals are smoothing things out. For me the most striking element is the matcha tea which is quite noticeable (more so, for me, than in Beefeater 24, which prominently includes Japanese sencha and Chinese green teas among the botanicals). Not so sure I’m getting the lemongrass, but overall it is comfortably within the territory of modern smooth/sweet/floral crowd-pleasers. I’m not really seeing why it would wrinkle noses in the way that it has done. In fact to me it seems to have a faint aftertaste that is sugary like a boiled sweet (without actually being sweet as such).

I make a Dry Martini using Rising Sun and Belsazar Dry vermouth and the character persists, except that there is now a toffee-mint note emerging.

I try mixing the gin with Franklin’s tonic water and it brings a fruitiness—a concentrated kind of fruit like dates or dried figs, plus a note of chocolate. (Although I am quite new to Franklin’s, these flavours don’t come from the tonic itself—I checked.) And still the matcha tea note cuts through.

So far I like this gin. To me the green tea element makes perfect sense, but others may feel differently. It does not seem sharp to me as it did to the woman in the shop, but perhaps it is the rye that puts some people off: in the user comments on Adnams’ website one reviewer describes it as “propanone and sourdough starter gone bad”, which definitely sounds like a reaction to the spirit. (I suspect his “propanone” is what I refer to as reminding me of varnish.)

And I wouldn’t really call it savoury. But then I myself tend to prefer gins that are savoury in the sense of being herbal, so perhaps it just seems normal to me.

Comparing Rising Sun alongside Copper House, the latter seems cloyingly floral and fruity; I much prefer Rising Sun. But certainly I feel there is a house style to Adnams’ gins that is quite bold, citrusy, smooth and floral. (I have the remains of a bottle of Beefeater 24 for comparison and it is quite different, restrained with a stern, lean mouthfeel.)

I notice that on the webpage for Copper House gin they say that they first had the idea of using hibiscus when they encountered it in tea, so you get a sense of the overarching family of flavours that make up the Adnams approach to gin.
Posted by Clayton Hartley at 10:55 2 comments: