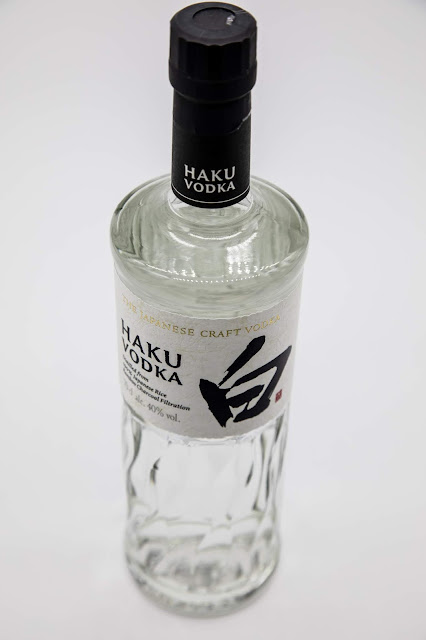 Given my enthusiasm for Roku gin, you won’t be surprised to hear that when I saw this in the supermarket I was keen to give it a try. Likewise made by Suntory, it is a self-consciously Japanese vodka (I’d be curious to know if both products are purely for the export market). Where Roku expressed its Japaneseness through its botanicals (two types of tea, leaves and flowers of the sakura cherry tree, yuzu peel and sansho peppers) you can’t really do this with vodka. So they made it out of rice (check) and filtered it through bamboo charcoal (check).

Does bamboo charcoal impart any particular flavour or is it just a gimmick? Who can say? The website suggests that this is the source of a soft sweetness in the product. And in fairness to Suntory, creating a vodka can’t really be considered bandwagon-jumping—the first Suntory vodka was Hermes, created back in 1956.

The nose is immediately fruity, suggesting watermelon but also something a bit like varnished wood. It does remind me of sake, that slightly sour note, and also lime and orange, then a hint of blackcurrant and maybe violets. Then sometimes flour.

That nose is quite something to live up to and perhaps the palate can’t manage to be quite so effusive, but many of the elements carry over. It is definitely more polished and less medicinal than many vodkas, and sweet on the tongue. I tried it from the freezer and this is a mistake—you simply lose many of the subtleties, leaving a sour harshness on the tongue. That flat/sour character again reminds me of sake and I guess is because this vodka was made from rice, but at room temperature there is no harshness at all. Dig deeper and again you get fruit—orange, watermelon and starfruit. (Yes, whatever anyone says, starfruit does have a flavour. When I was a student you could buy star fruit in the supermarket and they were popular sliced into fruit salads because the slices were star-shaped, and more than once I have heard the opinion that this was their sole appeal. But I have always maintained that they do have a distinct flavour, somewhat waxy and sour. Anyway, I haven’t seen them for sale in years.) The finish is smooth with a hint of that cellulose character that vodka often has for me.

I like Haku but, as with Roku, I feel its qualities are best appreciate neat, either at room temperature (which many might feel odd about with a white spirit) or perhaps with some pure ice. Chill it heavily and you lose it subtle complexities. Blended with mixers or in a cocktail it’s generally a similar story. But I can’t help trying the one cocktail I can think of that contains both vodka and gin—the Vesper Martini. From Chapter Seven of the James Bond novel Casino Royale, the cocktail, when ordered by Bond, is described as: "Three measures of Gordon’s, one of vodka, half a measure of Kina Lillet. Shake it very well until it’s ice-cold, then add a large thin slice of lemon peel. Got it?" (At the time it doesn’t have a name, but Bond later decides to call it the Vesper after another character in the book.)

For scientific purposes I first try the blend unchilled and without the garnish. I have to say that I went into this cocktail from a gimmicky perspective, just to try making it with the two Suntory products; I’ve always thought the Vesper was an odd cocktail—what are you going to taste from the vodka when it is outnumbered three-to-one by the gin? And these are subtle products that seem to give their best when uncontaminated by other ingredients. And yet to my surprise this cocktail really works. You can still taste the gin, but there is smoothness and sweetness added which makes it now all too easy to drink. I also thought the lemon peel might steamroller over the nuances but it sits happily alongside the prominent citrus notes of the gin. How much of the smooth, plump mouthfeel can be attributed to the vodka, rather than just the Cocchi, which is sweet in itself? Hard to say, but I experiment with a 50:50 blend of Haku and Roku, with nothing else, and I would say it is more drinkable neat than Roku on its own, with the vodka smoothing and fattening the texture. I even try two parts vodka to one part gin and that is a worthwhile drink too, with the clear feel and flavour of the vodka now joined by the bright gin botanicals.

I once went to an open house at the Sipsmith distillery in which we did some tastings. I remember Jared Brown talking about the Vesper and saying that if gin is vodka with botanicals then the vodka in a Vesper is just a way to dial down the botanical intensity. That may be the case with a distillery which makes a vodka and a gin that is, indeed, the same vodka with gin botanicals. But in many cases it is not—for example the TOAD distillery makes both and treats their vodka to a filtration process that does not, as far as I am aware, come into the picture with gin. Likewise, the spirit in Haku is not the same as the base spirit in Roku (they don’t say it is, and it doesn’t feel or taste like it). Adding the Haku to Roku brings in the silky mouthfeel and slightly sour sake notes. Now, blending these spirits is not something that Suntory suggests, and indeed their recommended cocktails are pretty austere—Vodka Martini or Vodka and Tonic; and Martini, Negroni or Gimlet for the gin (the latter made with lime juice and syrup, in the style of Kazuo Uyeda’s signature drink, not in the classic way with lime cordial). So the Suntory blending masters would probably be horrified by this cocktail. But it is nevertheless Quite Interesting.

If you’re a vodka drinker, do try Haku. But not from the freezer.
Posted by Clayton Hartley at 17:33 1 comment: