Coke Signature Mixers: even better than the Real Thing 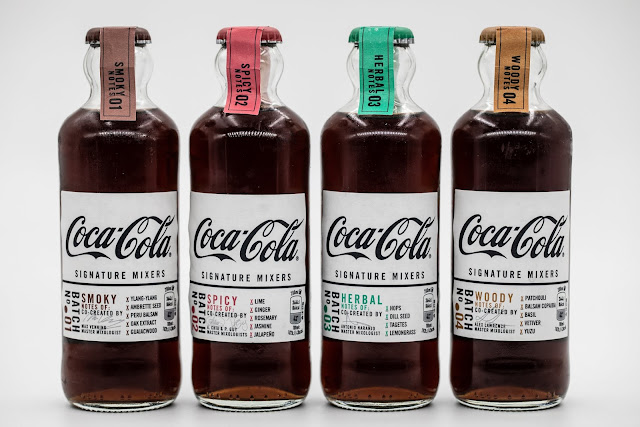 Trolling through the aisles in Sainsbury’s my eye was caught by these, and I remembered reading about the project. Coca-Cola have produced a range of four “Signature Mixers”, designed specifically to be mixed with dark spirits, created in association with mixologists. No.1 Smoky was created with Max Venning of Three Sheets in London. No.2 Spicy was created with Adriana Chia from La Antigua Compania de las India in Barcelona and Pippa Guy, head bartender of the American Bar in the Savoy. No.3 Herbal was created with Antonio Naranjo of Dr Stravinsky in Barcelona. No.4 Woody was created with Alex Lawrence of Dandelyan Bar in London. (Not sure why they are all from either London or Barcelona, but there you go.)

So I thought I’d give them a try. Having trooped out to buy all the recommended garnishes, I then got distracted for a few days before realising that these fresh ingredients weren’t going to last forever. Since the basil was looking a bit wilty, rather than going in numerical order, I started with…

With these drinks I was expecting subtle variations on the conventional Coke flavour, so I was surprised when this hit me on the nose with a pungent peppermint or spearmint thrust, with elements of fennel and dill. On the tongue there is more of the Coke taste, but still with a strong character of spearmint chews from the 1970s. (Mrs H. reminds me they were called Pacers. Gosh, that takes me back.) In fact there is no mint in it: it apparently has hops, dill seed, tagetes (a marigold native to Mexico) and lemongrass. 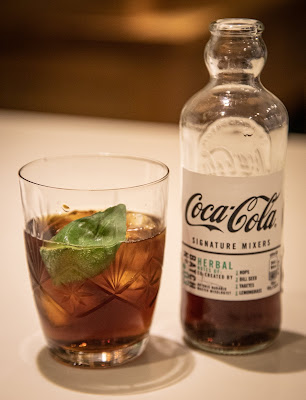 The prescription says to mix it with Cognac or Scotch and use a basil garnish. With Cognac it doesn’t quarrel but I don’t entirely get it. I can taste the two different things but they don’t seem to be on speaking terms. The basil leaf seems lost in all the spearmint woosh. Almost as an afterthought I try it with Scotch (Queen Margot 8-year-old, the multiple-award-winning juice from budget supermarket Lidl), and it goes surprisingly well. The malty rasp of the Scotch and the pungent herbs of the Coke make natural drinking buddies. Mrs H. isn’t so impressed, but in fact I actually find this combination rather exciting, as it’s not often I think that Scotch really works in mixed drinks.

This one smells more obviously like Coke, perhaps with a hint of chilli. It does have jalapeño, plus lime, ginger, rosemary and jasmine. If you focus you can pick up a floral hint from the jasmine. On the palate I’m struck by the sweetness. It tastes of classic Coke plus chilli and something like root beer. You can certainly find lime and ginger, though the latter does not seem prominent to me (but then the recommended garnish is root ginger, so you can dial it up that way). The recommended combinations are with golden tequila and Scotch. With the latter, I don’t really get it—it’s hard to strike a balance. I’m using Queen Margot 8-year-old again and apart from the smoke the rest of it gets a bit lost.

With tequila it’s a different kettle of fish. I would not normally think of mixing Coke and tequila, so I don’t immediately have anything to compare this to, but here the earthy agave notes mesh very neatly with the mixer. (I’m using Casamigos Anejo, as it’s the only aged tequila to hand.) Oddly at this point the chilli suddenly comes out, along with a note of orange, for some reason. This is a genuinely interesting combination, with new flavours continually emerging.

Again the nose is primarily Coke, but this time with a hint of sandalwood. The label says it has balsam and patchouli and on the palate I can agree those are there, but I don’t immediately get basil or yuzu, which are also listed. And as for what vetiver tastes like, I really don’t know what I’m looking for. However, after a while, once it’s opened up in the glass a bit, I do get basil—aromatic notes that seem to reinforce the resinousness of the wood, which is not how I would have thought of basil before.

The recommended pairings are with rum or bourbon. Rum and Coke is a fairly classic combo, but with Havana Club 7-year-old it’s a bit ho-hum. No exciting synergy, just dark sugar elements against the intrinsically sugary Coke backdrop. With bourbon, however, it is a different story. Bourbon and Coke, or at least Jack Daniels and Coke (and JD is actually a Tennessee Whiskey) is again a recognised Thing, but it’s not something I drink so again it is hard to say whether this Woody incarnation goes better than regular Coke. But when I mix it with Buffalo Trace there is an immediate harmony between the woodiness of the bourbon and that of the mixer. 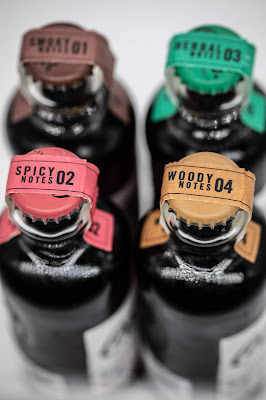 This one has ylang-ylang, ambrette seed, Peru balsam, oak extract and guaiacwood, whatever that is. And this time as soon as you lever off the cap and put your nose to the bottle neck you can tell it is not normal Coke. It is smoky, in a BBQ sauce kind of way, but there is also something heavy and floral—perhaps the ylang ylang. This is dominant on the palate too, sweetly floral but with a spicy mid-range to it, plus a balsamic weight on the tongue. I have to say that it reminds me of some sort of fragranced fabric softener or cleaning fluid. In fact it smells like the inside of a chest of drawers at an elderly aunt’s house, perhaps because the dense floral smell is combined with the woodiness.

With dark rum it goes OK, the dark sugar sitting quite happily with the sweet fragrance, though I would say the two elements tolerate each other rather than being greater than the sum of their parts. The other recommended mix is with bourbon. This is pretty successful, with the wood and caramel notes of the whiskey happily at ease with the wood and sweet aromas of the Coke. Oddly this combo brings out a note of orange which for me now comes to the fore. Interestingly the prescribed garnish is indeed orange peel, though when I try adding this I feel it is now too much.

I think both of these mixes work well enough, though I can’t really get excited by either of them. Perhaps I’m just put off by the cloying nature of the Coke itself. Even Mrs H. couldn’t finish the centimetre that I left in the bottle for her to try.

There is one question, however, that I still have to answer. As I say, I almost never drink Coke, either as a soft drink or a mixer, so I need to establish if these fancy Cokes actually go any better with spirits than the regular version. Sure bourbon and regular Coke is not a million miles away from the bespoke Woody version, but Mrs H. and I both agree that the latter is preferable, if only because there is more going on, more nuances and harmonies. Mrs H. feels the regular Coke has a bitter finish by comparison and it does seem to be a bit of a dead hand on the drink compared to the Signature version.

Tequila and Coke is definitely not something I would think to drink normally, but for the sake of scientific enquiry I compare normal Coke with the No.2 Spicy version. I’ve run out of the Casamigos Anejo so I have to make do with a blanco. Again the version with regular Coke is not vile, but the blend with the Signature is more interesting, and bearing in mind that all these mixer Cokes are specifically designed to go with aged spirits we can safely assume that with aged tequila the match would be even neater. 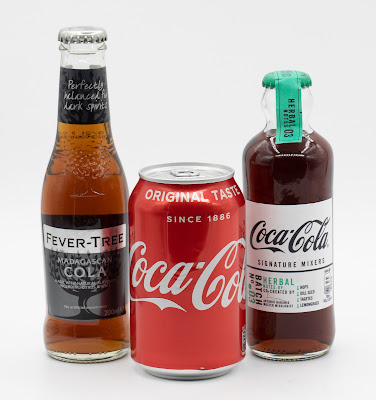 With Scotch and No.3 the difference was most pronounced, not least because the spearmint flavour of the Coke is so distinctive. In this case the regular Coke comes across with a flavour of burned sugar with a bitter aftertaste. Odd as this mixer is, I would definitely say it blends better with Scotch whisky.

The project has clearly been a success for the Coco-Cola Corporation, because I gather that the mixologists who worked on these four products are now helping the company find the next generation of bartenders to collaborate on a second series of mixers.

While we’re on the subject of Coke, I was also given a sample of Fever Tree’s Madagascan Cola. This too is specifically intended as a mixer for dark spirits, rather than to be drunk on its own. They describe it as having a “delicate sweetness”, and it does come across as sweet, an impression enhanced by the prevalence of vanilla in its profile. With bourbon, up against bourbon with regular Coke, the latter seems to have more of an edge, a more noticeable lime note, again with a slight bitterness to the finish; the Fever Tree’s vanilla blended more easily with the wood flavours of the whiskey, and Mrs H. preferred it, though I’m not sure whether I wouldn’t find it a bit cloying after a while. With Wood’s Old Navy Rum I felt that with regular Coke you were more immediately aware of the rum, perhaps because with Fever Tree the two drinks blended together more easily, but you can definitely taste the rum there too. I think that rum and Coke is a more effective combo than bourbon and Coke anyway, so I felt that here it was more a question of taste, the high vanilla presence in the Fever Tree pushing it more in the direction of spiced rum.

Posted by Clayton Hartley at 13:05 No comments: