On a recent brunch visit to J.D. Wetherspoons I was pleased to see two new varieties of Kopparberg Cider in this watering hole. For a long time Wetherspoons have had exclusive deals with the Swedish Cider company to be supplied with varieties and flavours of the cider that can only be sold in their pubs and bars. I know that at least the blackberry variety is and the pub periodical informs me that a Blueberry and Lime flavour is on the way.

Chilled
Nose: Blackberry with the faintest hint of lime
Taste: Some sweetness, sweet berry, quite creamy, medium-high fizz. OK, but not amazing.

With ice
Taste: Quite fresh and crisp; I still don't taste any lime but thirst-quenching and nice enough.

The plain blackberry Kopparberg was one of my favourite, this isn't a patch on that—the inclusion of lime seems rather pointless.

Chilled
Nose: rich jammy berries with raspberry and blackcurrant
Taste: some apple followed by Ribena cordial. Lots of berry and less fizzy than the Blackberry and lime, only a medium fizz. Quite similar to the kiddies cocktail of Ribena and Lemonade.

With ice
With ice and a bit of dilution the drink seems completely non-alcoholic and really just tastes like blackcurrant and lemonade. Very clean and exceptionally easy to drink. Rather tasty.

It is worth noting that this variety (like the Blackberry & Lime) is bottled at 4.5%ABV rather than the usual domestic 4.0%ABV.

This fact makes the smoothness and drinkability of this cider even more surprising. You could quaff a couple of bottles of this very easily and the effects could really creep up on you.
Posted by David Bridgman-Smith at 13:44 1 comment: 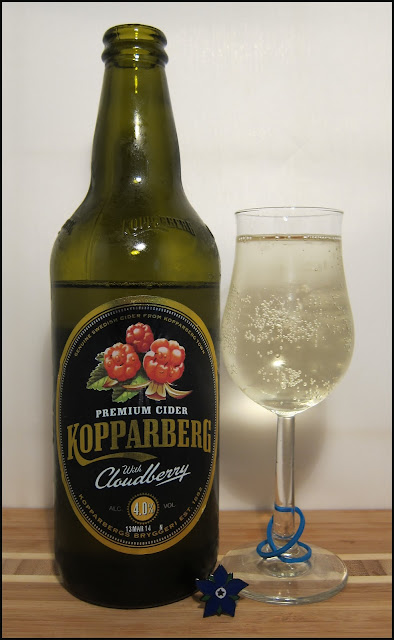 On a recent trip to Tesco, while on my usual stroll down the cider aisle on the lookout for something new to try, I came across Kopparberg Cloudberry, which is an apple cider with a hint of cloudberry.

Given the cosmopolitan and learned nature of our readers, I am sure that many will know what cloudberries are, but, typically, we don’t see these very often in the UK.

The cloudberry (Rubus chamaemorus) is popular in Scandinavian and Baltic countries, as well as Russia, and is commonly used to make jam in addition to flavouring spirits. They are also popular in Canada, where they tend to be used to flavour beer.

Nose: Jammy apple, with berries and a hint of spice.
Taste: Medium-high fizz with dry apple upfront, followed by fruity berry notes; these remind me a little of blackberry and a little of raspberry. As the cloudberry is quite a dry berry, this is less sweet than many of the other flavoured Kopparbergs.

With ice:
Not bad; this actually works quite well. Although the sweetness comes through a bit more, the drink has a touch more refreshment. On balance, I like this equally well with ice or just chilled.

I like some Kopparberg varieties better than others and I think that this is definitely one of the better ones. If you don’t like the mixed berry or mixed fruit varieties I’d suggest trying this one for a pleasant surprise.

Kopparberg Cloudberry is available for around £2.50 for 500ml from Tesco.
Posted by David Bridgman-Smith at 13:23 No comments: