Something to chew on from Greece 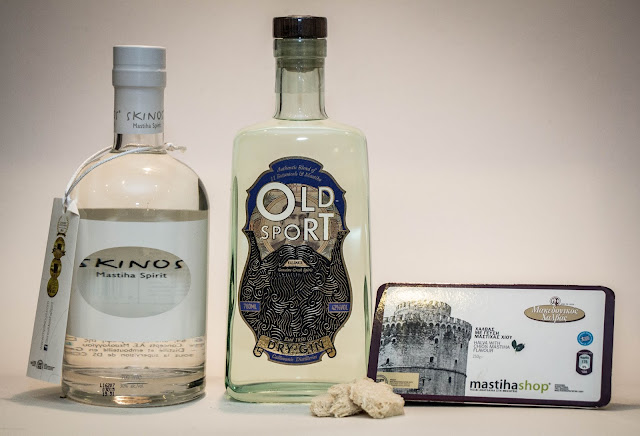 We were on holiday in Athens, prompted by the chance to visit a friend in the last weeks of his tenure as British ambassador to Greece (we even got to stay in the embassy for a few days—something that’s not likely to happen ever again), but he was a busy man and we were mostly left to our own devices. On the first night we were finishing dinner in a restaurant when the waitress glided by and placed two small liqueur glasses in front of us. “Μαστιχα,” she said, which I assumed meant something like, “On the house.” The liquid in the glasses was indeed a sort of liqueur, but earthy, and not like any I’d tried before.

Later we discovered that the waitress was actually identifying the liquid as mastiha, a liqueur made from a resin from a tree that grows on the island of Chios. In fact the gum is known in Greece as “tears of Chios” and it has been harvested there for over 2,500 years. Traditionally the mastiha gum is chewed to freshen the breath and because it was believed to aid digestion and dental health and prevent illness. Later, on a foodie walking tour, we got to try chewing some actual gum. In fact the name comes from the Greek word to chew, and is where we get “masticate” in English (and, presumably, “mastic”, the rubbery stuff builders use to seal joins). Making a liqueur out if it is a relatively recent refinement but still goes back a few hundred years.*

We quickly discovered that the Greekness of mastiha was self-consciously used in other products: in a wine shop I was intrigued to discover Old Sport, a Greek gin that included mastiha as a botanical. And at the airport we even came across some halva (a crumbly sweet delicacy made from sesame with a fibrous texture) with mastiha in it.

Let’s start with the gin. Who knows what is going on with the label: the stylised beard may be designed to appeal to hipsters, though the sculptural treatment suggests the beards of Gods and heroes in Greek marbles. But then, where the beard’s owner’s face should be, there is a photo of a bloke with a moustache that looks like it’s come off a cigar box or banknote. That bloke pops up on the website next to the line “165 years of distilling”, so he may be the distillery’s founder. There’s no clue on the site as to why it’s called Old Sport—a Great Gatsby reference?

So what’s it like? Opening the bottle and I get fresh orange or tangerine. When I pour it into a glass it shifts to a weird sour smell, like the inside of a plastic bottle that previously held orange juice but is now empty and has been left in the sun. Then a dark note emerges, a dry, woody smell, and, oddly, a sweet sesame note—like halva.

In the mouth there is a suggestion of liquorice, cumin seed, maybe fennel seed or caraway, but not really any juniper. The base spirit itself if a bit rough and leaves the tongue feeling slightly seared. Again there is an earthy, dry root element, like horseradish but without the heat.

According the back label the botanicals are juniper, angelica, rosemary, cardamom, cinnamon, nutmeg, orris, liquorice, coriander seed, lemon peel, bitter orange peel and mastiha. So, no cumin, but perhaps the nutmeg and cinnamon suggested it, in combination with the mastiha. Rosemary is an interesting one and I can get that. 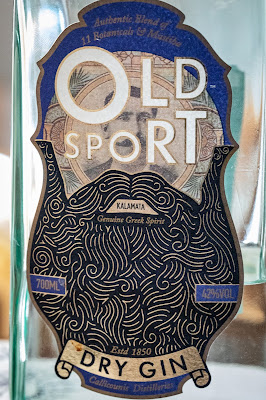 While it is not offensive, it is hard to like Old Sport. On paper the botanicals sound as if they should make a complex and punchy libation, but instead of being vivid and intriguing it seems lifeless and stale. Some gins fascinate as the flavours evolve and interplay but Old Sport just sits there like an experimental infusion you made years ago and forgot about. It’s dominated by a sour, waxy, mid-range woody note, with none of the bright, refreshing elements one rather looks for in a gin. The website describes it as “mildly complex”, which sounds like damning with faint praise, though I suspect they mean it is both mild and complex. In fact it is neither of these things.

The Skinos mastiha liqueur was bought at the recommendation of a man in a booze shop (Mr Vertigo in Filikis Eterias Square). I would say it was sweeter than the digestif we were served on that first night, but it nevertheless intrigues. Open the bottle and you’re hit by a powerful earthy smell—exactly that “horseradish without the heat” that I detected in Old Sport but much stronger. There are also hints of cucumber and chocolate.

Allow it to expand in a glass and the aroma becomes creamier, but with a high grassy note—a bright, sharp layer that actually reminds me of juniper (an element that seemed sadly lacking in Old Sport gin)—but then one would expect mastiha to be resinous. On the palate Skinos is arresting, serving up white chocolate and the sweet earthiness of halva.

That intriguing high note makes me wonder how this would blend with a classic juniper-led gin. I have some Christopher Wren gin from City of London Distillery within arm’s reach so I give it a try, roughly half and half. The gin does not have the warm sweet bottom end that many modern gins attempt, but the Skinos smoothes its sharp edges. It’s a toppy, crisp gin with juicy, leafy undertones and a peppery, dry mouthfeel. The mastiha obviously makes it sweeter and the earthy root flavours sit below the gin’s high notes. Moreover, I definitely think the blend of Skinos and Christopher Wren gin makes a pleasanter, better balanced and more complex drink than Old Sport, though with the added sugar it could not count as a gin in itself.

This got me wondering what would happen if you added lemon juice to balance the sweetness—it would be the classic combination of base spirit, sugar or liqueur and lemon or lime, that is the structure of so many well-known cocktails. Effectively it’s like making an Aviation but using mastiha instead of maraschino. I added lemon juice to the blend I’d already made and I can report that it works. Mrs H. found it a bit strong, but at this stage I hadn’t shaken it with ice which would have diluted it. (I added tonic and found that the flavours continued to present and balance in the same way.) Finesse the proportions and that’s a cocktail right there.

And what of the mastiha halva, I hear you ask? It tasted like halva.

* It seems the liqueur is properly known as Chios Mastiha. The term mastika is used in neighbouring regions to refer to an aniseed drink more akin to ouzo or raki.
Posted by Clayton Hartley at 07:25 No comments: