A cocktail for the Titanic 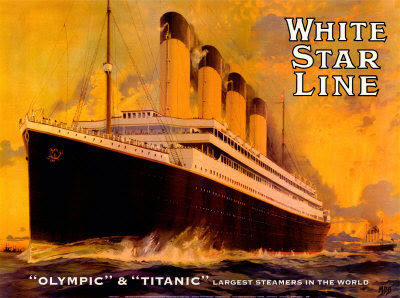 Tomorrow is the one hundredth anniversary of the tragic loss of RMS Titanic.* Given that we had a Candlelight Club event scheduled for 13th and 14th April it made sense to mark this in some way. Titanic was actually more Edwardian than 1920s, so we decided to celebrate that whole Golden Age of luxury cruising, before air travel came and spoiled all the fun.

The birth of the ocean liner coincided with a rush of emigration across the Atlantic: the mass of third-class custom financed the mighty ships, along with government subsidy driven by national pride—nation vied with nation to produce the largest, fastest and most spectacular vessels, with the “Blue Riband” emerging as an informal prize for the fastest crossing of the Atlantic. Early efforts were more about speed than comfort, but by the time of Titanic wealthy shipping magnates competed to fit out their ships with grand staircases and Louis XVI furnishings. Titanic featured such innovations as refrigerators and electric lifts plus running water in every cabin, not to mention three dining rooms, an à la carte restaurant and a Parisian café. Germany's Imperator even hired Georges Escoffier—perhaps the most famous chef in the world at the time—to run the galley.

But it was in the 1920s and 1930s that the opulence peaked. By now the US had curtailed immigration and ships were instead aimed at the wealthy, especially monied Americans fleeing Prohibition for some drink-soaked fun in Europe. The Normandie—considered by many to represent the peak of luxury cruising—offered a swimming pool, gym, shooting gallery, nightclub, shopping mall, Byzantine chapel, children's playroom complete with merry-go-round and a cinema showing films before general release. A passenger could have his own four-room apartment with dining room and servants' quarters, furnished with tapestries and a grand piano. Passengers could even accessorize with an Hermés clutch bag in the shape of the ship. For the rich and famous it was the only way to travel and the piers around were lined with autograph hunters.

Although we have surviving food menu cards from the Titanic, and know exactly what was eaten in each of the dining rooms and restaurants on her last night, there don’t seem to be any extant cocktail menus. However, a 1911 cocktail list from the sister ship Olympic apparently lists the Manhattan, the Tom Collins and the John Collins, fairly standard drinks for the time.

There is actually a cocktail called the Titanic—gin, dry vermouth, Galliano and blue curaçao. I can’t find out anything about its history but I would assume it is modern (it’s a sort of blue-green colour, appropriately), even though blue curaçao was around at the beginning of the 20th century and Galliano was invented in 1896. There is another drink called the Titanic Uplift (Midori, gin, orange juice and lime), about which again I can find out nothing, but it also has the distinction of being a peculiar colour and must be pretty modern (Midori only dates from 1978).

In the end we did include a few modern recipes just for aptness—such as the briny Salty Dog (gin and grapefruit juice with a salt rim, here augmented by maraschino and peach bitters) which dates from the 1960s, and even the cheesy Sea Breeze (vodka, grapefruit juice and cranberry juice), but there are three others I will concentrate on.

There is indeed an Olympic Cocktail, which apparently originated from Ciro’s of London in 1922 (it is certainly there in my 1930 reprint of the Ciro cocktail book), and it is reasonable to suppose it may have been named after the ship, which was in service from 1911 till 1933. As Ted Haigh points out, it is a close relative of the Sidecar, replacing the lemon juice with orange and the triple sec with curaçao, while retaining the equal proportions.

It’s certainly orangey as you might expect. I followed Ted’s suggestion of adding some bitters to give it an edge. (The distinction between curaçao and triple sec is moot and has evolved over time, though it might be helpful to think of the former as brandy-based, sweeter and coloured, and the latter as clear, drier and neutral-spirit-based; but the distinction is not that helpful given that different brands will taste different anyway, as Jay Hepburn discovered when he compared 23 different orange liqueurs. Like everyone else we just used Cointreau.)

I was thumbing through the Savoy Cocktail Book when by happy accident I noticed that, about one cocktail, Harry Craddock (who seldom comments on the drinks at all) observed, “A favourite at the bar of the S.S. Mauretania”. What better endorsement could I get? The cocktail in question is the Webster:

I have to say that this is probably my favourite cocktail out of all the half dozen that we are offering this time. In some ways it starts off as a Martini, but with quite a high proportion of vermouth,** then adds a half-and-half sweet and sour mix of liqueur and citrus, but overall it’s one of those sublime drinks where you can taste everything and it all works together. Like most classic cocktails it is not particularly sweet but Mrs H. and I found it dangerously moreish. Those long days at sea must just have flown by. (Some of the fittings of the Mauretania’s bar ended up in a drinking den in Bristol of the same name, though apparently now renamed Java. If true, these pictures should give you an idea of what it was like:. The cocktail bar, or at least a bar of some sort, from the Olympic has ended up in the Lambton Hounds Inn, in Pity Me near Durham, though the effect is perhaps less grand.)

One of the effects of the surge in cross-Atlantic travel by the well-heeled was the rise in popularity and fashionability of the Normandy port of Deauville, on a stretch of coast which become known as the “Parisian Riviera”. In honour of this I adapted the various recipes you find for Calvados coolers, such as the Harvard Cooler, to include that French classic the blackcurrant liqueur crème de cassis, poured over the top—like the grenadine in a Tequila Sunrise it sinks straight to the bottom then slowly blends upwards like the sun rising.

Whatever your tipple, raise a glass to the 1,500 souls who lost their lives in the frigid Atlantic waters a century ago.

* Actually I think it struck the iceberg on the 14th but finally sank on the 15th.
** Many drinkers are hooked on the legends of über-dry Martinis from the Golden Age, but I actually think that if you are going to make a cocktail, rather than just drink gin, then why not allow the vermouth to make its presence felt? For the record, my current favoured ratio is about four parts gin to one part vermouth.

Posted by Clayton Hartley at 04:04 No comments: