A Pash-ion For Vodka #4 - Precious Vodka

Last Wednesday, Mr Hartley and I put down our test tubes, switched off the Van-de-Graaf and headed to the docklands on a field trip; our destination: Distil 2011. We tried a variety of interesting potions and draughts during our visit and we especially enjoyed a wine and chocolate tasting with Bava (the folks behind Cocchi Americano).

But one of the most eye-catching products that we tried would have to be Precious Vodka. 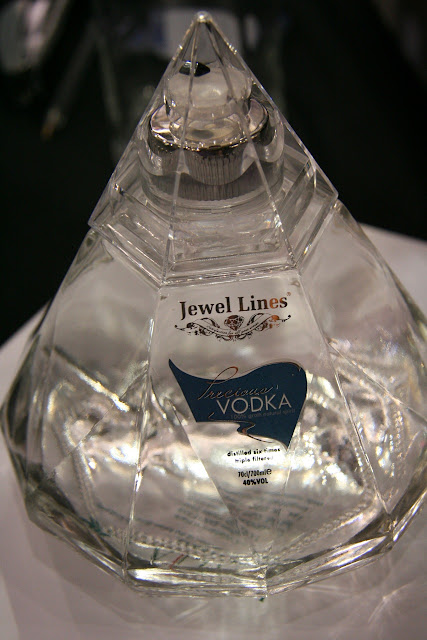 Precious Vodka is a grain-based vodka, distilled six times and charcoal filtered three times. What is immediately noticeable about the vodka is the rather unique bottle: it is shaped like a deep Brilliant-cut (Pre-Tolkowsky) Diamond and at the top is a small compartment which contains a gemstone. There five different types of gemstone available:


So after the background, let's look at the taste:

Neat (Room Temperature)
Quite alcoholic on the nose, the taste is much more impressive: sweet and smooth, with a touch of honey-like viscosity and maybe even a little bit of honeyed sweetness. Quite short on the finish, but when you can taste the vodka it provides a full sensation in terms of taste and texture.

Frozen
Very, very clean, with only the faintest hint of burn and very light, sweet grain at the end.

Martini (Shaken)
I like it; very clean and very crisp. Perfect when served with an olive or a twist of lemon. For me, the olive was my preference. A very classic vodka Martini.

Posted by David Bridgman-Smith at 05:54 No comments: 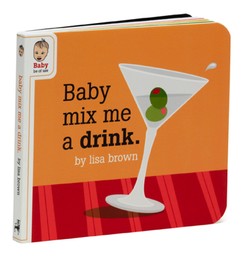 No, it’s never too early to train your flesh and blood in good bar-husbandry. This easy-wipe book will tutor your scion in fixing some classic snifters. “Tots will be entranced by the shapes and colours, all the while learning how to mix a variety of basic cocktails,” the publishers say. “Whether it’s an Old Fashioned for Grandpa or a Champagne Cocktail for Nanny, this twelve-page vibrantly coloured instructional board book is captivating for parents and babies alike.” Part of an educational series that includes Baby Fix My Car, Baby Plan My Wedding, Baby Do My Banking and, erm, Baby Get Me Some Lovin’. Nothing about sweeping chimneys, oddly. 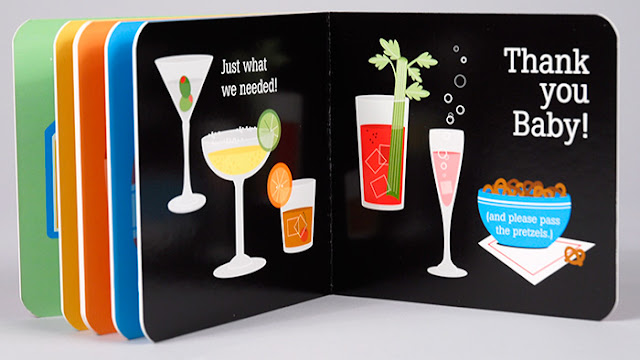 Email ThisBlogThis!Share to TwitterShare to FacebookShare to Pinterest
Labels: Baby mix me a drink

For the first Pash-ion for vodka, I looked at Chase Smoked Vodka, and today we'll look at Chase Marmalade Vodka. This was first released around the same time as the Smoked, but due to its great popularity it is to be re-released in some funky new packaging.

The vodka is bottled at 40%ABV and is made by marinading marmalade with their English Potato Vodka in the belly of their still; this is then boiled and infused in a Carter Headstyle still with fresh Seville Orange.

Own
Sweet citrus on the nose, like Triple Sec or country marmalade. Packed with flavour, there is a touch of vanilla that reminds me of ice-cream. This straw-yellow liquid has a slight warming effect and a moderate bitterness from the orange peel. It's rather complex and is dry rather than sweet. It has a certain smoothness, but has a touch more burn then some of their other products.

Frozen
A lovely texture, as the cold of the ice box has made the vodka a little more viscous, like a thin syrup. At this temperature some floral or perfume elements come to surface. The vodka is characterised by the preserve's sweetness and the bitterness of the peel (in the same way that marmalade is), but, when served at a low temperature, these two flavours seem to separate. This doesn't detract from the drinking experience, however, and this is still a well-rounded tipple. 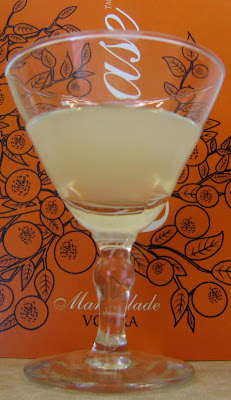 Martini
6:1 Martini Extra Dry - Shaken
With a nose of freshly zested orange, the drink is smooth, yet crisp, and has an initial flavour of sweet citrus, a bit like Cointreau. It has just the right balance between sweet and bitter and has a long finish. Pleasant and delicious; if only you could spread it on toast!

In Conclusion
It was great to get a chance to try the new batch of Chase Marmalade Vodka and I wasn't disappointed. This is great to drink on its own or to experiment with in some summery cocktails. A Harvey Wallbanger variation: 2 parts Marmalade Vodka, 1 part Galliano, 3 parts Orange Juice and shaken would, perhaps, be a good starting point.
All in all, this is an enjoyable spirit to drink, but my heart, for now, remains with the luverly Chase Smoked Vodka.
Posted by David Bridgman-Smith at 14:17 No comments:

For the second Pash-ion I shall look at a vodka given to me by Mr Pasha a little while ago, Green Mark Russian Vodka.
This is made from wheat and naturally-farmed yeasts before it is distilled. The water comes from an ancient aquifer—the age and softness of the water is thought to be conducive to making a good vodka.
Green Mark is made by CJSC a Russian spirits company that make it at two distilleries, one in Topaz and one in Siberia.

They also make a Green Mark vodka based on rye-bread, one flavoured with cedar nut and one in a rather fancy decanter.

The brand was launched in 2003 and since then, according to their website, they have become the second best-selling vodka brand in the world. The name Green Mark comes from a green seal used by the government in Russia to endorse the quality of a vodka.

Neat (room-temperature)
Soft, bready sweetness and a very slight burn at the end. Not the smoothest but quite flavourful.

Frozen
Smooth and slippery with a slight oily sweetness, a great vodka to sip from the freezer.

Martini
Clean and crisp, a little wheat and a slight creaminess. Smooth but still with a flavour. A very good vodka.

Harvey Wallbanger
I had read that this vodka is particularly good in long drinks so what better way to try it than in on of the most famous long vodka drinks, the Harvey Wallbanger.
Smooth and silky with almost no trace of any alcoholic burn, so it is a good vodka for long mixed drinks. Fresh and easy to drink.

In conclusion
I think Green Mark is a quality vodka suitable for drinking on its own and also in longer, mixed drinks. It is very smooth but still has some flavour—perhaps I would have preferred a little more flavour. A good all-rounder.
Posted by David Bridgman-Smith at 04:01 1 comment:

For this Curiosity Cabinet I shall look at something that truly is curious, it's called Scotsmac. It's not so curious because of the taste but more because of what it says it is and what it looks like it is.

Scotsmac is described as a blend of Mature British Wine and Fine Whiskey but the label certainly suggest something else, here is an annotated version. 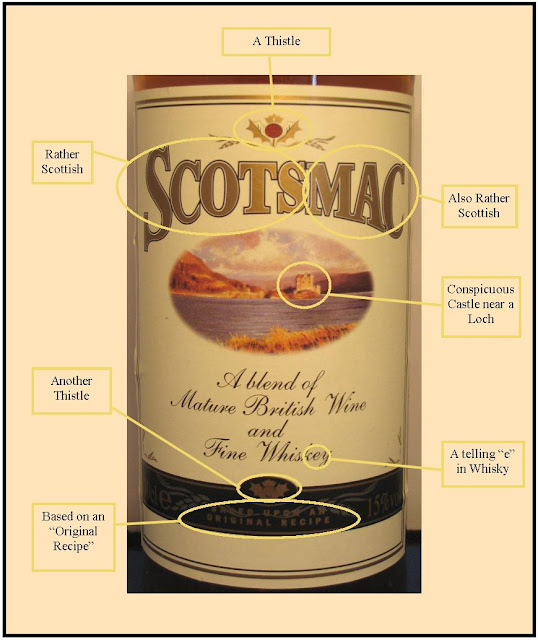 So there is lots pointing to this being Scottish and it could be a blend of British Wine and Scotch Whisky (as the label would seem to imply)—but as the word "whiskey" on the label contains an "e" it can't have anything to do with it, as all Scotch Whisky is spelt without an "e".*

Scotsmac is bottled at 15%ABV. What does it taste like?

Despite my ranting about the label I don't think Scotsmac tastes too bad. It's a bit syrupy, but vanilla oaky elements come through as does a honey/maple-syrup quality, almost as if you should pour it over ice cream. Like a whisky, I prefer it at room temperature, as I find adding ice makes it a bit bitter.

If you approach this as a whisk(e)y of any form you will be disappointed but if you look at it as a whisky liqueur you may be pleasantly surprised and at under £5 for 70cl it's not bad value either.

* In addition to Scotch, it also seems that Japanese, Indian, Swedish, South African, Australian, New Zealand, French, English, Welsh, Canadian and Dutch whisky is all spelt without the "e", whereas American and Irish whiskey include the "e".
Posted by David Bridgman-Smith at 11:11 12 comments: