Happiness is a torpedo on the sun deck 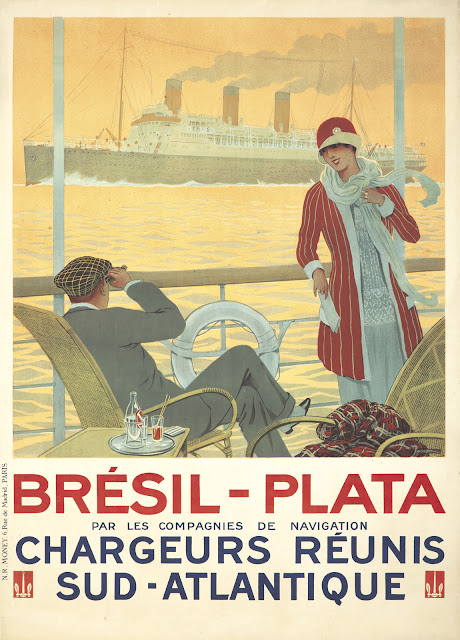 While looking for poster imagery that captured the tone of a Candlelight Club party last month to celebrate the golden age of luxury ocean liners, I came across the delightful image above. I found quite a high-res copy, enabling me to zoom in and look at the details. Details such as the drinks tray by the gentleman’s side. 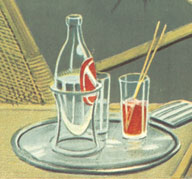 What’s he drinking? I don’t think I’ve ever seen a crazy bottle like that before, with no bottom, but I quickly discovered that it is known as a “torpedo bottle”, or sometimes “Hamilton bottle” after William Hamilton, a purveyor of carbonated drinks who produced many such bottles with his name stamped on them. It was used in the 19th and early 20th centuries to hold soda water and the like, and what you usually read is that the idea was it couldn’t be stood up, forcing you to store it on its side. This keeps the wired cork in contact with the liquid inside, ensuring it does not dry out, shrink and allow the pressure to escape. But I did also wonder whether the domed shape makes for a stronger structure, better able to resist cracking under the pressure inside. After a bit of poking around I found out that in Hamilton’s patent specification of 1809 he does indeed state that this shape of vessel “can be much stronger than or jar of equal weight, made in the usual form”. 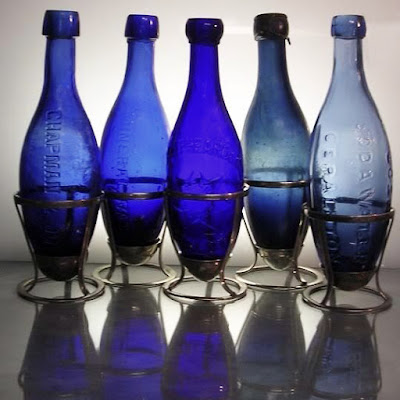 While it was obviously possible to make a conventional bottle that could take pressure (such as a Champagne bottle) this required high-quality glass that wasn’t worth using for a soda bottle. (And note that Champagne bottles generally do have a domed bottom too, but the dome goes inwards, enabling you to stand the bottle up.) By the time of the First World War glass-making had improved to the point where this shape was no longer necessary which probably explains why torpedo bottles died out.

I’ve found a couple of references suggesting that these bottles had a particular use on shipboard: because you couldn’t stand them up they couldn’t fall over if the ship pitched. This is appealing, as our picture is indeed on a ship. But this doesn’t make much sense, as a bottle like this on its side would obviously roll straight off a table or shelf, so you’d need to keep them in racks. And if you’re using a rack then it doesn’t make much difference what shape your bottle is.*

The stand that we see the bottle in must have been an inevitable consequence of the bottle design. (Some say that part of the intention of the torpedo design, on the manufacturer’s part, was that once you’d opened it you couldn’t put it down until you’d finished it, but I can’t see that going down well in polite society, and this benefit is not mentioned in Hamilton’s patent notes.) Note that the 1895 patent shown here only claims to have made improvements to the design, so bottle stands had obviously been around for a while already.

Out gent’s torpedo bottle has colourless liquid, probably soda water, and there is a glass of it on the tray. But the other glass contains something orange (or possibly red, given that this image looks as if it may have the colour balance skewed too much towards yellow). It could be an Americano (Campari, red vermouth and soda), although DBS thinks it is probably just Campari and soda.

I have tried to identify the label on the side of the torpedo bottle—an orange disc with a white diagonal stripe—but without success. It may be a figment of the artist’s imagination, but if you come across this logo in real life let me know! 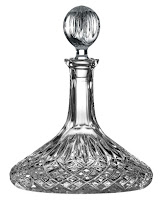 *  There is, of course, the ship’s decanter shape, which flairs to a very wide base, to make it bottom-heavy and stable on a moving ship. As far as I can tell this is the genuine purpose of the design—and it is worth noting that is effectively the opposite of the torpedo design.

Posted by Clayton Hartley at 14:39 No comments:

Bone in the throat 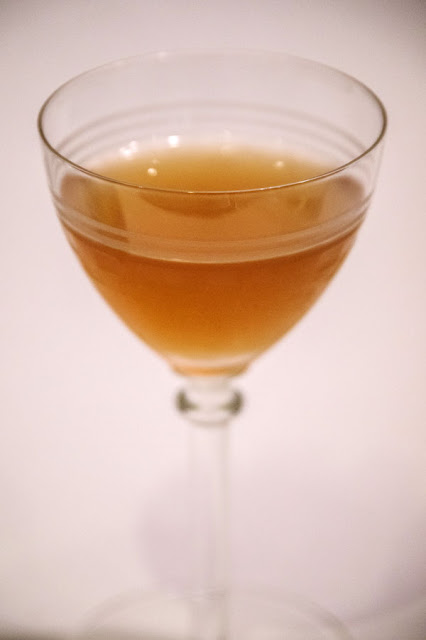 A friend announced that his favourite cocktails were the White Russian (vodka, Kahlua and milk/cream) and The Bone.

The what? I googled it and discovered it was invented by David Wondrich, apparently for the Chickenbone Café in Brooklyn. It’s one of those recipes that, once you’ve read it, you simply have to try—reader, I even went out and bought some Tabasco specially.*

It’s not an attractive drink. Even fine-strained it has a murky quality to it. You’ll notice that Wondrich does not specify anything like a garnish, just has you pour it into a shot glass, though as you can see I used something more foppish.

As you might expect from the proportions, it is mostly about the whiskey. (Wondrich specifies Wild Turkey rye 101-proof (50% alcohol), but I used Bulleit, which is a high-rye bourbon. But even in small quantities the other ingredients make their presence felt. The lime is clear, but not mouth-puckeringly sour, just fruity, while the sweetness of the sugar balances it and smooths the whiskey like in an Old Fashioned. And the odd thing
is that there is a suggestion of salt, even though there isn’t any. (Perhaps some knee-jerk part of my brain is thinking of tequila…) 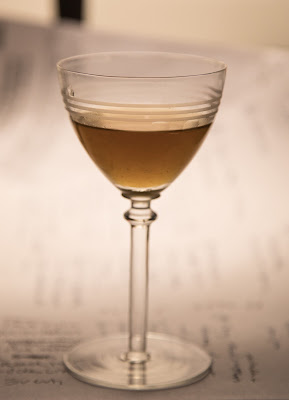 And then there is the Tabasco. Don’t try this drink if you really don’t like spicy food, as three dashes is enough to pack a punch. Each sip is a journey, with whiskey up front, then the sweet and sour notes sort of slide round the side of your tongue, with that inexplicable saltiness bringing up the rear. You think that is it, but then the pepper sauce jumps out from behind a tree and delivers a sucker-punch. For something relatively simple it holds your attention from mouthful to mouthful, stimulating every part of your palate that it can find.

*  I was quite surprised to discover I didn’t have any—I always thought of Tabasco as one of those things like Angostura bitters that you never actually run out of. You just buy a bottle once, in your youth, and carry on using minuscule amounts now and then for the rest of your life. Although now I think about it, I do vaguely remember looking at the half-empty bottle I had before, doubtless with a price label in pre-decimal currency, its contents now a sort of grey colour, and thinking that maybe it was time to lay it to rest in the drains.

** In fact it looks as if Wild Turkey Rye in the UK is now only available at the 81 proof strength.

Posted by Clayton Hartley at 13:21 No comments: