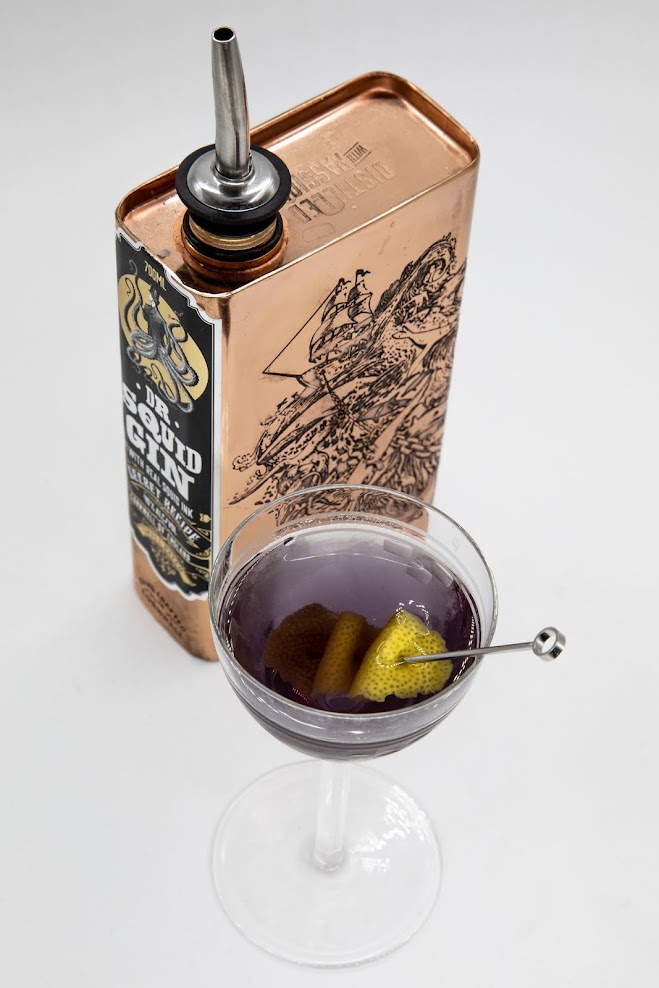 If you think Brussels sprout gin is wilfully strange, check this out. You may remember how taken I was by both the regular Caspyn Gin and the Midsummer gin from the Pocketful of Stones distillery: I noticed recently that they have now added a squid ink gin to the range.

You read that right. Apparently they’ve been trying to make Dr Squid Gin work since 2018, and the final recipe uses, they admit, only a very small amount of squid ink. The website doesn’t say if it uses their regular gin as a base (as the Midsummer gin does), only that this version also features vanilla and sea buckthorn. Before you even clap eyes on the gin itself you are struck by the other departure with this product—instead of a bottle it comes in a rectangular copper flask. I’m wondering if this was a practical necessity—for example, if it turned out that the colour of the gin was unstable if kept in a transparent bottle—or if they just wanted find a way to add to the “special edition” vibe. If you look at comments and reviews, customers have certainly had problems pouring from the flask without spilling gin all over the place, and my example actually came with a speed pourer to jam into the neck to create a reliable spout, so clearly they have conceded that there is a bit of a design flaw here. Other comments suggest that some customers detected a metallic taint in the gin or allegedly found bits of copper swarf in the liquid. 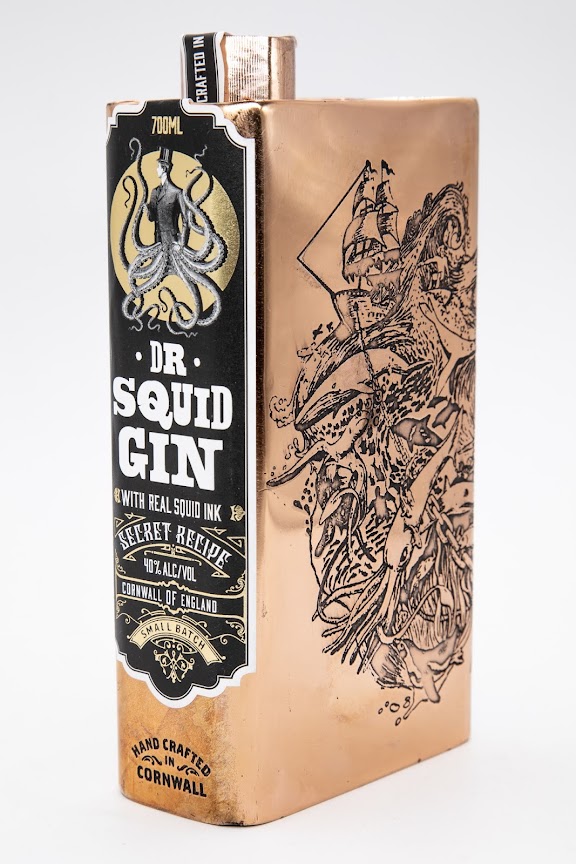 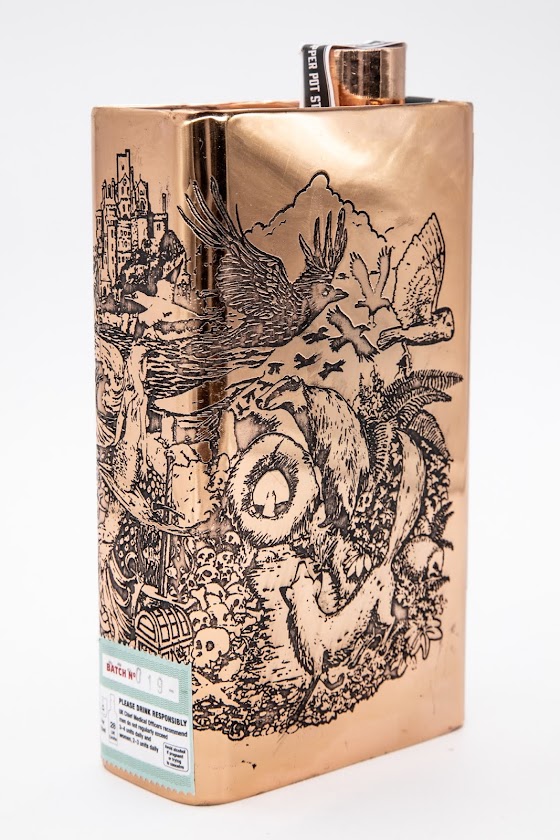 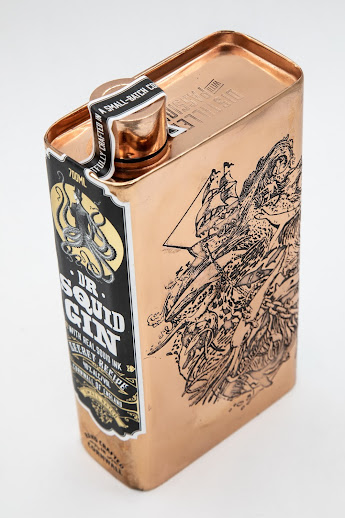 As you can see, the exterior is etched with Cornish scenes: on one side are sea creatures (shark, whale, turtle, penguin, some fish and an evil-looking squid), a surfer and a galleon, while on the other we find birds and land creatures, including a fox, a badger and a hedgehog, plus a standing stone with a hole through it (Mên-an-Tol, I assume). On the spine, uniting the land and sea, are a mermaid, a chest of pirate treasure, some decorative skulls and what I think is St Michael’s Mount. Technical problems notwithstanding, this flask is clearly not cheap to make, which goes some way to explaining the hefty price tag of £50 for 70cl.

There is no explanation given as to why it’s “Dr Squid” Gin. Who is Dr Squid? The stick-on label features a top-hatted Edwardian gentleman whose lower half is a squid, so I guess it’s him. But it’s a bit odd, having a tin that is all about the Cornish identity of the gin, then a label and title that goes off on Hendrick’s-esque self-consciously-eccentric diversion. 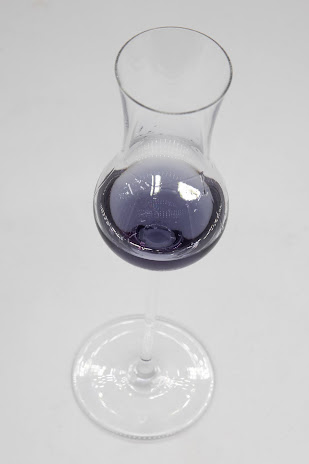 Part of the USP of this gin is it’s colour—squid ink black as it comes from the can, but miraculously turning pink when you add tonic. How does that happen? Well, as you can see from the photos, it isn’t really black at all, but dark purple; so it’s no surprise that this purple becomes pink as you dilute it. From my experiences of cooking with and eating squid ink in Italian cuisine, I don’t remember it being this colour, but according to Wikipedia, while octopus ink is black, squid ink is indeed “blue-black”.

Some reviewers have complained that the gin consequently has a fishy smell, but I must say that I cannot detect anything of that nature. Sniffing the open flask, I get a hit of bold juniper plus warm orange and lemon citrus notes. In the glass I also get a strong coriander element, plus something floral like violets (and I don’t think that is just suggested by the colour!). There’s also a strong herbaceous element—the first thing that springs to mind is parsley, perhaps blended with watercress and a smidgeon of pungent sage.

On the palate it is immediately sweet and smooth (perhaps from the vanilla, though I don’t obviously get vanilla as such), with flinty juniper, prominent coriander seed and a dry finish. It’s a powerfully flavoured gin—you can’t help wondering if this is done deliberately to mask the taste/smell of the squid ink! There’s something in the herbal/mentholic notes that make me wonder if they have included rock samphire in the botanical mix, which would be a consciously Cornish thing to do.*

That colour creates some odd effects in cocktails—a simple Martini is a terrifying murky presentation. At first I try a largely undiluted version, and the herbal notes are unsurprisingly brought out, the juniper and coriander; I’m also getting a sort of sweet/pungent effect that concentrates on the tongue like anise (which, oddly, I didn’t notice when tasting the gin neat). I try a heavily shaken version to dilute it, but the only thing that changes is a slight cellulose note. I have to say that I do not think this gin makes a terribly good Martini. A few days later I try a Martini again and this time it’s really that mentholic-pungent character that strikes me, somewhere between sage and anise.

Another cocktail I often use to put a gin through its paces is the Corpse Reviver No.2—equal parts gin, lemon juice, triple sec and Cocchi Americano (standing in for Kina Lillet, which is no longer made), plus a dash of absinthe. It’s a powerful combo and some gins get smothered by it. Made with Dr Squid, it’s certainly a nice, complex drink, with sweet, sour, bitter and herbal elements—but then it always is. The coriander comes out noticeably and one thing I notice for the first time with this gin is a saline element, which I don’t recall being a characteristic of this cocktail. Of course the colour is weird, with the purple gin meeting the yellow of the lemon juice to produce a not-unattractive pinky colour. But from a flavour point of view, the cocktail is certainly a success. It makes me think that I should try more combinations of Dr Squid and absinthe.

On the website they mention that it works well in a Gin Mule, i.e. served with ginger beer. I try this, using Fentiman’s ginger beer: it’s nice enough, the juniper adding a sort of backbone to balance the sweetness of the mixer. Mrs H. is not keen, claiming she gets a “TCP” note—I don’t know how widely available TCP is, but if you don’t know it it’s a household antiseptic with a strong phenolic smell. Which brings us back to that pungent aromatic element.

Shaun Bebington, the man behind the distillery, was helpful last time so I drop him a line and he comes back with some interesting answers. He confirms that Dr Squid does not use their existing gin as a base. “It is a new recipe we developed to compliment the main ingredient, squid ink,” he explains. “Botanicals included in this recipe are coriander, lemon peel, sea buckthorn, cinnamon, vanilla, hibiscus, black mallow and blue pea flower. The phenolic taste you're getting is a direct result of the squid ink being used.”

He also reveals the truth about the tin: “It was envisioned for the whisky we are planning to release later this year but was too good a combination not to run with it for Dr Squid—the fact that it stops UV is an added bonus. Saying that though, any floral infusion post distillation will suffer from oxidation resulting in a loss of colour anyway.”

So does this mean that the colour of Dr Squid will actually fade with time? “Yes the liquid will fade,” Shaun confirms. “Even out of the light. All liquid will have diluted oxygen in it as well as the oxygen in the space in the bottle. So unless the liquid is vacuum packed and has less than 1.8 parts per million of diluted oxygen it will oxidise and fade over time. Our sister distillery in South Africa, www.wcdistiller.com, is working on this at the minute with their Night Shade Gin.”

Thinking about the success of the Corpse Reviver No.2 and the way that phenolic element in the gin reminds me of anise, fennel, sage and parsley, etc, I poke around for more cocktails that combine gin and absinthe and come across the Tuxedo. Invented at the Tuxedo Club in upstate New York some time in the late 19th century (the earliest printed record is in Harry Johnson’s Bartenders’ Manual from 1900), it was originally equal parts Old Tom gin and dry white vermouth with variously 1–3 dashes each of maraschino and absinthe. Later versions play around with the proportions, use dry gin and sweet vermouth, or add a spoonful of sherry as well. It’s essentially a variant of the Martini, which evolved around the same time. Simon Difford has assessed the various iterations and his own version, which I try with Dr Squid, uses a 50:50 blend of sweet and dry vermouths.

It’s actually a very interesting cocktail: I was afraid that the high proportion of vermouth to gin might make it seem watery, but with the hits of orange, absinthe and aromatic spices from the Angostura it’s complex and reasonably balanced. For me it’s a bit on the sweet side (and I was actually using dry gin rather than the Old Tom prescribed). I think it needs some sweetness—although the Tuxedo Cocktail No.1 from the 1930 Savoy Cocktail Book is simply equal parts dry gin and dry vermouth with two dashes of absinthe and a strip of lemon peel, so much drier—and I later try it with just dry vermouth, controlling the sweetness using the maraschino, and then again using a 3:1 ratio of dry to sweet vermouth, but it didn’t seem to recapture what seemed to make it all pull together the first time.

Would I recommend Dr Squid Gin? You can tell that a lot of effort and polish has gone into it; it’s certainly interesting, and tasted neat it reveals intriguing strands of flavour. But in most cocktails (and even in a G&T) I confess that the drink actually tastes nicer with a different gin. If you particularly like that phenolic thrust it might be to your taste, and it does seem to work best in strongly flavoured cocktails that have absinthe in them. But then there’s the price: unless you particularly want one of these copper flasks then it is hard to justify.

* You may have encountered marsh samphire in fishmongers or delicatessens: it’s a salty crunchy thing that is in season in the UK for a few weeks in June, growing in marshy areas by the sea. Rock samphire, or sea fennel, is not actually related (it’s part of the carrot/deadly nightshade family) and grows on cliffs in Cornwall. While holidaying there I did harvest what I’m fairly sure was rock samphire and tried eating it—it had a powerful phenolic taste and aroma (“fumes” would be a better word). Apparently it’s considered a delicacy, and is a good source of vitamin C, but I wasn’t convinced. It’s traditionally pickled, so maybe I should try preparing it that way next time I’m in the area.