Down home with Jim Beam. In Shoreditch. 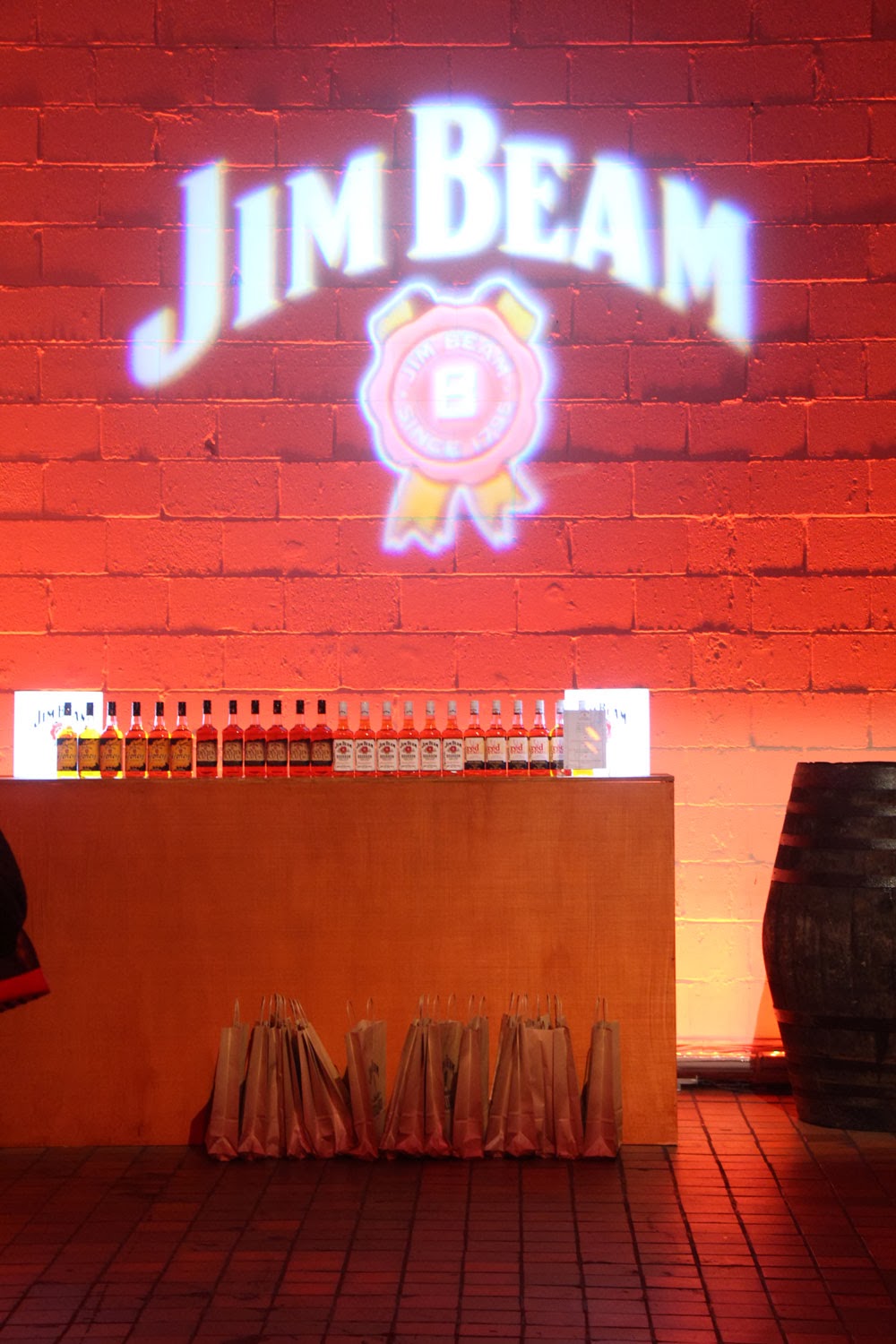 Before Christmas I was invited to the “Jim Beam American Stillhouse”. In town for just a couple of days it promised to transport me to “the rolling hills of Kentucky”, as well as offering “an attack on the senses through an authentic distillery experience”. Blimey, that sounds like the bourbon equivalent of a bungee jump, or perhaps just a drinking competition at an illegal Siberian still.

Run by the same people who brought us the impenetrably fey Courvoisier “Institute of Grand Cocktails” in 2012, this particular “immersive experience” proved to be much more down-to-earth. There were just the three rooms, erected from partitions within a space at the Old Truman Brewery, on Brick Lane in Shoreditch, connected by corridors plated with the ends of barrels, to make you feel like a termite creeping through a cavernous warehouse filled with slumbering whiskey. The first was the Heritage Room, where we were met by none other than Fred Noe (Frederick Booker Noe III, to give him his full honorific), seventh generation master distiller and great grandson of Jim Beam himself, who built the distillery upon the repeal of Prohibition in 1933.

Fred is a likeable character. He told us how to taste bourbon by doing the “Kentucky chew”, but was keen to emphasise that the brand is very easygoing about how you drink the product. The ringing refrain throughout his address was, “That’s OK.” You slightly got the impression that he was a bit overwhelmed by the weight of the heritage represented in the Heritage Room, and that his main goal during his tenure at the top was not to mess with anything that was clearly not broken. (Jim Beam is the biggest selling bourbon in the world.) He considered us from a fake veranda under the gaze of a huge photo of a statue of his father in the stillhouse grounds—the statue itself may be colossal too, though it’s hard to tell from the photo.

We had all been issued with “passports” and before leaving the Heritage Room we had to ours stamped. I’m not sure why we needed a passport to move from one room to another in a mocked up stillhouse in Kentucky (especially ironic given the huge proportion of Americans who don’t have passports because they have never left the country). But at least I can prove to US immigration authorities that I have tasted both Jim Beam regular and Jim Beam Devil’s Cut.

The latter was introduced in the next chamber, the Distillation and Ageing Room, where we were assailed by some highly dodgy Kentucky accents (Fred’s was clearly the only genuine one in the building) explaining to us how and from what, by law, bourbon can be made. (For the record it must be at least 51% corn, the rest being rye, wheat and/or malted barley; it must be made in the US, distilled at less than 80% ABV, entered into the barrel at no more than 62.5% ABV, bottled at no less than 40% ABV, and with no additives other than water to adjust the ABV; it must be aged fin new, charred white oak barrels; to be called “straight bourbon” it must be aged for at least two years.)

The Devil’s Cut is a product launched about a year ago. Deriving from the term “the angels’ share”, referring to the spirit that evaporates from the barrel during the years of ageing, the name Devil’s Cut represents the opposite—spirit that is left in the barrel at the end.

After the whisky is ready and the barrel is emptied, there is a traditional practice known as “sweating the barrel”, where a little water is added the empty barrel, which is then kicked around to soak out any whisky left in the wood. Most distillers rinse or soak the barrels to try and extract these last drops, and Beam have apparently developed a proprietary technique. These—for want of a better word—dregs are then blended with six-year-old whisky. We get to sample some of the finished blend, and it is a darker, more intense tipple, with strong wood flavours and almost mouth-puckering tannins. Very agreeable, and suggestive of mixological potential.

The final chamber is the Mixology Room where bartenders offer four different cocktails showcasing spirits from the Jim Beam range. Sadly we’re only allowed to try one each: I go for the Red Stagg Manhattan, utilising Beam’s black cherry flavoured bourbon, which doesn’t leave much of an impression; more interesting was the sip I had of someone else’s Mint Julep made with Devil’s Cut and marmalade syrup.

We have a final treat in store: there is a big barrel in the lobby, which we are all invited to sign. Apparently it will be taken back to Kentucky and filled with bourbon, and when it is emptied in four years’ time—assuming cirrhosis hasn’t finished us off in the interim—we each get a bottle from the barrel.

We gave last weekend’s Candlelight Club a “Resolution Busters” theme: apparently the third week in January is round about the time that a lot of people who made New Year resolutions give up and go back to their old ways. Something like the Candlelight Club was never really in a position to offer a self-improvement angle, so we decided to go the opposite way, and our cocktail menu this time was based around things you might have hoped to give up, or indeed take up. Our Roll-Up the Barrel cocktail featured Jade’s Perique tobacco liqueur (as a nod to those trying to quit smoking); our Off Down the Gin cocktail featured a Lucozade Sport reduction (the world’s first isotonic cocktail? Replaces the gin lost through exercise).

We also had a Girl’s Best Friend cocktail which smuggled in chocolate via a harmless, neutral vodka and absinthe base. Our mixologist these days is David Hamilton-Boyd of Organic Spirit and his recipe included La Maison Fontaine Chocolat, a chocolate and French absinthe liqueur. I know Jenny of Sip or Mix who distributes La Maison Fontaine’s absinthe here, but I did not know about this product and was interested to check it out—off the top of my head I could certainly imagine that chocolate and absinthe might go together well.

The back label tells how this beverage was inspired by a hand-written recipe for crème de cacao dating from the 1920s and discovered in a recipe book at the distillery, which leads me to expect an intensely chocolately experience, with a little absinthe blended in. But as soon as you uncork the bottle you are hit primarily by that white absinthe smell: it’s a fragrance that all bleu/blanche absinthes seem to have, something I can only describe as overripe buttercups. With a hint of Plasticine. Perhaps it is wormwood or some other herb, but it lends a characteristic sour, floral element, quite sharp in this case. On top of that this drink has orange, anise and coriander seed on the nose, plus chocolate too, of course (though the latter is not dominant). There are suggestions of rum and ginger as well, reminding me of rum and raisin ice cream. But on a more mundane level you could say sit smells like a Terry’s Chocolate Orange that has been kept in the same cupboard as a box of liquorice allsorts.

The same balance follows through on the palate, which is again ruled by the absinthe elements. It is also pretty sweet (and, at 25% ABV, much lower in alcohol that absinthe itself). The chocolate is definitely there in the mix, but it is relatively subtle. In fact, in my quest to establish to what extent chocolate and absinthe are indeed well matched, I find myself spiking this drink with Mozart’s chocolate bitters, which are very chocolately indeed, particularly on the aroma side of things.

This leaves me thinking that the two things do indeed go together, but in fact my curiosity drives me to try adding the bitters to a green absinthe, in this case La Fée’s new recipe Parisienne. Although this absinthe is less anise-driven than the old formula, it does work better. La Fée’s blanche absinthe seems a bit more anise-led, so I try adding a drop or two of the chocolate bitters to that and the effect is very pleasing and harmonious indeed. The bright aromatic thrust of the aniseed seems to partner perfectly with the warm richness of the chocolate.

As for La Maison Fontaine’s offering, it is a curious beast. If you primarily like chocolate you may be disappointed—and you certainly have to like white absinthe to enjoy this drink. But, as I say, comparing it to a couple of other white absinthes reveals that this beverage has a curious, pungent fragrance all of its own.

On La Maison Fontaine’s website there are some cocktails and suggested serves, several of which focus on combining this liqueur with salt: either licked on the side, as if drinking with a tequila shot, or dropped into the drink, or in the form of cheese and dried meats consumed alongside. I try it with some shavings of parmesan and it does indeed work well, the sweetness balancing in the same way that sweet chutney, quince jelly or fresh figs might go with cheese. I even find that the sharpness of that characteristic white absinthe element makes a good foil against the intense savouriness of the cheese. For my money this is the most pleasant way to consume the liqueur.

My eye is also caught by another suggested cocktail, a Negroni variant called a Trinité that combines 30ml of the Fontaine liqueur with 20ml Campari and 25ml reposado tequila. This too is enlightened—there is a synergy, or perhaps just a family resemblance, between the pungency of the absinthe, the soft, smoky, herbal notes of the tequila and the bitter, earthy rootiness of the Campari, with the liqueur also bringing a balancing sweetness that comes from the red vermouth in a normal Negroni.

Whoever created the cocktail recipes and suggested servings has done a good, thoughtful and inventive job. But ultimately all these drinks are dominated by that odd flavour. I don’t have any normal La Maison Fontaine blanche to hand to see how similar it is, but checking a couple of other white absinthes it seems to me that in those, perhaps more anise-inflected, contexts the flavour in question presents a better, and less disconcerting, balance than it does in this liqueur.

As a final experiment, I make a sort of Sazerac, a classic absinthe cocktail, but incorporating the Mozart bitters as well:

Stir all but the absinthe with ice and strain into a chilled tumbler which has had the absinthe rolled around its inside. Squeeze a piece of lemon peel over the top; purists discard the peel rather than dropping it in. I actually added a bit more than just the absinthe residue, about a coffee spoon more.

This is a corker. Lift it to your nose and you get chocolate and lemon and dark, woody spices like cinnamon, plus a higher spice note from the anise too, and a hint of marmalade, all in perfect equilibrium. On the palate it is just the right level of sweetness for me, balancing the fire of the spirit, with all those spices darting around your tongue too. Probably the most satisfying Sazerac I’ve ever had. So there.