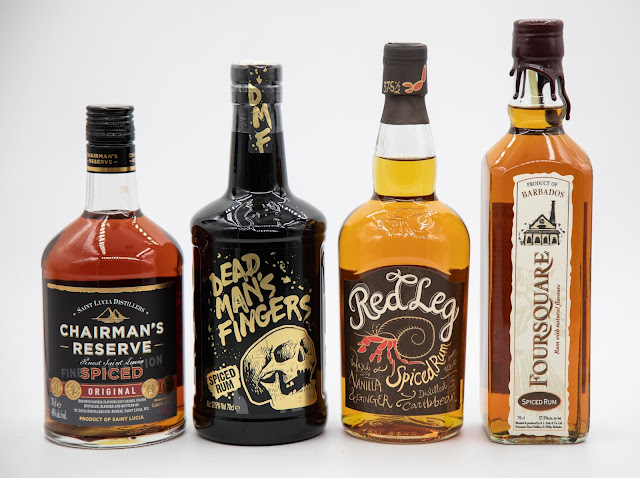 I asked David, who runs the food and drink side of the Candlelight Club, if there was one of our previous Christmas cocktails that we could offer people to make at home, as a sort of vicarious seasonal experience. The cocktail in question was the Spiced Clementine Daiquiri (see below). The base spirit is spiced rum, which got me pondering.

At some point in the past I acquired a bottle of Sailor Jerry’s spiced rum and I found it repellently sickly. I’ve rather avoided spiced rum ever since. But I also remember, at the launch of the Chairman’s Reserve Rum range, that they had an incarnation that I thought was actually not bad. So I did a bit of online research to collate as many “top spiced rums” lists as I could find and, based on these recommendations, ended up with a short list of four. So, in the spirit of scientific rigour for which the Institute for Alcoholic Experimentation is renowned, I bought all four. 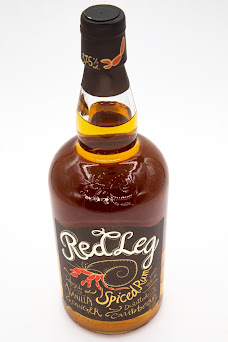 The cheapest on the list is Red Leg, which is common in supermarkets and can be had for £15 a bottle. It’s made from “Caribbean” rum, aged in barrels for an unspecified time before being infused with vanilla and ginger. It is named after the Red Legged Hermit Crab native to the Caribbean. It’s a golden colour, with a nose that is a strong, rather cloying, blast of vanilla and caramel or butterscotch. On the palate it is pretty sweet with a flavour of brown sugar and vanilla, with some heat: it’s only 37.5% ABV, so I’m guessing this might be from the ginger, although aside from this the flavour of ginger is not hugely apparent. It’s quite one-dimensional, all about the sugar/vanilla thing.

Next up is Dead Man’s Fingers, created at the Rum and Crab Shack in St Ives, Cornwall. These crazy cats wanted to add some unexpected flavours (I mean, does rum and crab even go together?), citing Cornish saffron cakes, spiced fruit and an ice cream they serve made with sweet, concentrated Pedro Ximenez sherry, plus “nutmeg, vanilla and a hint of orange”. It’s a darker colour than the Red Leg and has a powerful nose with a noticeable ginger element, plus what smells to me like lime. There is also a rather savoury mid-note, almost like onion, and I can get saffron too. After it opens up in the glass a smoky element emerges. On the palate it is less sweet than the Red Leg. There is definitely vanilla (which seems to be the main defining flavour in spiced rum), but a prominent flavour of fresh ginger, giving it a fiery kick, like ginger beer, and a slightly bitter finish. It leaves an aftertaste of Turkish delight, the kind that comes dusted in icing sugar. 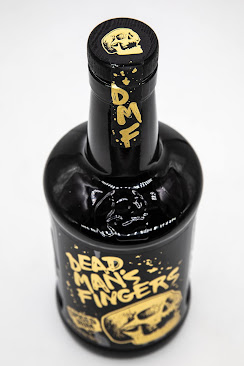 Despite the skull on the bottle, Dead Man’s Fingers is not named after anything piratical, but after the local nickname for a crab’s gills (a bit of the crab that is discarded, as it doesn’t taste very nice). So that’s two rums named after crabs. The next up is Foursquare Spiced Rum which, by contrast, is named after the sugar estate, apparently one of the oldest in Barbados, where they’ve been making rum since 1640. The bottle gives nothing much away about its contents, only that the blending recipe is a secret known only to generations of the Seale family. It is very lightly flavoured compared to the others, paler than Dead Man’s Fingers and not really sweetened at all. Many reviewers talk about a primary flavour of cinnamon, but for me the most noticeable element is coconut, with a hint of sherry, which gives it a refined edge, and maybe a whiff of oatmeal. (I don’t know if there is any coconut in it, though I detect a hint of a similar aroma on the next rum and I wonder if it’s an impression created by clove in combination with something else.) On the tongue it is also mostly coconut that I get, plus the dry barkiness of cinnamon. Mind you, perhaps I’m doing it a disservice by tasting it after the gutsy punch of Dead Man’s Fingers, but I’m not really getting much at all from this rum. I try it again the next day, and I would say that it does have a quiet, genteel polish to it, but compared to the others there is not a lot going on. 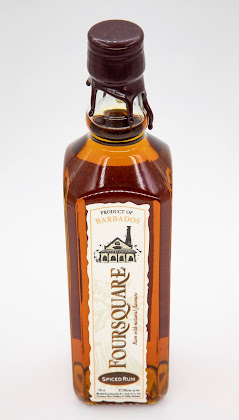 The Foursquare is about £26 a bottle, and my final sample creeps up to £32—the Chairman’s Spiced Rum. It’s also 40% ABV, while all the others are just 37.5%. The label admits to “Caribbean fruits, bark and spice”, naming cinnamon, vanilla, nutmeg, clove and bitter orange specifically. The nose is buttery, with a strong waft of orange peel and some cocoa. It’s a bit like smelling a Terry’s Chocolate Orange. There is also a strong note of raisins, plus cinnamon and clove. The palate is led by the orange note again. They talk about “bitter” orange, but the result is rich and smooth, a bit like eating a liqueur-filled chocolate—though not particularly sweet as such.* This rum is the one that I would choose to drink neat, smooth but not too sweet, rich but subtle, detailed and not overblown. As you dig in new flavours emerge, all deftly blended. Going back to the Foursquare, the latter is certainly cultured enough to drink on its own, but it does seem thin and dry by comparison with the Chairman’s.

But let’s not forget that the starting point for all of this was a cocktail. How do these rums perform when mixed? Here is the recipe: 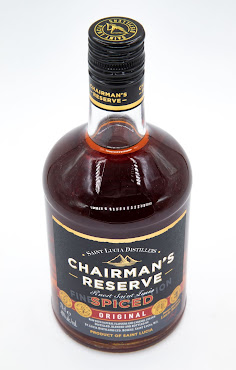 Shake all the ingredients together with ice in a cocktail shaker and strain into a (largish) cocktail glass. Garnish with a strip of clementine or satsuma zest.

Clementine juice is something that most supermarkets seem to sell at Christmas, though perhaps not at other times. It’s actually strikingly different from orange juice, sharper with more or a rindy pep, almost as if it already has a little lime in it. In any case, for my palate the added lime juice is needed to balance the syrup, but if you have a sweet tooth you may wish to leave it out. With spiced rum’s typical flavours of vanilla, ginger, cinnamon, nutmeg, orange peel and clove, plus the clementine juice (and Angostura has quite a cinnamon stripe to it) you've basically got Christmas in a glass. (I also tried it with a bitters that David had made a previous Christmas, which is heavy on clove, and this really boosted the Christmasy combination.) 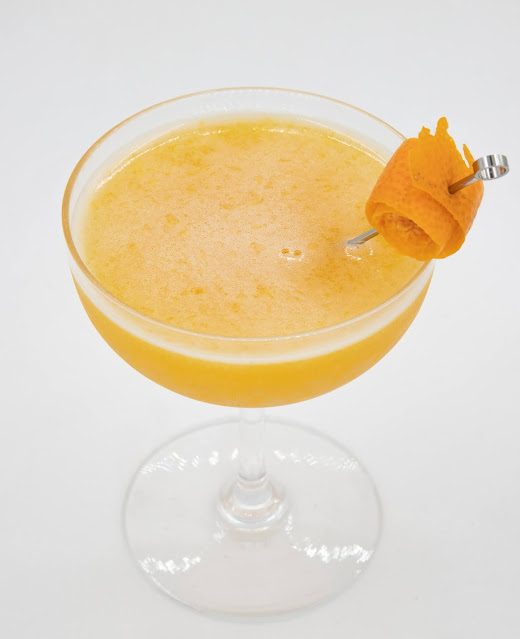 Although I found the Red Leg rum a bit sickly on its own, it works fine in this cocktail, and it was Mrs H.’s favourite out of the lot, though she has a sweeter tooth than me. Dead Man’s Fingers benefits from its strong flavouring and punchy profile, easily making its presence felt against the other ingredients. For me this was probably the best choice for the drink, though Mrs H. didn’t like it so much—I think the edge of bitterness it brought wasn’t to her taste. The Foursquare was the least successful here: it’s too delicate to make much of an impression, and if you try to adjust this by adding more of the rum, it just unbalances the cocktail. Finally, the Chairman’s Spiced Rum certainly does work well in this drink, though I would argue that its leading flavour of orange might get a bit lost against the other citrus in the drink—and to be honest I’d rather save it to drink neat.

I also tried these rums with Fentiman’s ginger beer, with and without a squeeze of lime (so a Dark and Stormy cocktail). For me the Red Leg is just too sweet without a hefty dose of lime juice, and again the Foursquare got lost, but the other two worked well. You might think that the Dead Man’s Fingers with its strong peppery ginger character would be overkill with the ginger in the mixer, but it seemed to work OK. Again, I think the vividness of this rum makes it good with mixers in general.

But for me the star of the show was the Chairman’s Spiced Rum. It’s the only one I would choose to drink neat, and that is indeed what I was doing with it over Christmas. In a way it’s the first spiced rum I’ve tasted that, for me, justifies the existence of spiced rum as a concept—they are generally too sweet, crude and overblown for me, but this example is complex and poised. Whether you’d want to mix with it, given the price, is another question. If you specifically want a spiced rum for mixing, at £18 the Dead Man’s Fingers is a good bet.**

* I have a distant recollection that the Greek spiced fortified wine Metaxa tastes a bit like this, with an orange thrust. I’ve got some Metaxa in the cellar so I go and check: the dusty bottle is 95% empty, so probably not at its best, but in fact it has a floral nose and a muscaty taste, so nothing like the rum at all. Forget I ever mentioned it. And I can report that the Chairman’s Spiced Rum is a far superior drink in any case.

** The Kraken is another popular spiced rum, but I didn’t include it in this experiment as it didn’t really feature in my initial trawl of other people’s top-spiced-rum lists, but I have tried it at a trade show once and I don’t recall being terribly impressed. I think was was probably too sweet, and the underlying rum a bit rough. 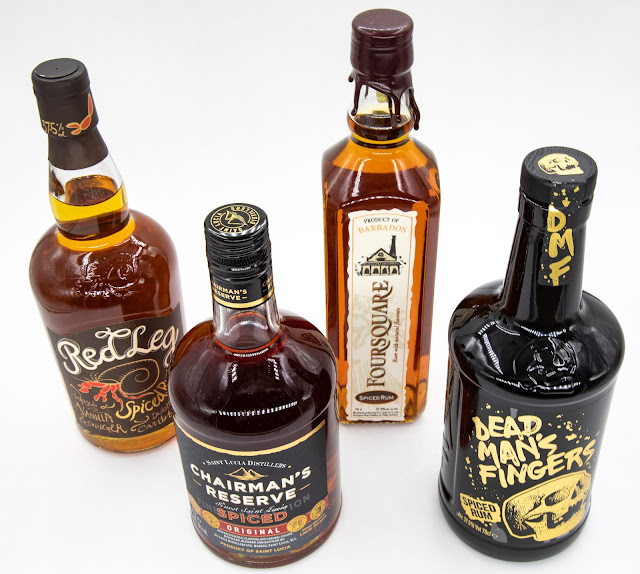