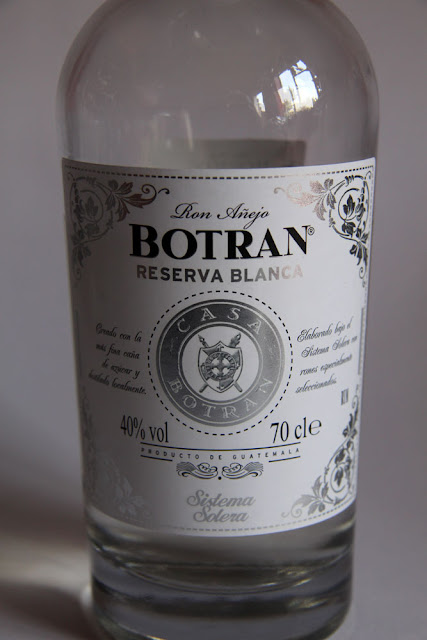 Francis from Distillnation came round the other day to drop off some absinthe and he presented me also with a handsome bottle of Botran’s new Blanca Reserva. It doesn’t officially launch in the UK till later this year, but when it does it will retail for about £22.

Botran are a Guatemalan family firm who have been making rum since 1939. Originally sugar cane planters, they still make all their rum with virgin cane juice from their own family estate in Retalhuleu, in the south of the country, using their own strain of yeast taken from pineapple, before ageing it slowly in the cool mountain town of Quetzaltenango. They use a mixture of bourbon (sometimes re-charred), sherry and port barrels and practise a “solera” system, more usually found in sherry production, where rums of different ages are constantly blended. To get an idea of just how elaborate this is, have a look at the flow chart below. Their current range consists of the Reserva, containing rums aged 5–14 years, and the Solera 1893, a drier, more profound blend of rums aged 5–18 years.

Their new white rum is not quite what it seems: for it too has been barrel aged using the solera technique; the current bottling contains rums aged 3–5 years and is made in the same way as the Reserva, except that there is no port barrel ageing. It is then charcoal filtered to remove the colour. Whereas most white rums are intended as mixers, Botran say theirs can be enjoyed both in cocktails and simply on the rocks.

Straightaway I can tell you that this Blanca makes a cracking Daiquiri,* with the rum coming through as tight and fruity, with a petrolly spirit thrust that pokes through the lime and sugar, yet bonds smoothly and perfectly with those flavours too. I try a Mary Pickford,** and again the rum lends an elegant power to this frothy, fruity number.

Neat, the Reserva Blanca has a juicy nose with elements of marzipan and cherry Bakewell. The palate is very soft and smooth for a white rum, and maintains the marzipan flavours. I have bottles of Bacardi and Havana Club 3-year-old to hand so I try them alongside: the Bacardi has a dry, sour nose by comparison, whereas the Botran is mellow and inviting with hints of chocolate. Likewise the Bacardi is thin and sharp on the palate, with a hint of blue cheese and seemingly a bit watery (though it is 37.5% ABV compared to the Botran’s 40%).

The Havana Club has, unsurprisingly, a strong wood element on the nose and a tequila-like sourness. The palate likewise has a sawmill wood character plus a crude banana fruit. It somehow reminds me of the inside of a rubber balloon, and is quite tough to drink on its own. All of which goes to show how sophisticated the Botran is for a white rum, and how it is indeed a white rum you can enjoy neat.

OK, so the Botran Reserva Blanca will retail for almost double what you can find the Bacardi and Havana Club rums for in supermarket offers, but inevitably that careful ageing and filtering is going to come at a price. But how does the Blanca compare with the standard Botran Reserva? The Reserva has more obvious wood, plus dried fruit like figs, orange and raisins. I have a bottle of Havana Club 7-year-old knocking around so I do a comparison: this is dry, appley like Calvados and has a more stern, single-minded balance. By comparison the Botran Reserva is wreathed in sweet sugar and almond softness and smooth, smoky wood.

Side by side, the Blanca has a much quieter nose than the Reserva, delicate, clean with a hint of a vodka-like medicinal note. The Reserva on the other hand immediately hits you with strong sherry notes, plus all that dried fruit. On the palate the Blanca channels more of the underlying sugar spirit character, a fuel for cocktails, but so much smoother than a typical white rum. The Reserva, by comparison, has a distinct oak wood character, which carries an acidity on the tongue that makes it in some ways less smooth than the Blanca.

This comparison helps me understand where the Blanca fits into the range. Whereas the Reserva (and more so the Solera 1893) is about in-your-face character and complexity, the Blanca is more about smoothness. I can see why they might encourage consumers to drink it neat, perhaps not as a profound character study, but as a clean, classy shot like premium vodka.

With this thought in mind I tried the Blanca from the freezer. It works OK, coming across at first with vodka-like medicinal notes, before the fruitiness hits and the sugar. I wouldn’t especially recommend it (but then I’ve never met a decent vodka that I thought was improved by being served frozen), yet it works well enough. For me the Botran Reserva Blanca works best in simple, classic rum cocktails.