This week is National Calvados Week (for more information and events check out http://www.nationalcalvadosweek.com/) and I am rather a fan. Any one who has ever spoken to me about the French apple brandy will know that I am very keen on keeping it in my hipflask during the winter—the spicy apple note is cosy and comforting and the spirit is thoroughly warming. It takes the edge off the world; after all, isn't that the point of a hipflask? 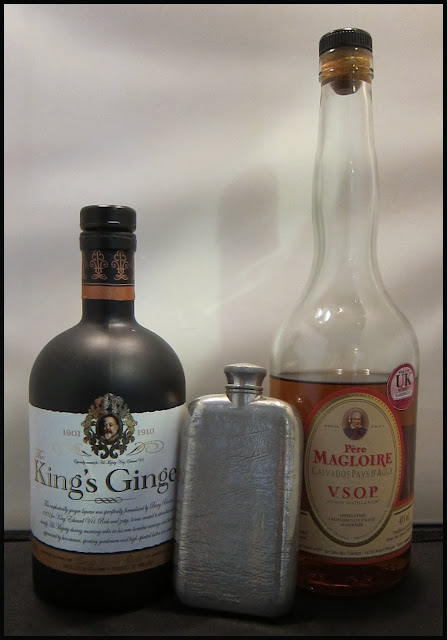 Given this affinity I decided to mix up a special Anglo-Franco flask utilising another warming spirit notably King's Ginger. The recipe is simple:

In the interests of thoroughness in experimentation these tasting notes were taken after the hipflask had been in my pocket for an hour, to warm up, and was sipped after an early-morning frosty stroll.

The dry, fruity apple is complimented by the contrasting sweetness of the liqueur but on the finish the sweet spice of the spirit and the ginger combine and mix together for a warming after-glow. After a long walk across frozen heathland few thinsg will warm the cockles as well as this.


* Some details on Pere Magloire

Pere Magloire is a Calvados Pays D’Auge, which means that is subject to even more regulation than regular Calvados. It has to be made in the Eastern part of the Calvados region, and Pere Magloire is made in the village of Pont l’Eveque. In addition to the rules defining Calvados AOC, Calvados Pays D’Auge must be made from cider that has fermented for at least 6 weeks and must also be distilled twice (double distillation). In the theory of distilling, the longer fermentation (consuming more sugars) and the double distillation should lead to a cleaner, dryer, smoother, and higher quality spirit.

Nose: Fantastic—very engaging and enticing; rich apples with just a hint of acidity, reminding me of refreshing, still cider. Also, hints of spice and vanilla.
Taste: A well-rounded spirit and one that leads on well from the nose. Dry, crisp apple with a little sweetness in the middle, along with hints of toffee, caramel, cinnamon and nutmeg, which provide an impression of spiced baked apple. It has a warming finish, but no burn; as you continue to sip, a pleasant, cosy warmth builds in the chest. Just what you need on a cold, rainy day.

Posted by David Bridgman-Smith at 11:11 No comments:


Making cocktails with tea has been fashionable for quite a while now. (And that’s just this time round—tea was a common ingredient in punches, some of the earliest mixed boozes created by man.) But I was intrigued to be contacted by Tea Horse, a artisanal tea merchants dealing exclusively in loose leaf tea, in regard to a couple of tea blends that they had created expressly for use in cocktails.

“We ran a competition to create three new tea blends, and one was to specifically be used in a cocktail,” explains Ali Silk, director of Tea Horse, “to showcase how flexible and exciting an ingredient tea can be.” The resulting blends were shown to mixologist Julian de Feral of Gorgeous Group. “Julian was most inspired by the Pistachio Rose tea, so we worked on the tea blend with this in mind. He then took the tea and created the cocktail from it.”

“The idea of pistachio and rose tea got me thinking of the bustling alleys of the souks of Marrakesh,” says Julian, “where it’s customary to be offered a refreshing cup of sweetened mint tea while bargaining over a rug.” Julian points out that there is a connection here with the famous Southern US drink the Mint Julep—it is believed that the word “julep” comes from the Arabic golāb, meaning “rosewater”. “Though Mint Juleps are now typically made with whiskey, at the turn of the 19th century Cognac would have been the spirit of choice,” Julian says, and indeed his Medina Rose julep-style cocktail uses this spirit. “The subtle fruitiness, slight spicy dryness and wood influence from a good Cognac perfectly compliment the floral and nutty flavours of the tea, while contrasting with the mint.” 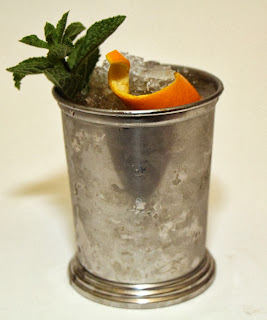 Brew the tea with the sugar in 250ml water for four minutes, then chill in the fridge. Add the tea, Cognac and rosewater to a large glass or julep cup. Crush the larger mint leaves in your hands and add. Squeeze the oils from the bulk of the peel over the top, then add crushed ice and stir. Top with more crushed ice, some choice mint leaf tops and a twist of orange peel.

The tea itself smells strongly of marzipan, fruit and rose. For some reason it reminds me of old ladies. On the palate it is warm and smooth with the same flavours; it’s quite cocktail-like already, perhaps because of the intrinsic sweetness. In the cocktail the tea is to the fore, even with all that crushed ice to dilute it. In fact all the main flavours in the cocktail seem to be coming from the complex tea, along with the fresh mint and the orange peel that is under you nose when you drink it. I found myself adding a hefty splosh more of Cognac to try and bring its presence into focus.

Julian also decided to make a cocktail from another Tea Horse blend, their Silver Rose, a blend of the popular Silver Needle white tea with very English rose and elderflower. Here he chose to evoke the flavours of England in the late summer: 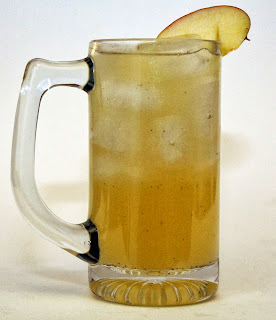 Infuse the tea in the gin with the honey for 20 minutes. Strain into a long glass and add the cider and apple juice and some ice. Stir and garnish with apple slices and rose petals if desired.

Unsurprisingly this cocktail has a strong apple hit, but the gin’s presence is very much felt too. The floral notes are detectable but this time I don’t feel the tea is coming through that strongly—although the apple juice has tannins that might mask it. Perhaps it is better to infuse tea in boiling water to extract the flavours, as in the previous recipe. The tea itself, made with hot water, is subtly pleasant, with an elderflower edge and not heavy or sickly at all.

It’s quite an interesting concept, really, the “cocktail tea”, engineered to carry the desired flavours in the cocktail. Hitherto mixologists have used flavoured syrups or bitters/tinctures to carry favours other than those of alcoholic beverages (with the concentrations of either sugar or alcohol acting as preservatives). Here, rather than using the basic flavour of tea as an ingredient in a cocktail, they have thrown a host of combined flavours at the tea blend itself: the essence of the “cocktail” is created at the point that you infuse the tea, after which you just add booze. (So dehydration is the preservative this way, rather than sugar or alcohol.) It could catch on.
Posted by Clayton Hartley at 03:58 No comments: