Last month I gave myself a birthday treat and sloped by the Fumoir Bar in Claridge’s hotel. Claridge’s itself is an Art Deco feast, but the Fumoir is a little-known treasure within a treasure. There is another main bar, but the Fumoir, which used to be a smoking room back in the days when you could smoke indoors, is off the main drag through an inconspicuous door. Within its compact dimensions (it can only seat 36 and you can’t book) are a wealth of decorative period details along with vintage photos of famous people smoking. There are no windows, so it has an intimate late night feel, even during the day.

As I was chatting to the barman he mentioned one of their Champagne cocktails, which contained tequila and grapefruit juice. He suggested that it referenced the Papa Doble, or Hemingway Daiquiri (a Daiquiri with added grapefruit juice and maraschino) but it occurred to me that this was effectively a high-class Paloma (see my earlier posts on vintage tequila cocktails and cocktails with Ocho).

I am reliably told that the Paloma, a mixture of tequila and grapefruit soda, is the most common way that tequila is drunk in Mexico. The preferred brands are Squirt, Jarritos or Fresca, none of which is available here in the UK, that I have seen; I’ve tried making the drink using Ting but I was underwhelmed. So recipes often involve some actual grapefruit juice, sometimes dispensing with the grapefruit soda altogether; often they will specify a salt rim to the glass and some lime juice (in turn balanced with sugar or agave syrup) or a lime garnish.

Intrigued, I later experimented at home. I essentially stuck to just three ingredients, tequila, grapefruit juice and Champagne, and I definitely think it works. (Even Mrs H. who is frankly not much bothered about cocktails in general, confessed it was pretty interesting and actually quite nice).

But a lot of it lies in the balance. I was using KAR tequila, which has more overt character than some mainstream brands, and a commercial fresh (not from concentrate) grapefruit juice, courtesy of Tropicana. I eventually decided these proportions worked best:

Paloma Royale
25ml tequila
40ml grapefruit juice
100ml Champagne
(Optional: 5ml lime juice and 5ml agave syrup)
Shake everything but the Champagne with ice, add to a Champagne flute or coupe and top with chilled Champagne, stirring gently to blend.
(Or you can save time by chilling all the ingredients and simply blending in a—preferably chilled—glass.)

The earthiness of the tequila comes through clearly; I started with equal amounts of spirit and juice, but I think this elevated level of grapefruit is necessary to get the balance and a bit of sweetness. As with all these things you could add lime juice and syrup for some conventional sweet/sour density (as I've indicated, a teaspoon of each is acceptable to me),* but I always think that if you’re going to use Champagne in a cocktail you should be able to taste it, so I preferred to leave it at this—not austere but delicate.

* And I have seen some recipes that add elderflower liqueur—which certainly has a natural affinity with tequila. I’ve also noticed in the past that tequila and ginger go well, so I must try adding something like the King’s Ginger liqueur to see how that works…
Posted by Clayton Hartley at 17:00 1 comment:

KAR Tequila: drinking yourself to death 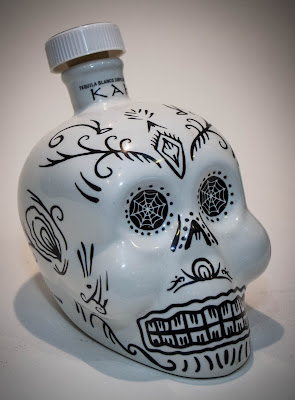 A friend gave me this as a birthday present last month, KAR tequila, which comes in an earthenware bottle shaped like a Day of the Dead style skull. This is the blanco but they also make a resposado (yellow skull with red devil motif) an añejo (black skull) and an extra añejo (black skull with sparkly bits). The Day of the Dead ritual, honouring the dead and celebrating the cycle of death and rebirth, apparently goes back 3,000 years. The name KAH means “life” in the ancient Mayan language.

Each bottle is hand-painted and no two are the same. As a result this is an expensive product: here in the UK you can expect to pay £46 for the blanco, £61 for the repo and at least £66 for the añejo. My friend gave it to me as much as anything because he’s convinced it’s the same size as my own skull—I have a notably small head and if I try on one of his hats I just disappear into it. It’s close but not quite (see illustration at the bottom). As he says, if nothing else it’ll make an unusual plant pot. But what about the contents? Are they worth the price tag?

Uncork it and there is a strong, pungent agave character. The palate is fruity and surprisingly smooth and sweet, with a herbal element carrying on from the nose and a petrolly aftertaste. There is a robust vegetable character that is muscular but not rough.

It makes a good margarita (tequila, lime juice and curaçao or syrup—agave nectar is fashionable) , bright, sharp and pungent, with that strong herbal note poking through to balance the drink.

To get a subtler idea of KAR’s character I line it up against some other tequilas: El Jimador, at the better end of the mass-market tequilas here and one that you’re likely to encounter in a supermarket, Olmeca Altos (see my post on it from 2013), Ocho (see here) and Tierra Noble. 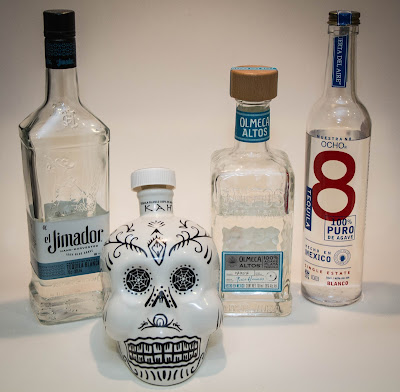 KAR is again sweet and smooth on the tongue (and note that it is 40% ABV, as is Ocho, while El Jimador and Olmeca Altos are 38%), with caramel on the nose. El Jimador has a note of orange on the nose and it is thinner and leaner on the tongue, with a slightly soapy flavour compared to the others here. With Olmeca Altos you do feel you’ve stepped up a league: the nose is more expansive, fresh, herbal and fleshy, with a petrolly agave character that follows through on the palate, where it joins toffee notes. Ocho also has that extra dimension compared to the first two, but its juicy grapefruit nose is lighter and frothier than Olmeca Altos. There is a strong agave character but it is more delicate than the Olmeca, which has a more middly, meaty, savoury flavour. Finally Tierra Noble is a bit of a wildcard, because I was given my bottle several years ago at a trade show and to the best of my knowledge it is not available in the UK. It is the most smoky of the tequilas here with a hint of chocolate on the finish.

As a spirit to sip neat, I would definitely choose Olmeca Altos of Ocho over KAR. But how do they compare in mixed drinks?

I line up four Margaritas, made with the same proportions but different tequilas: El Jimador, KAR, Olmeca Altos and Ocho. Initially I use two parts tequila to one part lime juice and one part Cointreau. At this point the El Jimador makes an unsatisfactory drink, because the tequila doesn’t really make its presence felt. The KAR, on the other hand is strikingly more prominent on the nose and tongue. Likewise the Olmeca is again noticeable, with a similar caramel note to KAR but with a fresh aromatic element. Ocho is playful, more elusive and subtle, with a hint of minerality.

As an experiment I increase the tequila to three parts (to one part each of lime juice and Cointreau). Even at this ratio the El Jimador gets a bit lost, but with KAR it immediately strikes me as a pretty perfect balance between the three ingredients, the sort of combination that makes sense of a cocktail recipe. With Olmeca, by comparison, something seems out, not gelling. It’s not unpleasant, but just takes a bit of getting used to. Ocho likewise seems to leer out a bit, stamping its own character on the drink, whereas KAR feels more that it merges easily with the lime and curaçao.

There is no doubt that KAR makes a damn fine Margarita. But is it worth the money? Not unless you have a desire to fill your house with gaily-painted ceramic skulls. As a sipping tequila, KAR is smooth and approachable but Olmeca Altos (about £30 for 70cl) and Ocho (£21 for 50cl) offer more dimensions.

Having said that, when my bottle of KAR is finished, I will still have a highly unusual plant pot. 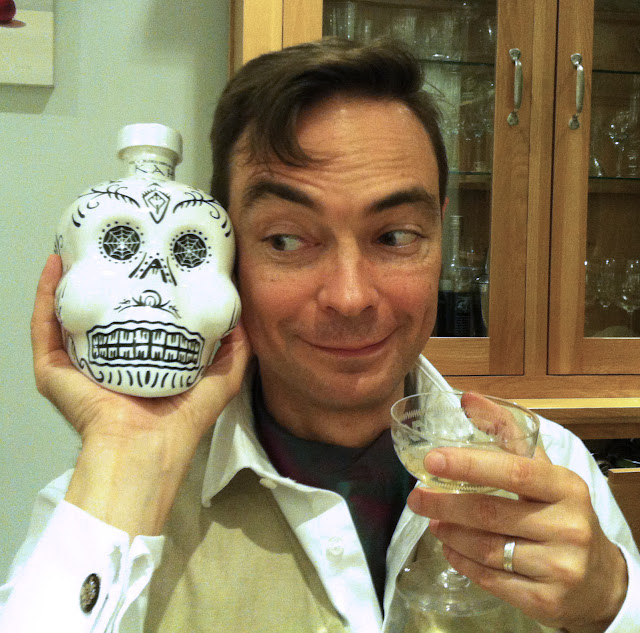