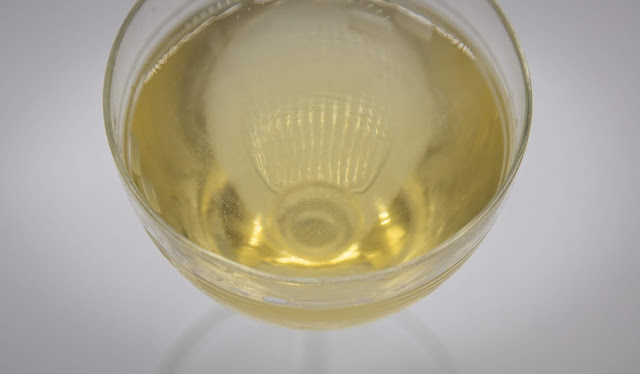 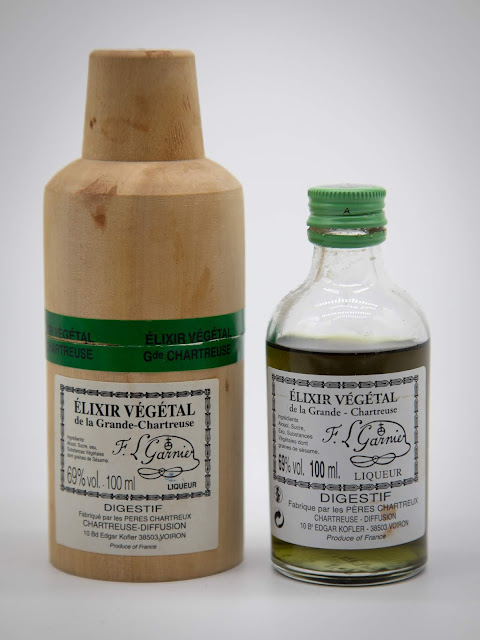 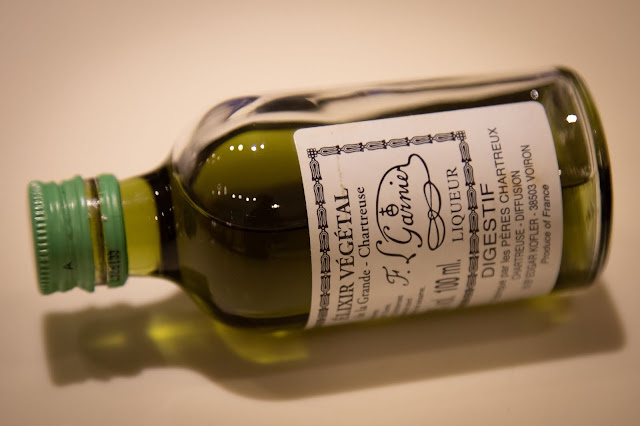 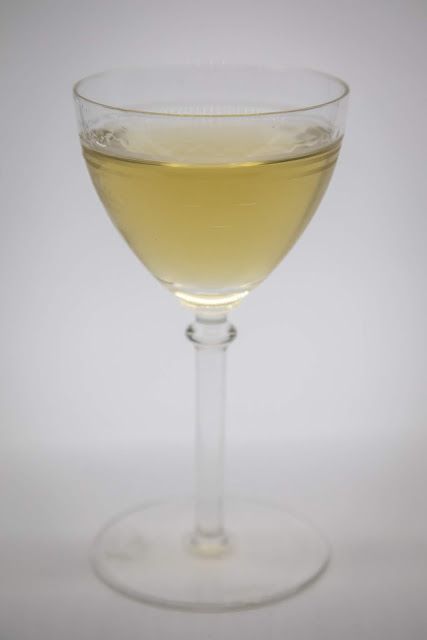 Posted by Clayton Hartley at 08:33 No comments:

I generally don’t have much time for LinkedIn. I tend to say yes to any request to connect but I’ve only been approached twice about potentially viable work opportunities, and on both occasions the people in question turned out to be bonkers and their project clearly pie in the sky.

So it was a welcome change recently when I was approached by Alexandros Kouris. He has a beer brand in Greece, Nissos, and is in the process of launching a gin too. He found me because of some gin judging I did and he wanted me to sample his gin-in-progress. 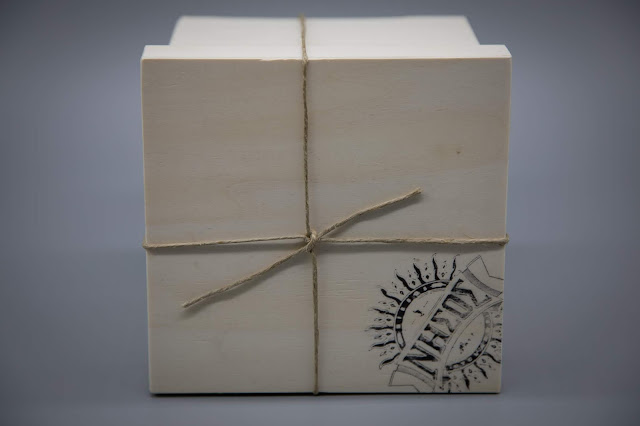 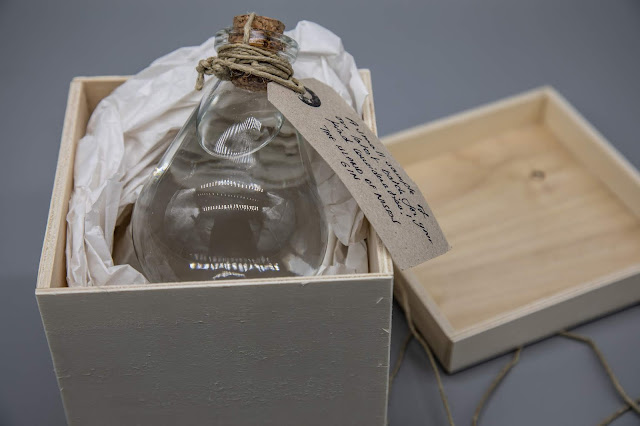 I don’t normally do “unboxings” but the package sent to me was certainly eye-catching. Inside the wooden box was a flask, the cork secured with string and a traditional glass “mati” bead glued on top. The “eye” design of the bead is a recurring motif in that part of the world and is intended to ward off the Evil Eye. But Alexandros insisted it was not there for any magical purpose, simply because his wife thought it looked nice. 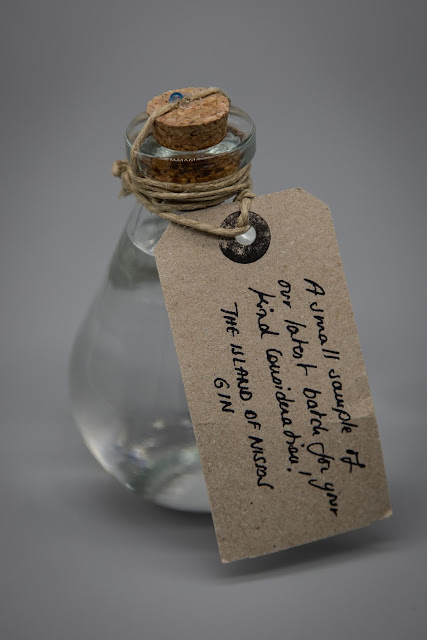 The effort with the packaging is particularly appreciated considering that this is not even anything like the planned production packaging (see the image below).

I uncork the flask and from the bottle neck I first get juniper and citrus, then something floral, sweet vanilla and an earthiness too, with hints of chocolate and something that reminds me of cake.

I pour some into a glass and the aroma becomes a bit more savoury, an interesting balance of sharpness, with floral and leafy layers, woody spice like cinnamon or cedar and earthy roots.

On the palate it is powerfully flavoured, with sweet/floral elements and an almost menthol punch, plus something that seems drily aromatic, like saffron, but more floral—it made me wonder if there was an emphasis on orris root, but Alexandros tells me there is none in there. The earthy/rooty angle also made me assume that there was mastiha in it (see the previous post)—which would be an obvious choice to make something self-consciously Greek, but again Alexandros tells me there is none. 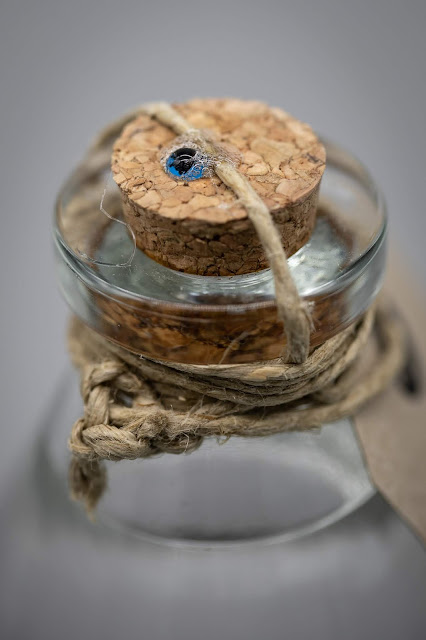 This is a complex gin tasted neat, bright and spicy with notes of ginger, but with a mellow, floral approachability. It is smooth and sweet on the tongue, combined with a spice that reminds me of gingerbread, and has a lingering aftertaste that also has the ginger/molasses character of gingerbread.

In dilution the warm, sweet spice notes become more dominant and the juniper less so, to the extent that if you’re looking for a classic G&T this might not be your best bet.

In an Aviation cocktail it sits very comfortably, blending so seamlessly with the fruit and violet flavours that it becomes hard to pick out the character of the gin itself. As you can see from the picture, I garnished this with lemon peel and the aroma of that meshed very neatly with the gin.

After some goading Alexandros tells me there are ten botanicals: hops (well, he is a brewer), wild mint, thyme, cumin, cardamom, lemongrass, pepper and two kinds of local berry (which are used fresh rather than dried), in addition to juniper, of which there is not a lot. The spirit base is grape alcohol (“the same as used for Cognac”, he says)* and the gin is distilled in a copper pot still and bottled at 40% ABV.

I might guess that the citrus element I got initially must be from the lemongrass but Alexandros says that note comes mainly from the hops. I don’t really get cardamom specifically, but now that I know I can sense cumin, contributing to the dry spice angle that struck me. I think that the sweetness must be from the mint and the berries. I can also believe that the mint is responsible for the dominant spicy/pungent character, though Alexandros says, “The mint is not very prominent. Quite difficult to handle, this one, though it adds depth and of course makes it spicy.”

Nissos is a modern gin, and a poised, polished performer. Whether neat or in dilution, new flavours keep emerging. It manages to be both warmly pungent, evolving into dry, woody spice, but with a bright top note of citrus and juniper. I also keep thinking I get a whiff of honey. My experiments with cocktails suggest that while it’s unlikely to clash it may get a bit lost, so perhaps simple serves are the best way to appreciate its subtleties. Alexandos didn’t give an idea of when the gin might launch, but keep your eyes peeled.

* By which I assume he just means it’s a grape eau de vie, not that it comes from the Cognac region—which would be a bit mad when there must be plenty of grape alcohol nearer to hand.