Apples but not pears: the London Vermouth Company 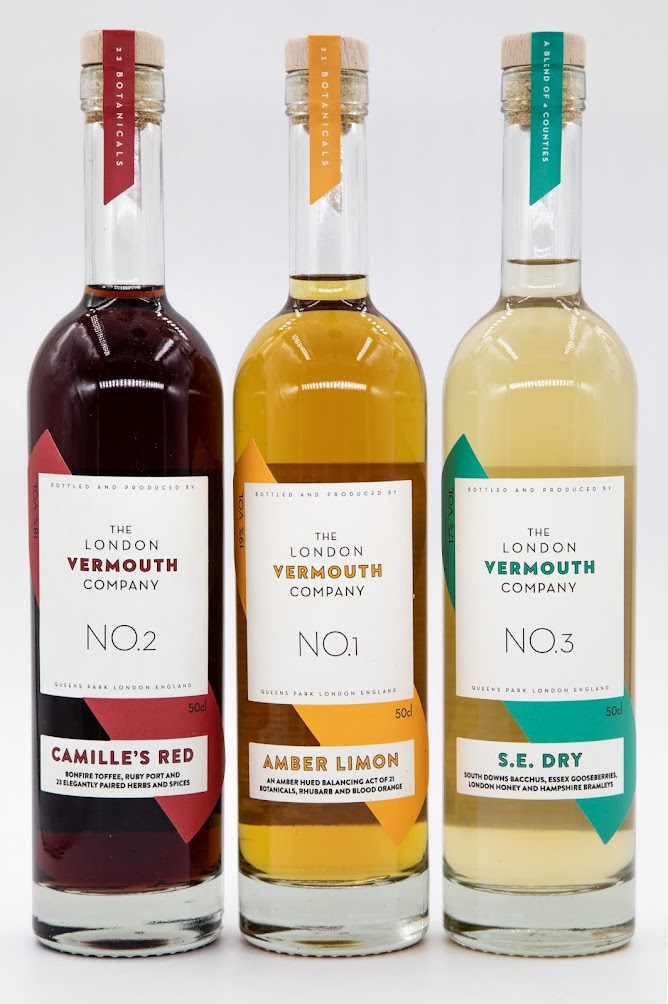 I suppose no one should have been surprised that, hot on the heels of the recent gin boom, where half a dozen new gins seem to be released each week and every town or visitor attraction has its own brand, there should then be a vermouth boom. Well, maybe not a boom exactly, but certainly when I was a youth you basically had Martini and Cinzano, plus some dodgy supermarket clones. If you were a bit classy there was Noilly Prat and bar-trade insiders might favour Dolin. But now new brands are springing up all over the world, including Regal Rogue from Australia and my current favourite Belsazar from Germany. Often the USP will be the use of local wines as a base.

The latest aromatised infusions to tickle my jaded palate come from much closer to home—London (specifically Queen’s Park, which is the other side of the city from my manor, Greenwich). A friend emailed with a mysterious request for my mailing address—he said a friend of his had something to send me. In due course three bottles arrived from the London Vermouth Company.

Set up by Ben Leask, Andrew Wealls and Guy Abrahams, three friends with diverse backgrounds but a shared interest in food and drink, the LVC, as its name suggests, focuses on the local sourcing. Mind you, it’s a bit of a fudge, as not a lot is grown in London itself. But the S.E. Dry vermouth uses Bacchus wine from the South Downs, gooseberries from Essex and Bramley apples from Kent, so near London if not actually in it. (It does contain London honey, though, from Dulwich, not far from me.) The Amber Limon uses Kentish rhubarb, but I’m assuming the blood oranges are not from anywhere very nearby. And Camille’s Red uses dry wines from Kent and Surrey, but also ruby port.

The Amber and the Red also feature largely unnamed botanicals (numbering 21 and 23 respectively), although the website does mention that Indian cardamom features in Amber Limon and S.E. Dry, orange flowers from Marrakesh in Amber Limon and Camille’s Red, and Indonesian cloves and black pepper in the red as well. But they were at least able to find local bay leaves, grown in Guy's back garden.

In each case the founders asked a specialist to concoct the recipe: the amber and red vermouths were crafted by drinks expert Camille Hobby Limon, of The Bar With No Name and Zetter Townhouse, while the S.E. Dry was created by chef Steven Edwards, winner of MasterChef: The Professionals in 2013. Neither had made a vermouth before, but the chaps behind LVC specifically wanted to see what happens when someone who is a genius in one field takes on a challenge in a different one.

Uncorking the bottle releases rather a complex and intriguing aroma—honeysuckle sweetness, nettles, elderflower, raspberries, meringue and candied fruit and angelica. All rather tantalising and exciting. But when you slosh some of the liquid into a glass the bouquet suddenly changes and becomes more overwhelming and actually less appealing, with a heavy layer of flowers that have “gone over”. There is still a bright orange/grapefruit citrus character, but now with the burdensome confectionary miasma of hard-boiled sweets, along with something pungently herbaceous.

On the palate there is a strong, sharp vegetable note of rhubarb, with roiling meadow flowers and stalks. It’s a bit cloying, though the balance is medium sweet overall. I try some Belsazar Dry alongside for comparative purposes. I always think of this as quite savoury, with almost a saline note, but I’m surprised to find it is actually no less sweet than the S.E. Dry; however the flavour is sharper, more about tart berries than mulching flowers.

I try the obvious and make a Dry Martini with it. This actually works better than I expected. It’s not much like Belsazar; it’s more floral and has an overriding aroma of elderflower and gooseberries floating above it. I don’t think it’s likely to become my new favourite vermouth but, especially when partnered with a stern, savoury gin, it can make for a soft, summery Martini that balances the hard juniper edges of the spirit.

As mentioned, this stars rhubarb and blood orange, and is indeed amber in colour. Sniffing the open bottle yields a smell not dissimilar to the Dry but tighter, more citric, toasty and perfumed. Like hip marmalade. But once again, in the glass the aroma gets overwhelmed by heavy floral overtones, but this time I can’t help being reminded of synthetically-fragranced paper hand towels.

On the tongue there is a totally unexpected resinous spice like frankincense, along with floral and herbal weight. It’s a bit like wandering into a patchouli-doused head shop. There’s a bit of violet and strawberry in there too, citrus tartness and rhubarb bitterness, plus a lemon balm note that runs through both vermouths. But that patchouli note dominates.

There aren’t really any classic amber vermouth recipes so I try making a Negroni using this one. For me this is dominated, as soon as you smell it, by a note that reminds me of creosote though Mrs H. gets mainly boiled sweets again. I eventually managed to balance it up a bit by adding more Campari and gin, but it really is a bit pointless using this vermouth in the first place.

I do a search for bianco vermouth cocktails and discover that Simon Difford thinks the El Presidente—Cuba’s Martini, made with rum and vermouth—it best made with bianco. A 2:1 blend of white rum and the Amber Limon certainly doesn’t clash, though it isn’t transformative either. You still have to like the vermouth’s cloying pungency. Another Difford suggestion is bianco vermouth with tequila, and this turns out to be more successful. The herbaceous prickle of the tequila locks horns with the heavy floral and resinous notes of the vermouth; with Olmeca Altos Plata I find that at 2:1 the vermouth is actually rather swamped and you need 1:1 proportions to get a good balance between the two. Difford’s recipe includes a bit of maraschino—thought I don’t think it needs sweetening—plus lavender bitters; I have none to try, but I can imagine the result would be a very complex cocktail, full of fleshy vegetable layers and late-summer floral tendrils.

One other thing Difford suggests is an Algonquin cocktail, which uses rye whiskey, vermouth and pineapple juice. I don’t have any of the latter, but a mix of rye-high Four Roses Small Batch bourbon and the Amber Limon is also very interesting, the spirit’s woody rasp more than a match for the vermouth.

In addition to the two English wines, ruby port and those spices, this apparently includes bonfire toffee—toffee made with black treacle (molasses). A sniff of the bottle offers a promising dark scent of orange and woody cinnamon, a bit of clove, plus that candied layer all these vermouths seem to have. In the glass it is less cloying than the other two; there is rhubarb, something floral, coffee, toffee and ruby port notes.

For my taste, the balance of sweet and bitter on the palate here is the most successful out of the three, with herbal, rooty and candied elements. Out of the three this is probably the only one I could drink neat—despite the dominating “potpourri” note that they all have—though in comparison Belsazar Red is tighter, leaner and certainly more bitter.

I try a Manhattan using this vermouth; it’s certainly distinctive, with strong wafts of citrus and rhubarb on the nose, but on the palate it lacks something in the middle. Oddly, it has a cough-mixture quality but seems kind of dry too. Adding a dash of maraschino helps, but again you’d be better off just using a different vermouth.

In a Negroni things start to look up. Straightaway the blend has what I can only described as an openness or transparency. I think the rhubarb and grapefruit elements sit comfortably with the citric bitterness of the Campari and the heady thrust of the juniper in a vivid harmony. There is also an intriguing perfumed aftertaste. The vermouth really comes into its own here, but you’d better be OK with bitterness. I tried it with several different gins and it is a solid winner.

The stated aim here, to make specifically London vermouths, is a bit hit and miss—not only do so many of the ingredients come from other countries, but the whole idea of vermouth has nothing to do with British food and drink traditions (other than our willingness to drink the stuff, though that applies to most boozes). But have they created something that tastes particularly Londonish? Rhubarb is a strong presence, which is fair play, though if you wanted a bittering agent then hops would also have been authentic for the region. And if the smell of over-mellow honeysuckle and elderflower makes you think of England then that is a thread that runs through these offerings. It’s a smell I get from gins sometimes and it usually makes my nose wrinkle and my lip curl, but to each his own.

As I say, Camille’s Red makes a bright, open, vivid Negroni and the Dry makes a blossomy, summery Martini. The Amber is the most challenging for me, but initial experiments suggest it’s best matched with the powerful savoury flavours of tequila and American whiskey.

Posted by Clayton Hartley at 13:53