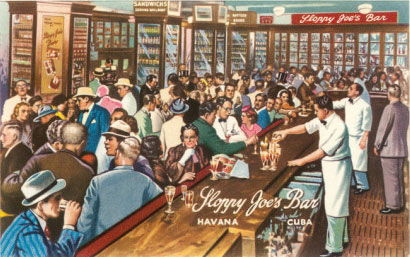 In our ceaseless quest for interesting corners of the Prohibition world around which to theme Candlelight Club parties, we have twice taken advantage of Cuba’s romantic and exotic place in booze history. When alcohol was banned in the States, it didn’t take long for Americans to notice that Cuba was jolly close indeed and was untouched by the Volstead Act. Before long Havana became one big party, filled with neon-signed jazz clubs and cocktail bars. Bacardi teamed up with Pan Am to lay on boat plane flights from Key West right into Havana Harbour so no drinking time could be lost, inviting holidayers to come and "bathe in Bacardi rum". "I have seen people leaving incoming ships," commented US Consul Hurst, "who have stopped at bars on their way to the hotel… By the time they reached the hotel they could scarcely ask the reception clerk for a room."

Rum was the national drink, thanks to a climate ideal for growing sugar cane, and some of the best-loved rum cocktails came out of this era. The Mojito (rum, fresh mint, lime juice, sugar and usually a splash of soda) derived from an ancient drink originally made on the island from a pre-rum sugar alcohol. The Daiquiri (rum, lime juice, sugar) is said to have been developed by American mining engineers in 1898 fed up with drinking Planter’s Punch, who named it after the village where they were stationed. The Cuba Libre (rum, lime juice, cola) is named after the battle cry of the rebels fighting to escape Spanish rule—although this conflict ended in 1898 and Coca Cola did not reach the island till 1900.

There was also a drink named El Presidente which was apparently very popular both in Cuba and back in the US (illicitly during Prohibition and legally afterwards). Named after President Mario Garcia Menocal, it consists of equal parts Bacardi rum and French (i.e. dry white) vermouth, plus a bar spoon of grenadine. Perhaps it was inevitable that someone would try to create a “Cuban Martini”, a sophisticated drink for classy clientele. So I was keen to try it out as a possible drink for the menu at our event. The only problem was that it isn’t very nice: I made myself one as an experiment and it was thin and astringent. Adding more grenadine didn’t help either, just created a clash of flavours.

Fans of Cuban cocktail history will no doubt have been pleased to hear that Sloppy Joe’s, one of the most popular Havana bars from the era, reopened in March after some 57 years. (I’d like to take this opportunity to plug a 1933 Warner Bros movie called Havana Widows, starring Joan Blondell and Glenda Farrell, which I discovered in my researches; it’s full of outrageous wise-cracking dialogue and features a drunk lawyer who can usually be found in a bar called Sloppy Moe’s, which goes to show how famous Sloppy Joe’s was in its day.) In a news item on the subject, Imbibe included a recipe for a Sloppy Joe’s Cocktail,* which combined rum and French vermouth with dashes of grenadine and curaçao, plus lime juice. Most Cuban cocktails seem to come back to lime juice, and there’s no denying that the union of rum, lime and sugar in a Daiquiri is a perfect thing. I made myself a Sloppy Joe’s Cocktail and it does hold together—you can taste all the elements, the underlying rum, the fruitiness from the grenadine and curacao, and their sweetness balancing the sour element of the lime, plus a gentle bitterness rising up from the vermouth. But Mrs H was unmoved by it, and I can’t see myself making one very often. It’s one of those recipes where you feel the grenadine and curacao have been stapled on in an attempt to fix an underlying problem.

However, when I first attempted to make one of these cocktails I looked in the fridge and realized that I didn’t actually have any dry white vermouth (Noilly Prat is my normal choice). What I did have was a bottle of China Martini, a strongly flavoured vermouth with, as its name suggests, a strong dose of quinine. Derived from the bark of the South American quina tree (China Calissaia), quinine was used by locals to combat fever and it came to international recognition when it saved the life of the wife of the Spanish Viceroy in Peru in 1638. It became a staple part of life in the Raj where, made into “tonic water”, it was soon found to go well with gin. As with many alcoholic infusions and distillations, what started out as a way of preserving something with medicinal qualities was soon being consumed for purely aesthetic reasons. Likewise the pleasing bitterness of quinine is a key part in the flavour of quinated wines like China Martini,** and there is a long Italian tradition of making such infusions. Likewise, the word “vermouth” derives from the German Wermut, which is wormwood—for this bitter herb, famously a defining ingredient in absinthe, is also to be found in vermouth.

Back in the day there was a French vermouth-style drink called Kina Lillet, which appeared in famous cocktails from the Corpse Reviver No.2 to Ian Fleming’s Vesper Martini, which James Bond creates in 1953’s Casino Royale. This drink was discontinued in 1986, and the manufacturers today produce Lillet Blanc, a sweet, orange-flavoured wine-based blend, which is rather pleasant but with a delicate flavour that is easily swamped in a cocktail, in my opinion. I’ve never been able to taste Kina Lillet but it is generally considered to have been more bitter,*** more along the lines of Italian products like China Martini and Cocchi Americano. (For some reason I had got the idea that some of these were developed recently to fill the gap left by Kina Lillet, but in fact Cocchi Americano has been in production since 1891. It’s hard to find out much about China Martini, and Martini’s own website doesn’t mention it, but it also clearly has a heritage, as this bizarre TV advert, from 1958, attests.)

So I tried knocking up a cocktail using China Martini, rum and lime juice. China Martini is pretty sweet so I left out the grenadine and curacao. And it is something of a revelation. Essentially it is a Daiquiri that uses the vermouth for sweetness rather than sugar, with the added herbal notes and piquant bitterness too. Unlike the Sloppy Joe it is pleasingly simple, with just the three ingredients, and is resilient when it comes to proportions: it works with one shot of each, though I think it’s best with the rum increased to 1½ or 2 shots, depending on how strong you want the sweet and sour elements. Perhaps the only downside is that China Martini is not an attractive colour and the resulting cocktail is a sludge brown.

Shake ingredients together with ice and strain into a cocktail glass. If you prefer it sweeter, you could reduce the amount of lime juice, or perhaps add a dash of grenadine.

It also works with Cocchi Americano, though not as well: Cocchi Americano always seems to me to have quite a ginger flavour to it which sits comfortably with things like whisky, but I’m not so convinced here. I can also confirm that the recipe works well with Americano Gancia (less so with Martini Rosato, which is not sweet enough) and it would presumably work with a number of the many bitter-sweet vermouths out there.

By chance I stumbled across an article that David Wondrich wrote about the El Presidente. Like me he was never won over by it and couldn’t see why it had been so popular—until he noticed that a number of the early Cuban recipes specified “Vermouth de Chambery”. He writes that Dolin is the only remaining Chambery style vermouth and that, in addition to dry white and sweet red, they also make a semi-dry blanc (as indeed producers such as Martini and Cinzano make a pale but sweeter bianco). As soon as he tried the cocktail using that, the whole thing came together.

Which is similar to my own experiences with the Sloppy Joe—or Sloppy Giuseppe, as I have christened my new version (with apologies to Pizza Express who have a meaty pizza bearing the same name).

China Martini is available from the Whiskey Exchange priced at £23.25. Which is a lot for a vermouth, I know.

* I have the 2008 reprint of the Sloppy Joe's Cocktails Manual from 1931, and the only cocktail in it named Sloppy Joe's actually contains cognac. pineapple juice, port, grenadine and curaçao. The recipe described in Imbibe appears as an American President cocktail, while the El Presidente recipe, with the addition of curaçao, is actually called a Cuban President.

** See also Cocchi's wonderful Barolo Chinato which I mentioned before as a good accompaniment to chocolate.

*** I’m sure I’ve read a claim from the manufacturers that Lillet Blanc is little different from Kina Lillet, insisting, oddly, that the latter actually had less quinine in it, though don’t bother looking at their website today as it has been a just a holding page for some time. I’ve seen two quotes from Lillet at the time saying that the new version is “fresher, fruitier and less bitter”, but the only link I’ve found in relation takes you to Lillet’s French site which seems to be dead.
Posted by Clayton Hartley at 04:44