Regal Rogue, an Aussie vermouth fit for a king? 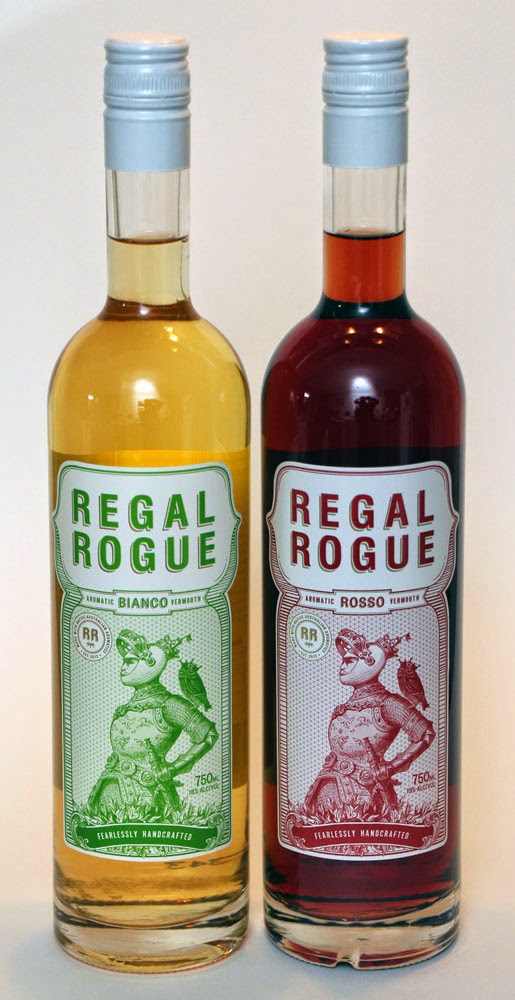 It seems only yesterday that I was commenting how rare it was for a new vermouth to be launched. That was in the context of Quintinye Vermouth Royal, and in truth it was a full eight months ago. (By comparison, last Monday I was helping DBS judge the Craft Distilling Expo’s Gin of the Year awards and although it was only open to craft gins launched since July 2013 of this year, there were 41 entrants.)

So the arrival of Regal Rogue still marks a rare example of a new vermouth range. And in fact it literally turned up on my doorstep unannounced: a courier knocked on the door and handed over a cardboard suitcase, which turned out to contain a complex assemblage. In addition to bottles of two new vermouths, a rosso and a bianco (according to the website there is also a dry), there were bottles of approved mixers, along with approved garnishes too. There were various bits of paper and cardboard, a couple of straws, a silk pocket square and a feather. The handkerchief is one of three that have been produced to play up the gentleman-rogue image, each one representing the botanicals of one of the three vermouths. My one (see picture) represents the Dry, according to the name of the image file on the website, though I’m not sure exactly what is being depicted—it looks like a bacterial culture under a microscope. As for the feather, the only clue I can find is the recent win at the Sydney Design Awards, which they refer to as “a feather in our cap”…*

Vermouth is wine that has been “aromatised” with herbs, spices, fruits, barks, etc, and often fortified as well. Its homeland is Italy and France, but Regal Rogue hails from Australia and makes use both of local wines and local botanicals. It is intended as a celebration of these and apparently is also made in annual batches to mark the variations from vintage to vintage (although in fact the bottles I was sent have no vintage statement on them). The bianco is made from Semillon and Sauvignon Blanc, bottled at 18% alcohol by volume and infused with bush lemons, lemon myrtle, finger limes, sage, oregano, basil, native thyme, lemongrass and vanilla. The rosso (19% ABV) is made from a blend of Semillon, Shiraz and port. This is interesting in itself, because red vermouth is typically not made from red wine, but usually white wine, with caramel colour sometimes added. Regal Rogue Rosso is therefore redder than many rossos. This wine blend is infused with wattle seed, pepper berries, orange, cocoa nibs, clove, cinnamon and ginger.

The name “vermouth” comes from vermut the German for wormwood, and vermouth is traditionally defined by the presence of this bitter herb, consumed for its perceived health and digestive benefits, yet neither the labels nor the website suggest there is any of it in Regal Rogue rosso or bianco.* (Mind you, the website does state that the dry vermouth contains wormwood, along with olive leaf, juniper, rosemary, quandong, nettle leaf, gentian and orris infused into Sauvignon Blanc; sounds interesting, especially with the juniper and orris, both traditional gin botanicals.)

Where Quintinye played upon a historical connection with Jean-Baptiste de la Quintinye, botanist to King Louis XIV of France, Regal Rogue manages to embrace its bouncy, earthy, playful New World origins, but at the same time projects itself as the character of “Lord Ward” an imaginary aristocrat playboy (so, to be pedantic it’s more Noble Rogue than Regal Rogue…). On the bottle he appears as a medieval knight, though elsewhere in the literature the milieu seems to be the 17th or 18th century.

But what of the liquid itself? Despite the unusual ingredients, the bianco’s nose is recognisably that of vermouth, hitting you primarily with sage and lemon balm or lemon thyme. Compared to Noilly Prat it is heavier and more pungent, where Noilly is sharper, more delicate and honeyed, with a hint of vanilla. Regal Rogue is more of a savoury, vegetal punch. Maybe it was because I was tasting it around suppertime, but I kept thinking it would be nice in pasta sauce…

On the palate it is sweetish but with a slightly bitter finish, and the same sage/lemon thyme thrust. Noilly is obviously drier (but then the Regal Rogue I’m tasting is a bianco, traditionally a sweet white, not a dry). Although it is definitely doing the same job of the French vermouth, it takes a more muscular approach.

Time to try it in the obvious cocktail, a Martini, which I approach with 40ml Bombay Dry gin and 10ml Regal Rogue bianco. This obviously makes a sweetish Martini, but at this ratio the vermouth is not as powerful as I might have expected after tasting it neat. But even here you can tell, from the distinctly savoury character of the vermouth, that this drink is yearning to be a Gibson (a Martini served with a cocktail onion as garnish). Add another 10ml of vermouth and we reach an agreeable botanical balance, though it is now a bit sweet for me.

The accompanying literature actually has a recommended Martini recipe, unexpectedly combining 40ml vermouth with just 20ml gin—they recommend Westwinds Sabre Gin. I don’t have any but I try Captive Spirits’ Big Gin, which is indeed big, punchy and pungent. The juniper backbone certainly makes its presence felt but this is too vermouth-heavy and sweet. Add just another 10ml gin, however, and the balance comes into focus: it’s busy but everything seems in its place.

Interestingly, the bits and pieces that came in the box are actually geared towards a less traditional serve: on the rocks with a mixer, in this case elderflower pressé, garnished with a slice of grapefruit and spring of rosemary. Probably not a combo you would have knocking around at home, which I guess is why they included the components in the box. And it is indeed an excellent combination, the vermouth’s herbal pungency merging with the prickly aromatic tartness of the elderflower, and the grapefruit adding a fresh citrus note to the lemon thyme dimension already present.

I attempt to compare the Regal Rogue Rosso to some Martini Rosso, although the latter has been around a bit and looks distinctly brown. But the nose of the two is still remarkably similar. The Regal Rogue has the trademark pungency but the sage notes are less pronounced here; I get orange, cinnamon and cloves and a hint of nettles and even tomato. On the palate it is less sweet and caramelly than the Martini, lighter, fresher, more delicate and more aromatic. It has both tartness and bitterness and is not particularly sweet, being more a broadside of fresh, aggressively fragrant herbs. Mind you, when I try to make a Manhattan featuring Regal Rogue Rosse and Rittenhouse Rye 100 Proof, the vermouth surprisingly takes a back seat at 2:1, although it adds a little sweetness and softness. Add a bit more and orange notes come through, along with the strange tomato element. I’m not sure it’s ideal for this cocktail.

But try their recommended long drink, on the rocks with ginger beer, garnished with a slice of orange and a spring of mint, and once again they have a winner, with the herbal notes blending seamlessly with the ginger tang (and there is ginger in the vermouth too). It is rather moreish like this and more drinkable than the vermouth on its own.

Perhaps the most interesting thing about these two Regal Rogue products is the fact that they don’t seem to be pushing them in the traditional cocktail ingredient roles, but instead suggesting them long with mixers and no other alcohol. I have noticed of late a bit of a move towards lighter, longer mixed drinks, using wine and vermouth and no spirits, so Regal Rogue may have been created to ride this wave. Perhaps more of a summer thing than for the autumn, but that is just a niggle. And I’m sure in time mixologists will come up with plenty of spirit-based cocktails that make the most of the unique flavours of this new range.

At the moment you can only buy Regal Rogue by the bottle at Selfridges (at a hefty £24.90 for 70cl), plus in select bars such as the Soho House Group and Granger & Co.

* I later spoke to someone from the PR agency and he didn’t know about the feather either, but guessed it might be connected with the owl that is depicted sitting on the rogue’s shoulder on the label of the bottle. I had assumed that the whole package had been dreamed up by the agency, but apparently it all came from the founder of the brand, Mark Ward—truly his is an all-encompassing vision.

** At the launch of Quintinye, Jean-Sébastien Robicquet stated that under EU regulations anything labelled as vermouth had to contain wormwood. (In fact see Section 2 (a) here.) Indeed, after speaking with the founder, the PR was able to confirm that all three Regal Rogue products do contain it.
Posted by Clayton Hartley at 09:55