I'm not sure at what point Crème de Violette either became virtually unavailable or simply fell out of fashion—it's interesting to note that, while the first published recipe for the Aviation cocktail, which included it as an ingredient, was in 1916 in Hugo Ensslin's Recipes for Mixed Drinks, by the time of 1937's The Café Royal Cocktail Book and even 1930's The Savoy Cocktail Book and Cocktails by "Jimmy", Late of Ciro's, crème de violette had vanished from the recipe. A 1965 episode of The Avengers actually revolves around the scarcity of the drink. However, today it is one of those "lost" ingredients that is once again manufactured by a number of firms.

Another lost and found ingredient is Crème Yvette, a liqueur that also has violets in it, among other things, and DBS has been encouraging me to try a head-to-head between the two in the Aviation cocktail. I've never actually seen an Aviation recipe that specified Crème Yvette in this way (although the Blue Moon cocktail from about 1940 is the same minus the maraschino), but I notice that the label of the recent rerelease mentions this cocktail by name. In any case, it sounded like an interesting experiment. 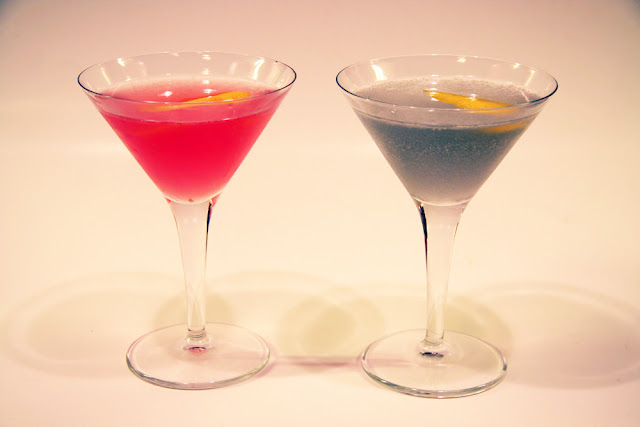 As you can see from the picture, the first obvious different is colour—although in practice both drinks were a bit lighter than they appear in the photo, but it gives you a general idea.

Made like this the classic recipe has just the right sweet/sour balance, with the added floral interest deftly hovering over the top: all the flavour elements are fairly clearly defined. Made with Yvette, the drink has a strikingly similar profile, but is clearly sweeter, both because the liqueur is sweeter but also the berry fruit elements in it come out, giving a sense of intrinsic sweetness, I think, as if there is a dash of Ribena in there. 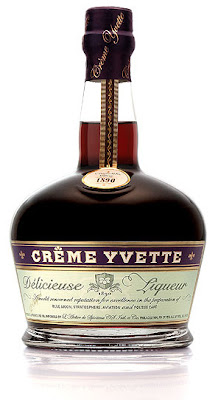 The crème de violette I used was the Bitter Truth version, and I sense it was intended for cocktails rather than for sipping: tasted neat it is quite dry and single-mindedly a violet essence, presumably with some colour in there too. The Crème Yvette I used was given to me by DBS in a plain sample bottle (he does that a lot), but I assume it is the recent rerelease from Rob Cooper, the man behind St Germain elderflower liqueur. The drink was originally manufactured in the US by the Sheffield Company of Connecticut, but the rights were later bought by Charles Jacquin et Cie—see David's post on Rock and Rye—which was in turn acquired by Maurice Cooper, Rob's grandad. Production ceased in 1969.

Tasted neat, Crème Yvette has a more balanced and complex taste than the crème de violette, with the violets and red berries coming out clearly—it is made with blackberries, raspberries, strawberries and blackcurrants, plus vanilla, honey and orange peel too, I gather.

Personally I think I prefer the cocktail made with the violette: the flavour elements blend harmoniously but each stands clearly defined too, giving the drink a classic simplicity. But if you prefer your drinks a little sweeter than perhaps they tended to be in the Golden Age, give the Yvette a try. It's also possible that the Blue Moon, without the maraschino, restores the sweetness balance. If I've got enough Yvette left in my sample I'll give it a try and report back.