So I was on a supply run for ingredients to make some more Old Tom Gin & Mincemeat Vodka when I came across a small package of what I initially thought were just two toddy glasses, I was half right. They were toddy glasses but they had been pre-filled with Irish Coffee.
For any vintage nostalgics the box is a treat, picture of 1940s flying boats, old maps a flying cap and gloves all accented by gold and browns. This is not too surprising as, according to the box, this sort of Irish Coffee was served on the 1940's flying boats on the river Shannon. 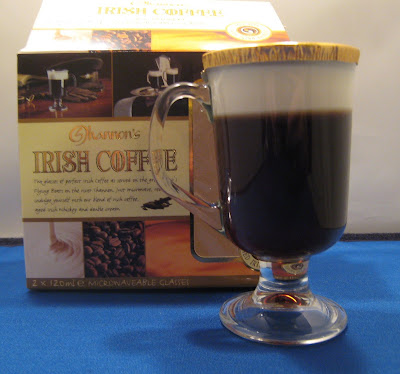 The box suggests the first Irish Coffee came about:
One night in 1942 when bad weather forced a transatlantic flying boat to turn back to its base. As coffee was served to the bedraggled passengers, a drop of Irish Whiskey was added to their cups.
A surprised American asked "is this Brazilian coffee?" "No" came the reply, "That's Irish Coffee."
Cocktail historians may notice there is no mention of Joseph Sheridan of Foynes one of the suggested creators.
Back to the drink itself, as I said the glasses already contain the separate cream and coffee whiskey and have a foil top. To make the drink hot you pierce the top of the foil and microwave it for 45 seconds.
Hold on! Surely they know you shouldn't put metal in the microwave? Apparently not.
If you do buy this product I strongly urge you to remove the foil and not risk damaging your microwave, try some microwavable cling-film instead.
So avoiding sparking appliances, I had a drink that was as black as Guinness on the bottom with a half inch of light as Bailey's-coloured liquid on the top. (Actually it looked a bit more like evaporated milk.) 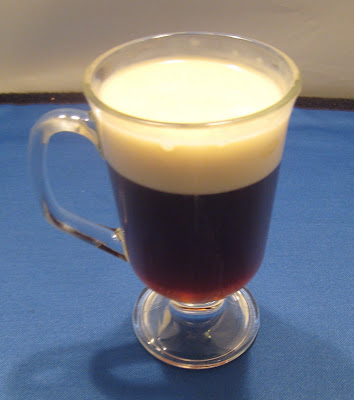 As soon as my mouth touch the top of the drink I expected the cream layer to dissipate leaving a curdle-looking mess, but I was wrong, up until the last sip the separation between cream and coffee was maintained. It was quite to pleasant to sip the coffee mixture through the cream as it added a touch of richness. On reflection the drink tasted better than I thought, it was actually quite nice. The problem was that due to it's extreme richness it was difficult to finish, after each sip you felt you probably drawn a bit too much from the glass.
In conclusion, I must admire Shannon's for the technical work in maintain the separation of the light cream and the dark coffee but I must question the wisdom of putting foil in the microwave.
But if you are in the market for two pretty neat toddy glasses, this is quite a nice way to get them.
Posted by David Bridgman-Smith at 08:46