I don’t normally do “unboxings”, but those giddy types at That Boutique-y Gin Company sent me a set of samples packaged in a way that required a photographic record.

The company is an offshoot of That Boutique-y Whisky Company, in turn descended from Atom Supplies who run Master of Malt. The whisky version has been bottling odds and ends for some years, with a trademark style of busy, cartoonish label, often featuring people involved with the product, and the gin version carries on this tradition. They describe themselves as the world’s first independent gin bottler, releasing small batches of new and experimental gins from various distillers, as well as producing some of their own.

With so many gins on the market, and no let-up in sight to the idea that everyone needs to have their own gin, many new products seek to go somewhere unusual with their botanicals, to stand out from the crowd, often to the extent of describing the end result specifically as tangerine gin, blueberry gin, seaweed gin, what have you. (In fairness, a few of these concepts, such as orange gin, do have a heritage stretching at least back to the early 20th century.) So in order to be truly boutique-y, TBGC have gone out of their way to find some truly odd things to blend into their gins.

Early this year I went to their birthday party where I was confronted by such oddities as a gin made from botanicals that have been shot into space (no, it didn’t seem to affect the flavour) and gin aged in Canadian icewine barrels. The three samples sent to be this time were Finger Lime Gin, Cucamelon Gin and Strawberry & Balsamico Gin. Finger limes are an Australian plant which apparently have a texture like caviar with a lime-like flavour (though apparently not actually related to the citrus genus). Cucamelons are indigenous to Central America and look like small watermelons and taste, it says here, of “lime-dipped cucumbers”. For the final gin they take a gin base, add fresh strawberries as well as strawberry and black pepper distillates, and balsamic vinegar from Modena, aged for 12–25 years in barrels of chestnut, cherry, oak, mulberry, ash and juniper wood.

Each of the gin samples was accompanied by a tiny phial of a key distillate in concentration (60% ABV)—or, in the case of the last one, a phial of the vinegar in question. These have been vacuum distilled from whole finger limes, or whole cucamelons with a bit of liquorice root. However, this does not seem to be an indication that the gins are made by distilling botanicals individually then blending the distillates (as happens with Sacred and Gin Mare), as the notes suggest that for the actual gins all the botanicals are macerated together.

Tasting the gins together there does seem to be a house style, with a rich, smooth, sweet feel: where some traditional gins are dominated by steely juniper high notes, mixing well with tonic, these give the impression they are meant to be approachable neat, easy on the tongue and weighted with woody, floral middle notes. 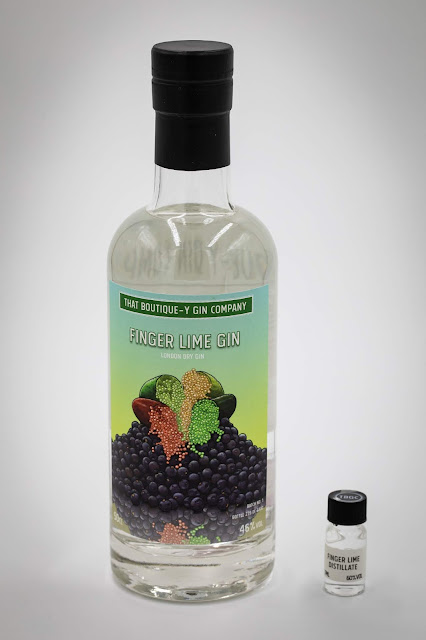 The Finger Lime Gin has a nose of lime, unsurprisingly, but it’s a soft, sweet, perfumed smell, without the sharpness of a fresh lime. It is plump in the mouth, with a jammy fruit character up front, then some savoury, stemmy flavours coming afterwards. It’s pretty drinkable neat, with only a hint of bitterness on the finish.

In a gin and tonic (with Fever Tree Naturally Light)*, however, the Finger Lime Gin is pretty disappointing, in my opinion. I was expecting a joyous, juicy drink, but the gin lacks the juniper backbone that would traditionally balance the sweet/citrus/bitter contributions of the tonic. It’s a bit too soft and sweet in its own right, and creates a G&T that’s a bit unnerving, almost sickly. (I’m struck by an odd salty finish, not entirely unwelcome, but I’m not sure where that is coming from.)

So I figured it might sit more comfortably in a Martini, but I’m not convinced about that either: again a bit too sweet and not sitting comfortably with the vermouth (Belsazar Dry in this case). So I try another of my standard gin tests, an Aviation, made with woody Luxardo Maraschino, dry Bitter Truth crème de violette and lemon juice. Now, suddenly, it all comes together. And the weird thing is that, as I adjust the amount of gin to get the balance right, this is the first time that I have been particularly aware of the Finger Lime’s juniper content. I can’t entirely explain it, but a Finger Lime Aviation is a very satisfying cocktail.

Next I try a Gimlet—a traditional blend of gin and Rose’s Lime Cordial. I honestly expect it to be a bit of a pointless exercise, since the gin has lime in it anyway, but again I am surprised. For the second time I notice the gin’s juniper aspect, and however the various lime elements are relating to each other, it is a pleasant cocktail overall, with just enough sweetness from the cordial helping to round things out.

The little phial of finger lime distillate is an interesting idea—not that you would have any difficulty spotting the presence of lime in the finished gin blend. At 60% ABV the distillate is drinkable, and offers a sharp blast of fruit/sour/bitter. It’s like biting into a particularly intense kumquat. 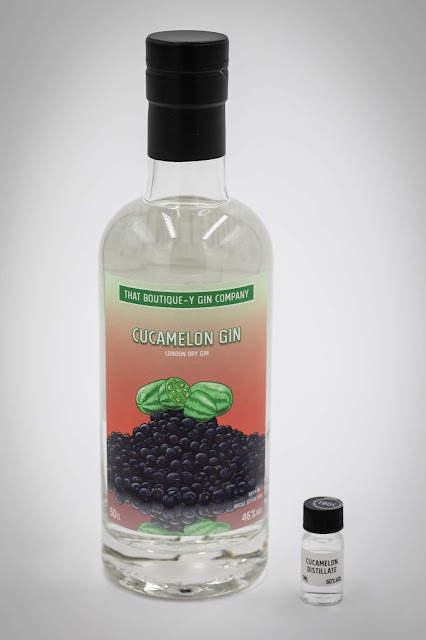 By this time I’m running low on the Finger Lime gin, so I turn my attention to the Cucamelon. It has a general family resemblance, being fragranced on the nose and plump and smooth on the tongue, but with an obvious cucumber element that makes it straightaway more savoury. In a Martini it is obviously more ginny, again with the savoury cucumber notes (and cucumber in gin is not novel, thanks to Hendrick’s and Martin Miller’s). But there are complex layers unpeeling here, first a wholly unexpected blackcurrant fruity sweetness, then a woody dry spice like cassia on the finish. And there is juniper too. In a Gimlet and an Aviation it works perfectly well but doesn’t transform like the Finger Lime did—I’m guessing drinks like those are the Finger Lime’s spiritual home, while for me the Cucamelon is more successful in itself and therefore works better in simpler serves.

The cucamelon distillate proves even more fascinating. Yes, there is obviously a bright cucumber element up front (and, oddly, nothing that I would really identify as melon) but there is another wave of flavour, darker, more mid-range—seriously, it’s suggesting orange, rose, banana, artichoke and more—plus a finish of pink peppercorns. 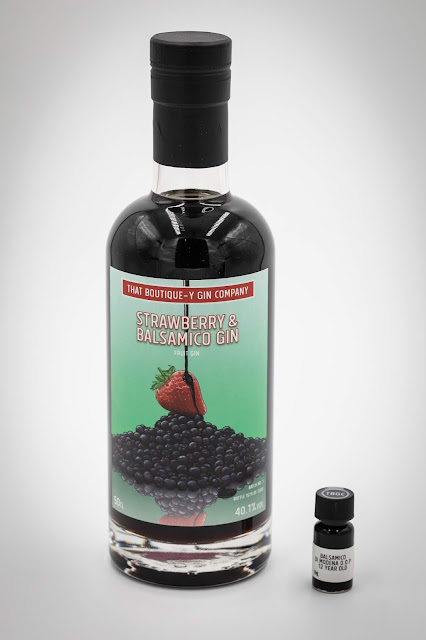 The Strawberry & Balsamico gin has a nose, unsurprisingly, of strawberries. It was never going to be exactly like fresh strawberries (strawberry infusions always end up tasting of stewed or baked fruit, like the strawberry Palmetto moonshine), but this is closer than I had expected. The balsamic note is subtle, but combines with the fruit to suggest coffee. The juniper is clearly present too. On the tongue is has the thick, rich texture of those intense, dark Pedro Ximenez sherries; but, though sweet, it is not tooth-curlingly so.

So what does one do with it? It makes a surprisingly viable G&T but TBGC suggest trying it lengthened with sparkling wine. This does work very well (I tried it with some rosé Champagne, which possibly emphasised the strawberry notes), creating what is effectively a one-stop Champagne-style cocktail, with the fruit element clear—but also again I found myself noticing the juniper character more strikingly in this combination with as much ginniness as you would get from a French 75. It’s a complex, sophisticated combo.

As for the tiny phial of balsamic vinegar? Absolutely delicious. It combines a sweet, delicate approachability with a depth and complexity of flavour that I’ve not previously encountered in a vinegar, balsamic or otherwise. I don’t know how much this stuff costs for a bottle but it’s probably worth it.

So what of the TBGC range in general? They tend to be competently made, though there is something of the dog-on-its-hind-legs about these eccentric botanicals. To my surprise, the one I would be most keen to hang on to is the least versatile, the Strawberry and Balsamic gin—simply because of the cocktail it creates when added to sparkling wine. Of the other two, I probably preferred the cucamelon over the finger lime, but one does get the impression that they dream up odd flavours for the sake of being different. And what’s wrong with that? Every now and then they’re going to come across something that strikes such a chord it could be a future classic.

* This is a favourite of mine at the moment: it doesn’t have any artificial sweeteners, just less sugar than the regular tonic.