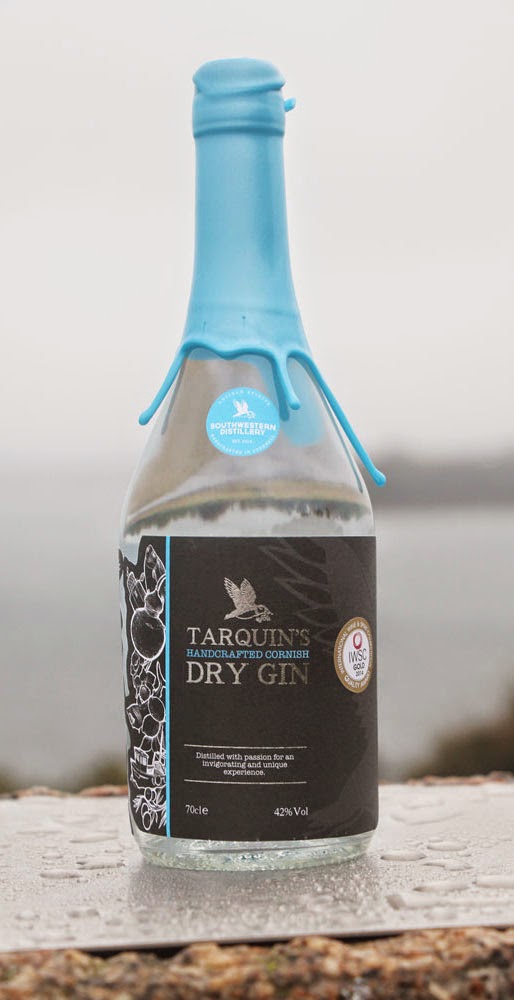 Walking along the cliff path on St Anthony Head in Cornwall, with views out over the mouth of the Fal, the ancient fortifications of Pendennis and St Mawes Castles, the boats slicing in and out of Carrick Roads, I got to wondering what a self-consciously Cornish gin might taste of—what local botanicals could you use that would evoke the flavour of the place? Seaweed or something briny? Or the blackberry bushes that line all the paths, from which I idly picked as I walked along?

So I was interested to notice, while sitting in a fairly minimalist restaurant in St Mawes, that one of the few spirits on offer was Tarquin’s Cornish Gin. I tracked it down and discovered that it is, indeed, made by a chap called Tarquin Leadbetter at Southwestern Distillery in Wadebridge. They make just two products, the gin and Cornish Pastis (see what they did there?), using a small flame-fired copper pot still. They use fairly traditional botanicals from around the world (though mostly sourced through a bloke called David, apparently)—juniper from Kosovo and coriander from Bulgaria (which they describe as lemon-sherbety rather than hot and spicy like Moroccan coriander), angelica root from Poland, orris root from Morocco, green cardamom seeds from Guatemala, bitter almond from Morocco, cinnamon from Madagascar and liquorice root from Uzbekistan. They also use fresh (rather than dried) citrus peel, orange, lemon and grapefruit, from wherever they are in season in the world. And the final, magic ingredient—and the one that makes it distinctly Cornish—is Cornish violets, grown in Tarquin’s garden. It is diluted down to 42% ABV using springwater from near Boscastle (which is also bottled and sold as mineral water, called MeadowSweet). Each bottle of the small, 300-bottle batches is signed and numbered by hand by Tarquin himself, and dipped in striking blue wax for good measure.

I notice that, in addition to Tarquin’s signature and the bottle number, the label also includes a box labelled “Character”, again filled in by hand on each bottle. You might think the character of the gin would be fixed by the recipe, but Tarquin deliberately includes these tasting notes to emphasise the variations you get with gin made in this way. “We're celebrating the nuances between batches, highlighting the fact that our spirits are not mass-produced,” he tells me. “We could have blended batches, or implemented a sherry-style solera bottling system. But I think it's quite fun to do our crafty sort of way.” My sample was “Earthy orange”, while another bottle I had a taste from was “Eastern spices” and one in a photo on the website is “Fresh orange blossom”.

“In the months up to Christmas we're doing something special with some filming, to make these tasting notes more interactive,” Tarquin adds. “…So stay tuned!”

If I expected the gin to smell of violets I was in for a surprise. Chilled you mostly get fresh, stern juniper and lemony coriander to the fore. On the palate you also notice a softness, perhaps from the water, or the liquorice or the orange peel. At room temperature the orange notes are more prominent on the nose too, along with an interesting herbaceous quality that emerges as quite a characteristic. Interestingly Tarquin says, “One unusual ingredient is the Devon violet. From these I take the delicate leaves, which add a vibrant green freshness to the gin and create something deliciously unique.” So it is not the violet flowers involved but the leaves, and this is presumably the stemmy, herbal element that I am getting.

I instantly warm to this gin, not least because it is a gin that knows it’s a gin. So many modern gins shy away from juniper in favour of sweet or floral elements which are, let’s face it, aimed at attracting people who don’t really like gin. But Tarquin puts juniper up front. As such the gin works well in a G&T and especially in a Negroni, where the juniper pokes through but the mid-range elements and the underlying softness round the drink out too. Then you have that interesting herbal layer combined with the orange aroma, and at the bottom a relatively soft, sweet finish so as not to scare the horses. This also makes it good for a Martini as it is relatively approachable neat.

To get a clearer picture I put the gin head-to-head with some others. Bombay Dry emerges as drier, with a lemon-sherbet sharpness, with Tarquin’s gin softer and sweeter. SW4 has a similar fullness, but Tarquin’s gin comes across as more savoury, leafy and herbal, while SW4 is plumper, sweeter and more about spice. Tanqueray is quite similar on the nose but Tarquin’s is fatter and more complex, with more herbal punch and again a softer, sweeter finish. Beefeater 24 does have a tea element which stands out and it is lighter and drier. Finally, G’vine Nouaison matches up in the aromatic stakes, smelling quite minty and suggesting sweet roots. In fact it seems positively cloying, again emphasising the savoury herbal cut of Tarquin’s jib.

Overall I think Tarquin’s Cornish Gin is a remarkable achievement, managing somehow to combine the steely, upright juniper cutting edge of classic London Dry Gin, with a sophisticated modern soft finish, and a distinctive mid-range of orange zest and sappy herbaceous punch, like fresh leaves crunching under foot. It is complex and versatile, but not so outré as to fall down in classic gin cocktails.

Does it remind me of Cornwall? The bottle has images of fishing boats, basking sharks and what looks like the lighthouse not fifty yards from where I was staying, but there is nothing of the sea about the liquid (though I suppose a dash of Islay whisky might remedy that). But Cornwall does have a warm, humid microclimate, so perhaps the waft of verdant undergrowth in this gin is apt.

Tarquin’s Cornish Gin can be had online from Master of Malt for £35.57 or if you’re in Falmouth you can pop into the Bottle Bank and get it for about £29. For more stockists see www.southwesterndistillery.com.
Posted by Clayton Hartley at 13:01