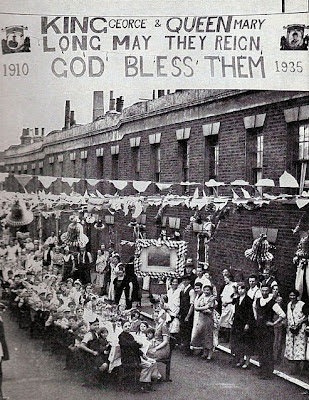 With the arrival of Her Majesty’s 60th year on the throne it seemed only fitting that the Candlelight Club should recognise this in some way. So, in keeping with our vintage credentials, we decided to celebrate with a party featuring cocktails created for the 1935 Jubilee (the closest one to the Prohibition period), honouring 25 years of George V on the throne.

By chance, just two years after the Jubilee, Bill Tarling, head bartender at London’s Café Royal and council member of the UK Bartenders Guild, itself formed only in 1933, published The Café Royal Cocktail Book. The UKBG had already published Approved Drinks, an attempt to lay down definitive recipes for standard and classic cocktails (as much as anything to prove to doubting customers that the drink was right and they were wrong). But Bill wanted to produce a book that included all kinds of other cocktail recipes he had encountered, and he wanted his book to be for consumers as well as the trade. Billed on the cover as the “Coronation Edition” (emerging in the year that George VI took the throne) it was actually the only edition produced. But coming when it did, just two years after George V’s Jubilee, it was ripe to gather up the explosion of mixological creativity that was deployed to honour His Majesty’s anniversary.

My thanks go to DBS who pre-empted me and dug out some likely recipes for a feature in the New Sheridan Club Newsletter. I took some of these, played around with the recipes and added a couple of our own, for the Candlelight Club party this Saturday, 9th June. 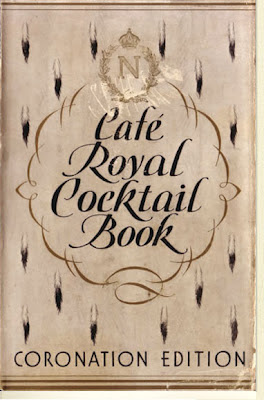 Jubileesha
2 shots gin
½ shot Lillet Blanc
½ shot Cocchi Americano
3 dashes orange bitters
Dash sugar syrup
Garnish: orange and lemon twist
Shake, strain and add a lemon and orange twist. Invented by Bert Penn, the original called for “Lillet”, which at the time (or until very recently) would have been sold as "Kina Lillet", flavoured with the bitter cinchona bark that gives tonic water its quinine and distinctive taste. Lillet later reformulated, producing the sweet, orange-flavoured Lillet Blanc that you can buy today.* Much agony has gone into speculating on the original Kina Lillet taste (which also features in James Bond’s Vesper Martini), and how it could be replicated with modern products. Here I used a half-and-half blend of Lillet Blanc and Cocchi Americano, considered by many to be a good simulacrum of Kina Lillet. I’ve no idea if this is true (Cocchi say they have been making Americano since 1891, which was 19 years after Kina Lillet came on the market so it could have been inspired by it), but it has a strong, fascinating and, I always think, rather gingery taste, with definite bitterness. By mixing it with Lillet Blanc and a dash of gomme, I think you get something that is approachable for the modern palate but also revealing of the complexity of the two aromatised wines in the mix.

Jubilee Ideal
2 shots bourbon
1 shot red vermouth
½ dry white vermouth
Dash lemon juice
Garnish: Maraschino cherry with a little of its syrup
Shake and strain. Add cherry with whatever syrup comes with it, or perhaps a dash of maraschino liqueur. Created by Harry Craddock of the American Bar in the Savoy, this is essentially a tweaked Manhattan. Manhattans are often categorised as “sweet”, using bourbon and sweet red vermouth, “dry”, with dry white vermouth, or “perfect” or “ideal”, with a blend of the two. So this is a Jubilee version of an Ideal Manhattan. The recipe actually calls for one part each of sweet and dry vermouth and two parts bourbon, though I think this makes for rather a dry drink, particularly after you add the “squeeze of lemon”, so I biased it in favour of the sweet vermouth. It’s nice with a maraschino cherry, particularly if you allow some of the cherry syrup in (or just add some maraschino liqueur), which helps to balance things up.

Jubilant
1½ shots gin
1½ shots orange juice
1 shot Benedictine
½ shot lemon juice
Dash Angostura Bitters
Garnish: orange slice
Shake and strain into an ice-filled highball. Invented by J. Perosino, who was a UKBG member, but I don’t know any more about him than that. The original would have required more like 2 shots of gin but only half a shot of orange juice. It’s nice that way but I wanted to make it a little longer, so I upped the OJ and used proportionally more Benedictine that gin, serving the result over ice. It’s a great way to showcase the complexity of the liqueur, in an approachable, fruity drink.

Coronation Variation
1½ shots sweet red vermouth
1½ shots dry white vermouth
1 shot Calvados
½ shot apricot brandy
Soda top
Shake and strain into ice-filled highball. Top with a splash of soda. The Café Royal Cocktail Book has a recipe called a Coronation that involves sherry, dry vermouth, maraschino and orange bitters: if you look online you will sometimes find this called a Coronation Variation. But this recipe, also called a Coronation Variation, is quite different. Its origins are obscure (DBS discovered it online too) but it’s nice to find a drink that puts vermouth so much to the fore, and this balances very well with the sweet apricot and the dry baked apple flavours of the Calvados. (I like it with Dubonnet for the red vermouth, which is a nice nod to HMQEII, as I believe she likes gin and Dubonnet.) I have suggested a splash of soda just to make it a comfortable long drink over ice.

Royal-Tea
1½ shots gin
1½ shots port
1½ shots Earl Grey tea
1 shot marmalade syrup
¼ shot amaretto
Garnish: lemon slice
Build in a highball. Garnish with a slice of lemon. Our own Will Sprunt invented this for the Royal Wedding last year and I wanted to give it another airing. I was a bit sceptical about the high level of syrup but it does seem to work out best this way; it’s still a sweetish cocktail but it balances with the tannin in the tea. (I experimented with adding lemon juice to balance the sweetness, but it just seemed to muddy the flavours.) The marmalade syrup was made from water, marmalade, sugar and honey, adapting various recipes I found online; the marmalade gives it s slight bitterness from the rind, so it’s not as sweet as you might think. The drink is at once complex and refreshing, and with an unusual breakfasty quality!

Noble Line
2 shots gin
1 shot Berentzen wild kirsch
½ shot Bärenjäger
Ouzo rinse
Rinse a cocktail glass with ouzo and pour it out. Shake remaining ingredients with ice and strain into the glass. I devised this in honour of the Queen's bloodline: the cherry and honey flavours of German kirsch and Bärenjäger for the house of Saxe-Coburg, transformed into the house of Windsor by the addition of English gin, with a dash of the Greek aniseed spirit ouzo as a nod to Prince Phillip. I think it actually works remarkably well: at first you’re struck by the cherry of the kirsch, then you realise you can taste the gin really clearly, the juniper notes floating up. Later it hits you that the honey of the Bärenjäger is coming through as well. The ouzo you mostly get on the initial nose.

* The Lillet website seems currently to be closed for repairs, but it's interesting to note that, although it is conventionally considered that the post-1986 Lillet has less quinine, the Wikipedia entry insists the quinine levels stayed the same but the sugar content was reduced. I certainly find it hard to detect much bitterness in modern Lillet Blanc.

Posted by Clayton Hartley at 04:03