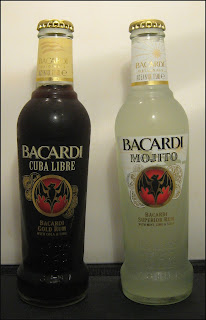 At a recent Soireé in Parliament Square, I received a tip from a notable rum expert. The tip was regarding the best premix that they had tried, Bacardi's Mojito. I noticed they were on sale for about £12 in Tesco for 70cl, but considering this a bit steep for experimentation purposes, I was pleased to see that the Bacardi Mojito and the Cuba Libre are now available in single serve bottles for a bargainous £2 a time.

Mojito 5.4%
A mix of Rum, Mint, Lime and Sugar
This had a good balance of flavour: mint, lime and a touch of sweetness. It wasn't too fizzy and you can't really taste the rum. With a bit of ice, it is quite refreshing and would probably be quite nice at a BBQ. Good value for money.

Cuba Libre 5%
A mix of Rum, cola and Lime
Quite good, with a good, crisp lime flavour, albeit maybe a tad sweet. This tastes like a Cuba Libra made with Rose's Lime Cordial. There's a touch of spice from the rum, which makes it more complex than the Mojito, made with white rum. Overall, quite good and certainly worth £2.

In Conclusion
On my quest for tasty premixed drinks, I think I've tried at least 30 varieties and both of these are certainly in the top 10.

Posted by David Bridgman-Smith at 05:02