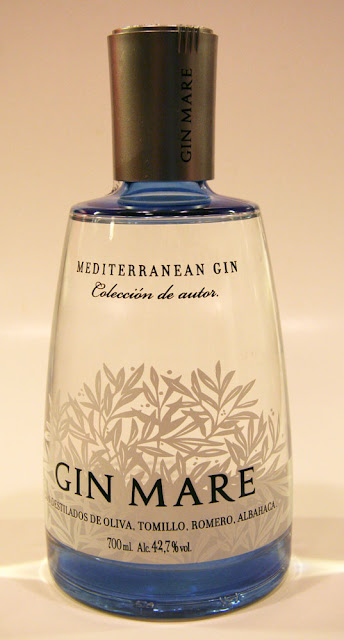 As the fad continues for producing “gins” that include all manner of bizarre flavours, Gin Mare, behind which a fair amount of marketing clout seems to have been put, looks like a bold move. In addition to juniper, coriander, cardamom and citrus peel (lemon plus both bitter and sweet oranges), we have thyme, basil, rosemary and olives. The idea is to create a self-consciously Mediterranean gin, something that denizens of that region will embrace as their own. (The name comes from the concept of Mare Nostra, “Our Sea”. Spain is a huge gin market so you can see the logic.)

Fortunately they allow us Brits to drink the stuff too. The bottle is striking, with an olive-leaf pattern prominent on the front along with the phrase “Colección de autor”. Some marketing bumf I’ve seen attempts to translate this, rather bafflingly, as “author’s collection”. I speak no Spanish, so I don’t know if they are getting at something artisanal here, a product created by craftsmen, or if it means the creation of an visionary auteur: it is, apparently, “the vision of a new generation of a family with a long tradition of distilling high quality spirits”. So, both traditional and innovative at the same time, conveniently. 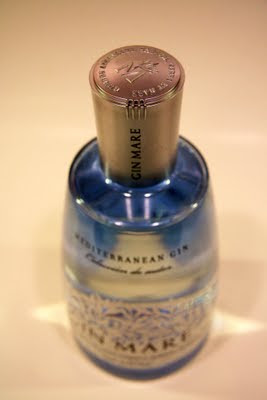 The blue and white shades of the bottle represent the sky and the clouds, the sea and the surf.  The bold cap covers the whole neck and forms a handy 50ml measure. Its top is struck like a classical medallion and there are four vanes on the side that apparently represent the four Mediterranean botanicals (the basil is from Italy, the thyme from Turkey, the Rosemary from Greece and the Arbequina olives—the only olives to have their own DOC category—from Spain, though in fact the citrus also comes from Spain and the juniper is, they say, harvested on their own farms, so I assume that is Spanish too). But to me the bottle cap has a Futurist architectural quality and reminds me of Mussolini’s Fascist EuR development in Rome.*

The product was launched in February 2010 and the promotional literature shows that it was born as a titanic marketing exercise, attempting to encapsulate a relaxed Mediterranean lifestyle, a warm climate, a native love of gastronomy and a sense of escape. (This last one seems at odds—if you’re a native of the Med, surely you’re not escaping there? It’s only us pasty Brits who try that.) There are photos of beautiful people dressed in minimalist white and scenes of what Mount Olympus would look like if it were a club on Ibiza.

But a lot of thought and effort have gone into the product too. All the botanicals are distilled separately (something I used to think only Ian Hart of Sacred did, but one hears of it more and more). Whereas most gins macerate their botanicals all together for about 24 hours, Gin Mare botanicals are steeped for varying times—from 36 hours for the olives up to a year for the citrus peel. At a tasting at Graphic in March we were told that the reason for the separate distillations is that the olive distillate varies a lot in heaviness and flavour, so this way they can keep the balance consistent. The distillates are hand blended and the finished product is bottled at 42.7% ABV.

As if terroir, tradition and technique weren’t enough, the manufacturers have hedged their bets even further by erecting the still in an 18th-century chapel that was dismantled brick by brick and reassembled in its current location in an old fishing village between the Costa Brava and the Costa Dorada, presumably to make sure that God is also on their side.

So many New Gins seem to play down the juniper aspect and add sweet, floral notes, apparently to woo punters who perhaps are ripe to like the idea of gin, but fundamentally don’t like the taste (especially women, at whom some brands are specifically aimed). Gin Mare is, when you unscrew the cap, clearly gin—the juniper hits you first. But then there is obviously something floral, smooth and sweet going on too. On the palate I get something like cinnamon, warm and rich, and then there is the olive, quite noticeably, plus the woody, aromatic thyme and rosemary elements. This is the fascinating thing about Gin Mare, the way it manages to present sweet, smooth, floral qualities yet avoids ending up cloying like many modern gins, and somehow successfully marrying this with a distinct saltiness from the olives and the dry, savoury, resinous elements of the herbs too.

In a G&T this character remains pronounced, with both a distinctive herbaceous quality and a silky smooth mouthfeel. At the Graphic tasting we had our wrists slapped over the idea of garnishing the drink with lemon or lime (despite the fact that citrus is an ingredient) on the ground that they would overpower the flavours: instead we should use rosemary, thyme, basil or mint. In a Martini one should use an olive.**

I tried the gin in a few other classic cocktails:

Negroni (equal parts Gin Mare, Carpano Antica Formula red vermouth, Campari)
With Antica Formula this makes a warm, chocolately Negroni, with the sweet fragrance of the gin and the prominent vanilla of the vermouth creating a smooth feather-pillow for your tongue; but then there is that bitterness at the end, from both the vermouth and the Campari. Not sure it’s the very best Negroni I’ve had—perhaps it wants the steely juniper note in more conventional gins.

Dirty Martini (4 parts Gin Mare to 1 part dry vermouth, plus about ½ tsp of olive brine) It seemed an obvious thing to try and, as you might imagine, it works very well—although you are really just adding more of the salty olive character that is already there. Nevertheless it does emphasise the effectiveness of the botanical combination in the gin.

Gimlet (2½ parts Gin Mare and ¾ part lime cordial) Balances in a surprising manner—it brings out the floral character in the gin, though the savoury, salty qualities are still in there too. The warm, spicy elements poke through clearly. In fact in an interesting way this cocktail spotlights the complex balancing act that Gin Mare attempts—and for my money by and large achieves—though I sense it might be a love-it-or-hate-it thing for most people.

Gibson (A dry Martini with one or two cocktail onions as garnish) Having quite a savoury tooth I do like this cocktail and I figured that a gin with so many savoury elements as Gin Mare would work well. But I’m not sure I was right: in context Gin Mare came up with some surprising sweet elements that seemed to jar with the sulphurous allium flavour of the onion (reminding me a bit of sweet-pickled herring). It makes you realise that the dominant herbaceous notes aren’t as savoury as they seem.

Red Snapper (2 parts Gin Mare, 4 parts tomato juice, ½ part lemon or lime juice, Tabasco, Worcestershire sauce, black pepper, celery salt) Likewise an obviously savoury cocktail (and one of the few classic cocktails that sits easily with the extraordinarily savoury Aviation gin). And it was pretty good, yet again it didn’t work as neatly as I would have assumed. In this savoury, almost meaty context, Gin Mare showed itself to be more floral and sweet than I had thought. And I am reminded just how powerfully flavoured it is: this is a muscular cocktail context, with the acids of the tomato and lemon and the chilli and pepper heat, yet the Gin Mare immediately pushed its flavour profile through.

Aviation (2 parts Gin Mare, ½ part maraschino, ½ part lemon juice, ¼ part crème de violette) As gin shorts go this is relatively fruity/floral, so I didn’t expect it to work but I was wrong. This sort of cocktail, perhaps like the Gimlet, showed that Gin Mare actually has a strong floral perfume, that in this case sits quite happily with the violet and cherry flavours.

I’ve now nearly finished my bottle of Gin Mare in my experimentations, which is in itself a sign. The strong thyme, rosemary, basil and olive elements are impossible to ignore, yet this would make the gin sound like food, and as it turns out it is not that savoury as a mixer. It works well in combinations with a floral/fruity character. Forcefully characterful, it may well divide and perplex drinkers, but I still find myself fascinated by it.

* See m’colleague’s recent review of Adler gin from Munich: adler means “eagle”, but it is reminiscent of the Adlerhorst, Hitler’s “Eagle’s Nest” mountain hideaway. So if Adler is “Hitler’s gin” then perhaps Gin Mare can be “Mussolini’s gin”. I believe that Churchill was partial to Plymouth in his Martinis. So, what would be Roosevelt’s and Stalin’s gins, I wonder..?
** This whole business of garnishes sometimes seems a bit pointless to me. Granted that nothing you can do to the constituent liquids will create the same effect as squeezing the oil from a strip of lemon rind on to the surface of your Martini, but many prescribed garnishes leave me thinking, If you believe your gin needs that extra element of grapefruit/basil/raw beef or whatever, why not just add that flavour when you distil it and serve it without a garnish? Much of it is just gimmickry, methinks.
Posted by Clayton Hartley at 06:33