Of course we’d all heard the rumours. But it wasn’t until an old wino staggered into the IAE offices and inconveniently expired in the wingback in reception that we realised it might be true: clutched in his right hand (after we opened his fingers with a bolt-cutter) was a map—torn and charred but unmistakeable.

In our report on the recent exhibition about bitters we mentioned that the curator Ricardo Leizaola regarded Herb Afrik and Alomo Bitters as the tastiest examples of all the “world bitters” he encountered. I had noticed that the makers of Herb Afrik, the Ghanaian distillery GIHOC, also produced three gins: Castle Bridge, Lawyer (with a label that is surely a close reference to Gordon’s Export) and Betsuo. Curious, I’d tried contacting them but had failed to elicit a response.

Meanwhile DBS had become interested in a Ugandan gin called Uganda Waragi. So when our vagrant friend—who turned out to be a burnt-out ex-bartender famous for his trips into the Interior to source rare ingredients, and widely regarded as insane after the tragedy with his Puffer Fish and Durian Fruit Daquiri—snuffed it holding a map with a big “X” marking the fabled land of Forest Gate, we knew it was a sign. Saddling the club mule (startled at being asked to leave the stables for the first time in 15 years) we loaded up with iron rations of foie gras and Sauternes and headed up country.

Forest Gate turns out to be a hive of multicultural trading. David had actually established that one shop, Pascheal Exotics, did stock Uganda Waragi and had reserved a few bottles. But on the way there and back we ducked into various trading establishments looking for the bitters—when we eventually found some the store also sold Castle Bridge. “All the way from Ghana,” the shopkeeper said with a mixture of pride and wistfulness. “It’s lovely.” My curiosity was well and truly piqued: what could be so different about this gin that it was worth importing to a small shop in north-west London? Yet the retail price of £12 for Castle Bridge and £15 for Waragi was cheap enough to make you wonder just how rough this was going to be, when bottles of domestically-produced Gordon’s and Beefeater sell for £14–15. 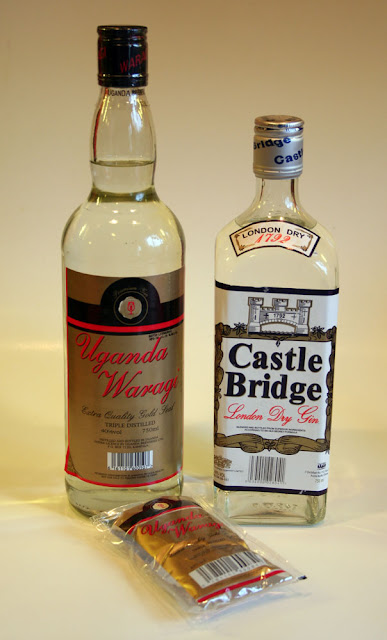 Interestingly Uganda Waragi also comes in soft plastic sachets, each a couple of double measures. It has a strangely utilitarian feel, as if it had come from a UN aid parcel, and there is something sinister about a delivery method that of course must be drunk all in one go. I’m told a lot of drinks are sold this way in Africa, though some campaigners are trying to get the format banned.

Back at the Institute we dashed to the lab without even brushing the trail dust from our topees, eager to put the drinks through their paces. Castle Bridge is bottled at 40% ABV and has a very juniper-led nose, almost a bit ham-fisted in its unsubtlety. Neat the palate is light and astringent. I always think of Beefeater as rather ethereal and straight-backed but compared to Castle Bridge it seems fat, spicy and complex. SW4 is a juniper-led brand specifically intended to be quintessentially ginny but again, compared to Castle Bridge’s pencil-lead juniper fixation, SW4’s sweet orange notes are emphasised. Mind you Castle Bridge is a perfectly creditable gin. It’s more palatable than Hogarth and about the same price, while DBS assures me it’s considerably pleasanter than Richmond, his current benchmark for repulsiveness.

The name and the styling are clearly trying to evoke an Old World European sophistication and the year “1792” is emblazoned across the top label, though the significance of this date is never mentioned. It clearly calls itself a “London Dry Gin” though I wonder whether it really fulfils the EU requirements. Neither the bottle nor the website give anything away about the botanicals* but what originally roused my curiosity was the fact that it is made from molasses neutral spirit. This sounded rather exotic, but in fact sugar beet molasses turns out to be the base for quite a bit of mass-market gin and about a third of European vodka production.

I dig out some Gordon’s green and mix up a couple of G&Ts with Schweppes tonic, using Castle Bridge in one and Gordon’s in the other. I offer them blind to DBS and ask which he prefers. Without much deliberation he chooses the Ghanaian gin. In truth even the 37.5% Gordon’s green is more complex than Castle Bridge in my opinion, but the latter has an appealing freshness to it and, as I suspected, when mixed with tonic it performs its role in the partnership perfectly diligently. I suspect its simplicity might actually make it ideal with more elaborate tonics.

So there you have it, ladies and gentleman: at £2–3 cheaper per bottle Castle Bridge is better value than Gordon’s (and a higher ABV too).

At £15 a bottle Uganda Waragi (40% ABV) is dearer. The term “waragi’ is actually a generic one for locally distilled spirit, made from all kinds if things including banana and cassava. The word apparently means “war gin” and was coined by European ex-pats, referring to the practice of drinking before battle for “Dutch courage”; the local word for such spirits was enguli. I suspect the actual “gin” style of flavouring was brought by the settlers themselves and adopted locally. Despite decades of legislation plenty of the stuff is distilled illegally—only last year 80 people died from drinking toxic banana moonshine.

The beverage that is branded as Uganda Waragi is made by East African Breweries Ltd, makers of Tusker beer and ultimately owned by Diageo. It is triple distilled from millet and its sales represent a third of the entire spirits market in Uganda. Interestingly, although this product clearly is what you would call gin, the label only uses the word in very small writing near the top, and I have seen pictures of some labelling which doesn’t mention gin at all. (Perhaps it is only labelled as gin for export.)

It’s quite sweet, floral and spicy compared to Castle Bridge, with a remarkable perfume to it, though I feel that it could possibly tend towards cloying, with something in the smell that reminds me of plasticine. Up against SW4 it actually has a similar overall profile though the latter is more complex as well as more juniper-driven.

DBS carted three bottles of the stuff away. I’m assuming this batch is harmless, though, now I think of it, I haven’t heard from him in a while…

* The label does helpfully explain that it is "blended from superior ingredients according to an old secret formula".

To find out how we got on with the bitters, plus various strange soft drinks, tune in for Gin Safari 2, coming soon…

Posted by Clayton Hartley at 01:20