Sloe gin is not something I think about most of the time. But while testing some serving suggestions with Beefeater’s Winter Edition gin I tried one cocktail that called for sloe gin as an ingredient. I happened to have a miniature of Plymouth’s version and it got me wondering how many firms made it and how they compared.

I suggested a tasting to DBS and, being a compulsive taxonomist, he jumped at the idea. Considering that one manufacturer told us that most of the people he knew who drank it actually made their own, it was surprising that we managed to unearth 17 different products to try. (There at least another three which we have not yet tried.) All the producers were happy to supply samples (well, all except Gordon’s, but since theirs is the mostly widely distributed perhaps they felt they didn’t need the publicity)—in fact I think many were delighted that anyone even knew about their product.

Traditionally you harvest sloes, fruit of the blackthorn and related to the plum, and infuse them in gin with sugar, sometimes adding cloves, cinnamon and/or almond (though apparently a well-made sloe gin extracts an almond-like flavour from the sloe stones). Pick your berries in October or early November when they are most ripe, and prick or cut them. Folklore has it that this should be done using thorns from the bush itself—and if you must use a metal knife or fork, be sure it be silver. Arrrr. I have heard that the sugar is not just for taste, but is necessary early in the procedure to extract the full flavour from the berries. Add the sloes in a half-and-half mixture with gin, along with the sugar, and shake daily for the first week, then weekly for a month or two. Sounds like the idea is to have it ready just in time for Christmas, though I’m told the flavour will be better if left till the next Christmas. Even after the liquor is strained off, the leftover berries can by used to make “slider”, cider infused with post-gin sloes, or indeed to make sloe jam.

What you end up with conventionally is something that balances red berry fruit, tartness, sweetness, dry tannins from the skins and warmth from the spirit. But if making your own is such a traditional ritual (even Prince Phillip does it), how would these commercial products measure up?

We assembled a team of seven: David and Sara Bridgman-Smith, Fleur de Geurre, Compton-Bassett, Robert Beckwith, Will Sprunt and myself. In order to sample this many different products between seven of us would mean 119 glasses which our venue, Graphic, weren’t able to free up, so we sourced some plastic shot glasses. (I’ve no idea what the “correct” vessel for tasting sloe gin is, but at least this way it was a level playing field.) Perhaps we should have had some homemade sloe gin to compare against, but we would have needed to think about that months earlier—and it wouldn’t really have been much use to you, the reader, as you could not have gone out and bought that anyway.

Of course it’s hard to keep a memory of 17 flavours in your head, and David had an idea to split the samples into four tranches, giving a favourite out of each, then seeking our favourites of the favourites (slightly flawed—what if the best and second best of all turn out to be in the same tranche?). We also paused halfway through, to wrap our tongues in hot towels and massage them back into shape.

But it quickly emerged to me that there was another way of subdividing the samples. Some seemed clearly “classic” in style—specifically Plymouth, Hayman’s, Gordon’s and Marks and Spencer—with a deep red colour and aiming for a traditional balance of the flavours described above. Then there was a second group which I described as “ginny”—Hawker’s, Sipsmith, Foxdenton and Sloe Motion. These were the ones that clearly wanted you to remember that this was originally gin. (I gather some commercial products just use neutral grain spirit and bypass the actual gin stage; which seems valid enough to me. I suspect that the traditional reason for starting with gin is that that is what was to hand. It might be interesting to home-make batches side by side using gin and vodka.) These high-gin examples unsurprisingly were also the ones highest in alcohol. (Overall the sloe gins ranged from 17.6% to 30% ABV, but most were around 26%, evidently the point which most manufacturers felt offered the right balance.) 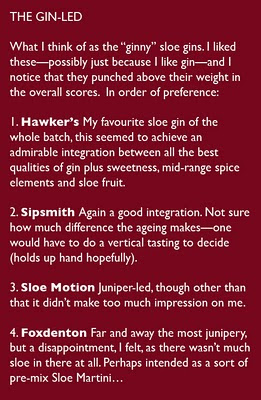 The remaining samples, which I dubbed “artisanal”, went in various directions. Some were light and fruity, others sweet, others heavily spiced. I’ll save my individual tasting notes till the end and cut to the chase—which drink was best? Attempting to rank all 17 in order of preference was too big a task for a mortal palate, but we felt that tasters would probably gravitate towards certain favourites, so we asked everyone to name their top three, in order. Awarding three points for a first place position, two points for a second and one for a third, we were able to come up with a reasonably scientific scoring system. It’s also worth noting that between seven people picking three sloe gins each, only ten products actually featured at all. Out of the total of 42 points awarded, here is how they were allotted:

See below for the also-rans that received nul points.

If you’ve not tried sloe gin there are, as you can see, plenty to choose from (though I note that the most widely available, Gordon’s, didn’t even make it into the top ten). I admit it’s not easy to get anything other than Gordon’s, though Majestic do stock Sipsmith’s. Follow the links to individual sites to find out how to purchase. 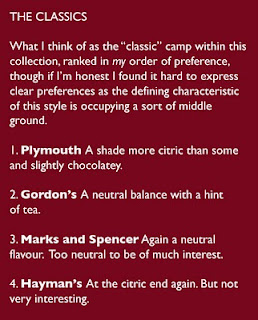 Full list with my tasting notes (in the random order in which we sampled them):
1. Moniack Sloe Liqueur (17.6%, £12.99) A light, orangey colour, more like a rosé wine. Cider nose. Sweet, light palate with a thin, simple taste.
2. Bramley and Gage Sweet Sloe Gin (26%, £11.49 for 35cl) B&G actually make three different sloe products. This is darker in colour than the Moniack and with a richer nose, of red berries. Also sweet, though better balanced. Almonds on the nose and palate. Herbal finish that, as Will points out, is reminiscent of certain Eastern European liqueurs and bitters.
3. Plymouth Sloe Gin (26%, c. £17.95) Darker but with a quieter nose and a drier, tarter palate. Balanced and straightforward. The website makes a song and dance about how traditional it is and the pure Dartmoor water that goes into it, but in fact the sloes come from Poland.
4. Sipsmith 2009 Vintage Sloe Gin (29%, £20 for 50cl) Sipsmith make their vodka, gin and sloe gin (in that order—the one from another) in a garage in west London, in the first new copper still to be built in London for about 200 years. They make a point of the fact that this batch was bottled last year. I categorise this as a gin-led product (hence the high ABV). Indeed it has a strong juniper “blue note” and makes the Plymouth seem quite almondy by comparison. I got a hint of pipe tobacco.
5. Bramley & Gage Sloe Gin (26%, £11.95 for 35cl) Unsurprisingly like no. 2 but not as sweet. Almonds less pronounced. Clear herbal nose with cinnamon on the palate. Expected to like it more.
6. Lyme Bay Sloe Liqueur (26%, from £13.23 for 35cl) Smells of juniper but is actually quite sweet and orangey on the palate. Also has some dark brown note, like coffee, perhaps.
7. Gordon’s Sloe Gin (26%, from £15.99) Citrus nose, balanced palate—almonds, alcohol, berries. Will mentioned that it tastes of used tea bags—in a good way—and once the idea is there you can definitely taste an Earl Grey element.
8. Hawker’s (28%, about £17.50) Apparently this was the first sloe gin to be made commercially, to a recipe dating back to 1790. Although it is made by Desmond Payne, Master Distiller for Beefeater, it actually uses Plymouth gin as its base, but its sloes (unlike with Plymouth’s own sloe gin) are wild-picked on Dartmoor. I think this is a cracking example and once I had tasted it it remained my favourite. It is a ginny sloe gin (hell, I guess I just like the taste of gin) but I these elements balance well with the sloes and the whole is better integrated than the other gin-led examples.
9. Juniper Green Organic Sloe Gin (26%, £22.25) Uses wild sloes from Romania. Citrus nose, with a hint of fermenting pears, and elements of cinnamon and coffee on the palate. Popular round the table.
10. Hayman’s Sloe Gin (26%, £17.29) An example of the classic style. Smells of mulled wine and oranges, with a hint of maltwine (i.e. unaged whisky, and a distinctive element in genever). Well balanced, but not hugely interesting. By comparison the M&S version seems more weighted towards citrus and the Plymouth seems chocolatey.
11. Bramley & Gage Organic Sloe Gin (26%, £13.27 for 35cl, £22.47 for 70cl) Uses a different (organic) gin base from the normal B&G version. Smells faintly of ink or boot polish, but not necessarily in a bad way. Almondy, but less so that the non-organic version.
12. Sloe Motion Sloe Gin (26%, £15.95 for 35cl, 22.95 for 70cl) These people are sloe-crazy, making sloe brandy, sloe whisky, sloe vodka, sloe chutney, sloe truffles. They probably live in a house  built from compacted sloes. Perhaps surprisingly, the sloe gin falls into the gin-led category. Hints of lavender.
13. Gabriel Boudier (25%, £17.55) Made in Dijon, in France. Very soft and quite sweet. Perhaps suffered from coming late in the list, as there is more going on than you at first think. Will sums it up as “kind of pleasant”, which sounds like damning with faint praise.
14. Marks and Spencer Sloe Gin (26%, £10.95 for 50cl) A classic style, with an almond element but balanced, with no angles or corners. Nice enough.
15. Foxdenton Sloe Gin (29%, £18.95) “Recognisably Different Sloe Gin”, they say. They’re right in the sense that, even among the other ginny sloe gins, this one tastes as if they really didn’t want to contaminate their lovely gin with any more sloes than absolutely necessary. Rather unintegrated. Doesn’t work for me though others like it; it’s DBS’s favourite.
16. Cowen Sloe Gin (26%, £15.29 for 50cl) Smooth, subtle, herbal, with coffee notes. OK.
17. Jack Cain’s Sloe Gin (30%, £24 for 70cl, £4.95 for 5cl) The driest and strongest sample here. Cain was a 19th-Century entrepreneur, smuggler and illicit distiller in Northumbria and this is made to an “old family recipe”. Quite a hardcore drink, more like a sloe bitters, seemingly with no added sugar. But intriguingly complex, with elements of vanilla, chocolate, coriander. Probably quite a useful cocktail ingredient; I'm definitely going to try a Sloetini. You can buy miniatures online but if you want a full bottle you’ll have to get it in person from the makers or from Fenwick’s in Newcastle.
Posted by Clayton Hartley at 02:55