The purple reign of Parfait Amour 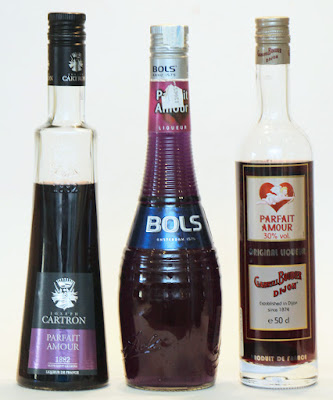 By chance I found myself with three different brands of Parfait Amour in the house recently—Bols, Boudier and Cartron. This liqueur is possibly most used in cocktails for its purple colour, but despite its similarity in this respect to crème de violette it is not primarily flavoured with flowers. Recipes vary and Bols, who claim to have invented it, do use rose and violet petals to make it, but the flavour that seems to link the different interpretations is actually citrus.

The Cartron website doesn’t give away the recipe but implies that this liqueur is all about the citron. The nose is strongly of orange and lemon, as is the palate, which is sweet, with a liquorice note and only the subtlest florality. It does make you wonder why someone would come up with a citron liqueur then decide to make it purple—and this sample is the most intensely coloured of the three—but the site has a quote from 1769 about the use of citron in Parfait Amour so it has clearly been made this way for a long time.

Boudier’s version also hits you with oranges on the nose and something sweet like crystallised angelica or parma violets. On the palate it is drier and seems more spiritous than its 30% ABV. There is orange here again and perhaps something nutty. The website has nothing to say about this liqueur, but I gather that curaçao oranges, rose petals, vanilla and almonds go into it.

Bols’s ingredients are much the same as Boudier’s—orange peel, vanilla, almonds and “flower petals (principally roses and violets)”—but their version is quite different. They speak of how many a lover’s quarrel has dissolved under the influence of this drink, and it does have the reputation of being a dainty tipple for ladies. (It’s interesting, then, that Cartron talk of how it is “ideal in light and fresh cocktails” and don’t actually suggest you drink it neat.) The Bols example has a more confectionary nose and is sweetest on the tongue. More than anything it reminds me of that nougat that has bits of candied fruit in it, a character that must come from the almond and vanilla as well as the citrus. I would say that the Bols version is the most distinctive—the others seem a bit vague by comparison—and is the only one I can imagine dainty ladies choosing to sip. The Boudier seems a bit too austere and the Cartron has that liquorice edge that might prove divisive.

Although I don’t have any to hand, De Kuyper also make a Parfait Amour that they describe as a marriage of citrus (lemon and bitter, fragrant curaçao orange) and vanilla. Marie Brizzard make one with sweet oranges, orange blossom and vanilla. Giffard make theirs with orange, vanilla, violets and geranium and Lejay use bitter orange peel and violet buds.

There actually aren’t many classic cocktails involving Parfait Amour. The Savoy Cocktail Book from 1930 has just two (there are significantly more with crème de violette and, I suspect, more with Crème Yvette as well), the Jupiter and the Trilby No.2. No one seems to know anything about their origins, but I’m assuming the Trilby was titled after the play of the same name,* as was the wont with smash-hit plays in those days.

Shake with ice and strain into a cocktail glass. The first time I put a row of these together, using the different brands, I’m not sure what to make of it: it seems very much of the time when the Martini was the bedrock and many “new” cocktails were just slightly contaminated versions of it. The tiny quantity of orange juice doesn’t seem to add much apart from a cloudiness: it’s possible that this opacity in conjunction with the Parfait Amour is intended to create a pale sky colour (Jupiter is Roman god of the sky), though in the case of the dark Cartron you get something that looks like a severely polluted sky just before an ugly storm, while the others veer more towards orangey-pink.

The Boudier’s citrus character blends easily enough with the gin and does poke its head up now and then with notes of sweetness and stemminess too. The Cartron has a similar effect, though it gets a bit lost. The Bols version is certainly more distinctive: while the juniper/Parfait interface is not horrible, it will come as a bit of a shock to Martini drinkers. Overall it is more cloying and doesn’t seem to sit comfortably with the seriousness of the Dry Martini ingredients. Might go better with Babycham.

However, noting that Ted Haigh, in Forgotten Spirits and Vintage Cocktails (2009), champions the Jupiter but is very particular about measures—in his recipe the gin is at 45ml and the vermouth at 20ml—I have another go the next night, using his exact quantities (and Bols liqueur) and the result is indeed more elegant. I must have overdone the Parfait Amour previously, as this version is actually quite dry. This probably does make the best of the liqueur; its nougat character takes on a hint of (white?) chocolate in this subtle incarnation.

Again, the Carton and Boudier versions produced only a fairly subtle influence. The Bols Parfait Amour made its presence felt more, sitting in the mix with the malty rasp of the Scotch, the herbal sweetness of the vermouth and the pungence of the absinthe (I used just a rinse), though whether the end result is complex or conflicting is debatable.

I have a feeling that Parfait Amour can be quite a busy blend of flavours in itself, and so might actually work better in simpler combinations. Experimenting, I found that just adding a dash or two to a glass of Champagne or sparkling wine was one of the most satisfying serves, enabling the flavours of the liqueur to open up but not overwhelm (and in fact Bols claim on their website that this combination is drunk at weddings all over the world). There are a number of cocktails that are basically this, plus another ingredient as well. The Blonde Bombshell, for example, recommended on Bols’s website, adds elderflower liqueur:

The two liqueurs do complement each other, with the prickly high notes of the elderflower slotting in with the Bols’s warm nutty and vanilla layers. But I find myself boosting the elderflower (I’m using St Germain) to get a good balance, and frankly the whole thing is a bit too sweet for me anyway. Adding more sparkling wine helps, as does squeezing a bit of lemon juice into the blend.

The Double Perfect does the same thing but uses triple sec instead of elderflower liqueur. Again they specify 15ml for each liqueur but, warned by the Blonde Bombshell, I start with just 10ml and frankly this is all you need (unless you’re using a very large glass).

The Cointreau cranks up the orange aspects already present in the Parfait Amour and controls the confectionary nougat elements, making for a relatively elegant, poised use of the liqueur, especially in these reduced quantities. (I’m using Bols, which has a broader flavour than the other two brands, which are more citrus to start off with, so I’m not sure how much point there would be to this blend using Cartron or Boudier.)

And as a final test, my eye was caught by this combo on diffordsguide.com, to which he gives a higher score than most other Parfait cocktails:

Once again it really only takes a teaspoon of the liqueur to do the job, though I’m not convinced that it is a job worth doing. The pungent herbal element of the vodka, with its bitter aftertaste, interfaces interestingly with the plump, sweet vanilla of the Parfait Amour in the same way as the absinthe does in the Trilby, but it is more thought-provoking than actually pleasant, and is really not a cocktail I would be keen to have again.

As you can probably tell, I can’t get terribly excited about Parfait Amour—and I’m in good company, as the great David Embury, author of The Fine Art of Mixing Drinks (1948), ranked it with Forbidden Fruit as his two least favourite liqueurs. The best delivery methods for it are the Jupiter, the Double Perfect or just a small 5–10ml dose in sparkling wine—but as you can see, the key here is to use it sparingly.

* The play, an adaption of the Georges du Maurier novel, played first at the Boston Museum in 1895 before Herbert Beerbohm Tree brought it to the UK, where it ran with great success at the Haymarket Theatre in London. Trilby O’Ferrall is the female lead. The Trilby hat gets its name from the play as well.
Posted by Clayton Hartley at 04:44