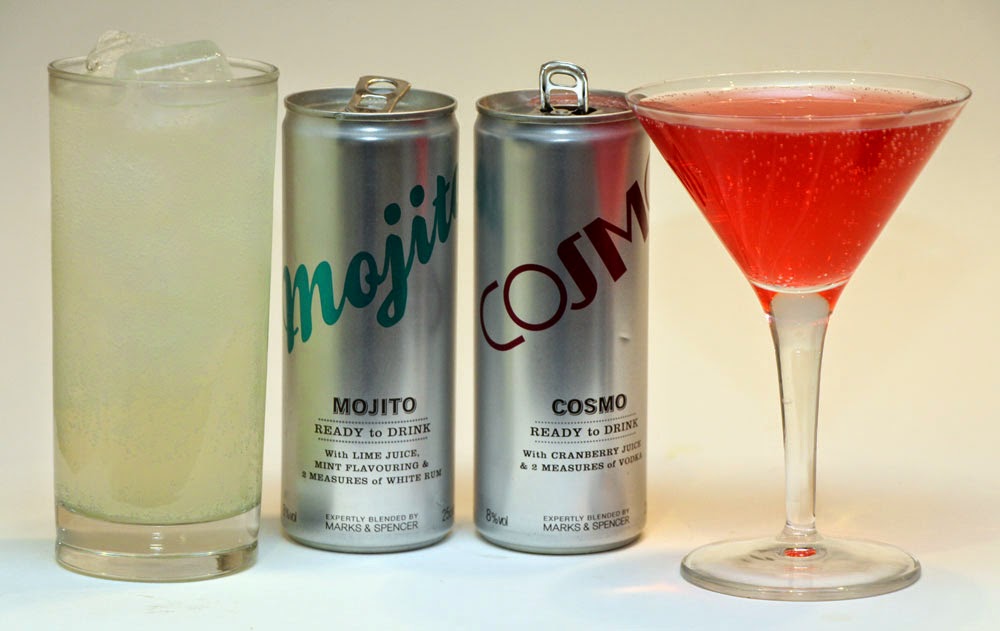 In October I reviewed the KÖLD line of premixed cocktails, the latest in the cavalcade of attempts to offer instant mixology for people who lack the equipment, ingredients or inclination to make their own cocktails at home.

The trick with such things is how to preserve the more perishable ingredients in the mix—the impressive Handmade Cocktail Company range from Master of Malt simply focuses on old fashioned cocktails (including the Old Fashioned) that lack fruit juices and are high enough in alcohol to be self-preserving. KÖLD sold their mixes in foil pouches, which made me suspect they had been heat-treated after sealing.

Queuing in the small Marks & Spencer branch on Charing Cross station the other day I was confronted by some tins containing the chain’s own attempt at premixes. I scooped up a couple for sampling, a Mojito and a Cosmopolitan.

For those who don’t know, M&S occupies a space in most British people’s hearts as a reliable place to buy underpants, work shirts and the like, but they also do food, pitched as fairly high end, and even have some branches selling nothing but food. The travel outlet at Charing Cross has quite a high bias towards booze, clearly catering for commuters who can’t get through the train ride back to suburbia without a single-serving mini-bottle of Pinot Grigio to dull the pain.*

The Mojito hits you with a mint flavour that has a mouthwash artificiality. It’s not too bad, with detectable lime notes, but a tad thin with a slightly bitter finish. A little like bitter lemon, in fact. But that chemical mint is what dominates. It also seems to coat your teeth. The KÖLD Mojito likewise struggled with the artificiality of its mint flavour: clearly it is not possible to get a fresh mint taste in a premix, but the nation must be crying out for tinned Mojitos as this particular cocktail keeps cropping up.

The Cosmo has a terrifying colour, followed by a bubblegum fruity smell that fills the room. But it’s not actually that bad, with a reasonable balance between sweet and sour and the triple sec (or rather “orange distillate”, as it says on the ingredients list) detectable. I’m not sure I’m really getting cranberry juice, though the label claims it is in there (from concentrate).

As usual with premixes, both these cocktails are unnaturally low in alcohol for what they claim to be (8% in each case, the same as the KÖLD range), but this is apparently because the target market would otherwise be drinking alcopops of the same ABV. I didn’t try spiking them with extra spirit this time, though I’m sure it would have been an improvement. The Mojito did go down the sink, but I did actually end up finishing the Cosmo, which must tell you something.

* I can’t see this range on the M&S website, although I have now discovered that they also sell a different range of classier premixes in 50cl bottles. I seem to recall that there was also a Bloody Mary and a Harvey Wallbanger in the range, along with a G&T about which I have read bad things.

Posted by Clayton Hartley at 12:14