With a cherry on the top: Luxardo Sangue Morlacco

Cherry brandy is one of those ancient cocktail ingredients and, like “apricot brandy”, isn’t really a brandy at all but a liqueur. Typically neutral spirit is infused with crushed cherries, although some posher examples use grape brandy as a starting point. (None of which is to be confused with a spirit made from fermented and distilled cherry juice, such as kirschwasser; maraschino, another cocktail staple, is also a liqueur, made by diluting and sweetening a spirit made from fermented and distilled marasca cherries, and is consequently colourless and tends to be drier and more delicately flavoured than cherry brandy.)

At a recent Candlelight Club event, our mixologist David Hamilton-Boyd included a recipe that specified Luxardo Sangue Morlacco Cherry Liqueur. I’d not heard of this and was interested to find that it is a cherry brandy that is oak-aged for two years. Luxardo are better known for their maraschino, and I gather that this is a by-product: cherries are fermented and then the alcohol is distilled off to make the maraschino. The left-over post-fermentation pulp is what is used to make the Sangue Morlacco, infused into neutral spirit with added sugar. There is a long history to this, and the name Sangue Morlacco—“blood of the Morlaccos”—was given to the drink by the poet Gabriel d’Annunzio in 1919 in respect of its colour, after the fiercely proud Dalmatian warriors who fought for the Republic of Venice and defended their homeland against invading Turks.

Pretty much all cherry boozes seem to include the stone, often grinding it up with the flesh, with the result that the dominant flavour is actually of almond. (It’s hard to conjure the flavour of cherries as distinct from their stones: I happen to have a jar of dark cherries in Luxardo kirsch in the fridge, so I eat one. But mostly you get the texture of the cherry flesh and that almond flavour of the kirsch. In fact while working on this post I open a bottle of red wine that has more of a distinct cherry fruit aroma than any of these spirits.)

I’ve got two other cherry brandies to hand, one by De Kuyper and some Cherry Marnier, by the same folk who make Grand Marnier. These two are quite tawny in colour, whereas the Morlacco is a vibrant purple-red, which is quite impressive after two years in a barrel. 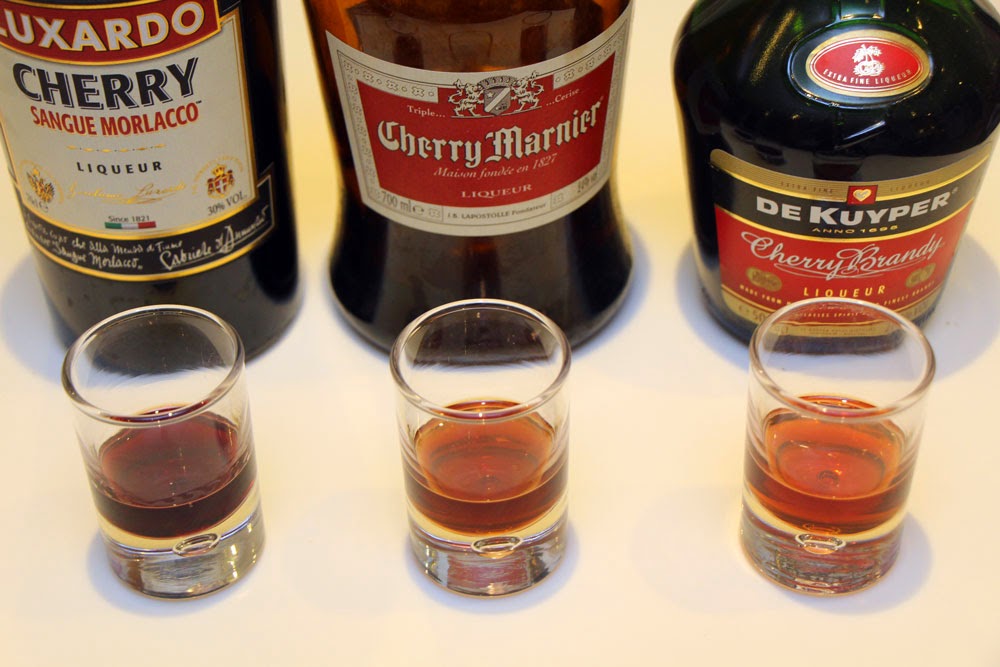 The De Kuyper has a nose of marzipan and much the same on the palate. It is cloyingly sweet and pretty one-dimensional, with a very short finish. The Cherry Marnier is warmer, with darker, more complex flavours. To me it still essentially tastes of almonds, but there are elements of fresh fruit on the nose and palate too. The Sangue Morlacco immediately strikes me as more vinous on the nose, almost as if there were red wine in it—I suppose it does contain fermented cherry juice as well as spirit, and it has spent two years in a barrel. That familiar marzipan note still dominates the aroma and taste, but in the mouth it is less cloying that the others, with pronounced tartness and dry tannins (presumably from the wood) to balance the sugar. There is also a pepperiness on the finish.

There’s no doubt that, out of these three, the Sangue Morlacco is the most interesting, having more balance and depth. But I don’t think I would choose to drink any of them on its own.

The Blood and Sand* is a classic cherry brandy cocktail, so I rustle up a couple, one with De Kuyper and one with Sangue Morlacco. The traditional recipe is equal parts Scotch, cherry brandy, red vermouth and orange juice. I follow Simon Difford’s lead and double the quantity of Scotch (in this case Famous Grouse, with Martini Rosso as the vermouth).

First off, the Morlacco version is quite a different colour, a tawny red, as opposed to the sludge hue of the De Kuyper concoction. On the nose and palate, this latter is dominated by the confectionary almond element, giving it a slight cough-mixture quality. The same cocktail made with Sangue Morlacco is drier, with dark flavours, seemingly more emphasis on the vermouth and something reminiscent of port. It is altogether more of a grown-up drink, methinks. For me, this is where the superior qualities of Luxardo’s Sangue Morlacco come into their own—making cocktails with cherry brandy in them much more palatable.

* This cocktail was created in 1922 to celebrate the new Valentino movie of the same name. It was quite common in those days for movies and plays to be saluted in this way. It doesn’t seem to happen much today, but then would you want to drink a Fast and Furious 3? Or, for that matter, an Assassins Creed IV: Black Flag?
Posted by Clayton Hartley at 04:32