All that Glitters Is Gold

I was sitting in a local Tavern with my folks and Mrs. B when I noticed dear old Mumsie's drink seemed to be shimmering. Upon closer inspection it seemed to have glitter floating in it. Thinking that I may have found a new source of Goldfinger's favourite metal I was quickly corrected that it was actually J2o Glitter Berry the soft drinks latest limited edition, a mix of cherry, grape, spice and glitter.

It appears that this not only available in the local drinking dens but also in hypermarkets too, as Mumsie seemed to have a stock of them at home. I acquired two bottles to test for the good fellows (readers) of the IAE.

Metal is not uncommon in alcoholic drinks, Goldschläger (Swiss/Italian cinnamon schnapps) is a well known brand* and there was once a Silverschläger; no doubt local varieties of these products still exist on the continent.** For a tenuous link one could point to the alcoholic Sanatogen Wine with Extra Iron.

So what makes it glitter? A quick call to Britvic Consumer Careline revealed it to be "edible food-grade glitter"*** also known as E171 and E172.****


But how does it taste?

Very smooth, with long cherry notes, jammy and fruity, quite intense but not too sweet. Some nutmeg and cinnamon too and a hint of vanilla. A slick texture but very nice with it. A long finish and, no you can't taste/feel the glitter. 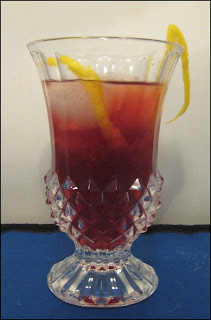 It wouldn't be the IAE without a cocktail so here we go.

It is quite amusing to have a sparkling drink and also quite festive. The sweet apple warmth goes well with the intense jammy cherry notes of the drink, add a dash of Caralicious caramel vodka and it would be like a cherry and apple pie. Easy to drink and pretty tasty. If you are averse to sweet drinks I suggest adding a splash of lemon juice.

*The gold is in there as it was originally thought to have medicinal benefits. The idea that the metal makes little cuts in the inside of your throat so that alcohol can be quickly absorbed is the stuff-and-nonsense of a tanked-up know-all teeny bopper.
** For the high-rollers you could have Platinumschläger or even Diamondschläger, with tiny crushed up diamond in it. Until then you'll have to be happy with Precious Vodka.
*** Some tortology for you there.
**** Also known, respectively,  as titanium dioxide and iron oxides/hydroxide—both  of which are illegal as food additives in Germany.
***** Named after the New Jersey engineer who invented glitter
Posted by David Bridgman-Smith at 10:09