Everything seems a bit ginger at the moment. Last week we were at a launch of Crabbie’s new range—following the success of their alcoholic ginger beer they have now followed this up with a cloudy, non-alcoholic one, plus a diet version, a chilli-kick version, plus a “twist of orange” version—which was my favourite until DBS pointed out that its taste was reminiscent of Fanta, after which I couldn’t get the association out of my mouth. They even let us taste their new blended whisky, presumably intended to mix with their soft drinks, a product so hush-hush they wouldn’t let us photograph the bottle. 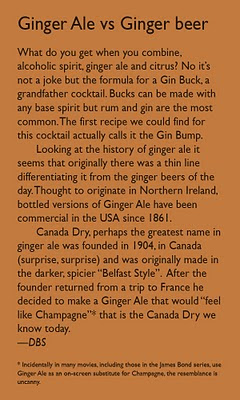 The rep did say she thought that ginger seemed to be the flavour du jour, so the Institute was clearly on trend when, inspired by the success of our group test of tonic waters in November, we held a ginger ale tasting on 17th January. We were at Graphic once more, under the banner of the Juniper Society, and we had 28 souls blind-tasting 11 ginger ales—ten readily available in shops plus a mysterious wild-card eleventh. Most people chugged them one after another but I was indulged with my own set of 11 glasses—DBS knows I like to be able to return to any sample at will to make close comparisons.

I confess I don’t really drink ginger ale as a rule (in fact, tonic water aside, I don’t really drink soft drinks) so I had less of a vested interest this time, nor any preconceptions or yardsticks. It was simply a question of which of the drinks tasted the nicest. I’ll put my tasting notes at the bottom but, when obliged to give my top three, I personally rated Canada Dry Diet at the top, followed by Britvic and the Mystery Ginger Ale in third place. This is admittedly odd, given that the diet versions overall didn’t fare that well. Looking at my notes I see that I found this one “less sickly” that the others, albeit on the watery side—so perhaps I just preferred it because it tasted of less! Oddly there were three products which, to me, had a noticeable taste of sesame—Sainsbury’s, Tesco Diet and, to a slightly lesser extent, Canada Dry. Others picked up on this when I pointed it out. I’d be curious to know what ingredient was responsible for this.

So, when we compiled the votes of all 28 people, who won?


Yes, it was a good day for the supermarket brands. But what was the Ginger Ale With No Name? It turned out to be homemade by David. Having previously made a tonic syrup (sugar syrup with quinine and citric acid) and a bitter lemon syrup (the same plus lemon juice, zest and pith), he simply infused fresh ginger into some of the latter then added soda water. The result is arguably too cloudy and a bit too gingery to be considered ginger ale per se (is it a ginger beer instead? See box above), but it beat the commercial products hands down.

My tasting notes (tasted blind):
Fevertree Ginger and lime aroma; perhaps smells more like ginger beer than ginger ale. Palate a bit thin but also sickly. Surprisingly unfizzy. Smells nicer than it tastes.
Tesco Fizzier than Fevertree. Much less ginger on the nose and more lime, plus hints of grapes and nail varnish remover. Still a bit sickly with an Opal Fruit aftertaste.
Canada Dry Diet Pinkish colour and a grapefruit nose. Palate is less cloying; somehow watery, which means it seems easier to drink on its own.
Sainsbury’s Whiff of industrial solvent on the nose but with an odd dry hint of oats or halva/tahini. This sesame element continues on the palate.
Tesco Diet Not dissimilar to the Sainsbury’s but with quite a fierce pepperiness on the finish and on the vapour, which made me cough. A slick sweetness I don’t like, though the actual taste is surprisingly thin. Hint of rose water, plus that odd sesame thing.
Britvic Rather neutral, which might be a good thing if you’re looking for a serviceable mixer. No corners. Dry nose.
Carter’s Hugely fruity nose but a lightish palate. Hint of chilli. Others observed a floral nose, in a Fairy Liquid sort of way.
Waitrose Initial off-note which dissipates leaving a neutral, solid profile.
Canada Dry That sesame thing again. Good initial ginger and lime smell with a peppery hint, though the actual palate is a bit synthetic, like toilet cleaner.
Baron's Ginseng Ginger Ale Ridiculous cherry-bomb nose and flavour. “Like a tuck shop,” someone said. Very sweet and synthetic. Like synthetic strawberries.
Mystery Ginger Ale Is this homemade? Cloudy and with an immense head of foam like none of the others. Has an intriguing savoury quality—smells like Cuppasoup or vegetable bouillon powder. Tomato? Pepper kick on the tongue but also a butteriness. Quite complex and lingering. Would actually have rated it higher if it weren’t for the disconcerting buttery element.

Posted by Clayton Hartley at 18:46