A cocktail for St Patrick's Day 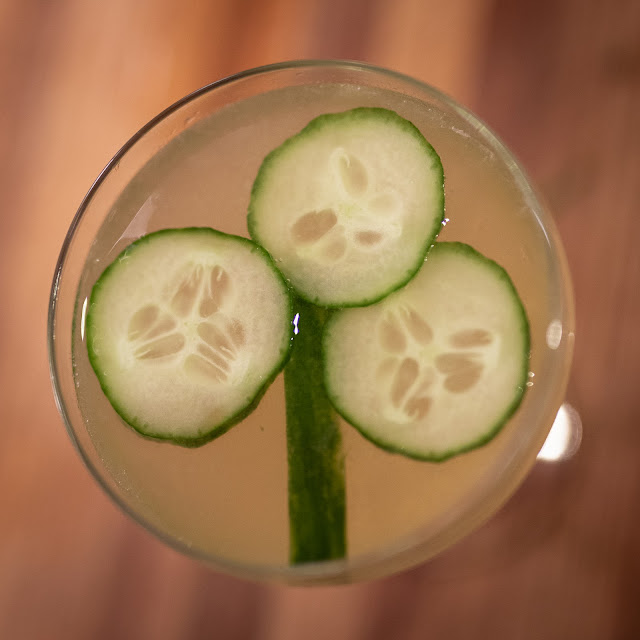 I produced this on Tuesday, for St Patrick’s day, obviously, and should have posted it then, but what the hell. I was reminded of the garnish effect I accidentally produced with the Maid in Jalisco cocktail a few years ago—at the time it reminded me of a four-leaf clover and I made a mental note to do something shamrocky with it for St Paddy’s Day.

I’d received a promotional email from Difford’s Guide with some Irish whiskey drinks in it, and one included cucumber, which is what reminded me. Now while cucumber is to be found in and around gin all the time these days (see my recent posts on Caspyn and Hendrick’s), cucumber and whiskey are not obvious bedfellows. This recipe is called an Irish Maid and consists of:

Muddle the cucumber in a shaker, add the other ingredients and shake vigorously with ice. The garnish is obviously optional, but you can tell I have time on my hands now with the corona virus stalking the land. (These are Difford’s proportions; others allow slightly more sugar, though I personally think it is quite sweet enough.)

The cucumber certainly makes its presence felt. The spiky elderflower is more subtle, though it’s a flavour that seems to merge seamlessly with the cucumber, in a savoury, herbal way. The lemon and sugar are just the classic cocktail sweet ’n’ sour building block, and the whiskey rises up behind with caramel warmth. It’s unexpected but it really works, and it all to easy to drink.

The cocktail is apparently derived from the Kentucky Maid, essentially a Mint Julep with added lime juice and cucumber. Two days ago when I went to the supermarket I found the shelves mostly empty (thanks to panic buying by hoarders—really this epidemic has brought out the worst in people). In the fresh veg section the only thing left was a large quantity of cucumber, so I see the promotion of cucumber-based cocktails as Doing My Bit. (In two different shops the only fruit they had left was grapefruit, so watch this space…)
Posted by Clayton Hartley at 04:56