More on Moussec (and a Prohibition secret?) 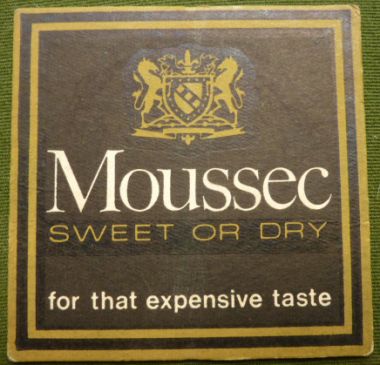 It’s been almost five years since I posted about Moussec, yet it still seems to be attracting interest. I only dimly remember the product when it was available, but some older readers have fond memories of drinking it or of working at the factory in Rickmansworth.

Mr Philip Scammell, a former Moussec employee, dropped me a line yesterday tipping me off to a strange incident in 2012 when workmen renovating a property on rue St Claude in Les Riceys, in the Aube region of France, suddenly found gold coins raining down on their heads. Hidden in the space between the ceiling and the floor above were bags containing 497* US $20 coins, weighing 17kg in total. The building was owned by Champagne Alexandre Bonnet and was being adapted as accommodation for grape pickers. But a local historian revealed that up until 1960 it had belonged to Moussec.

The historian, François Gilles, explained how the firm was founded by M. Rivollier, a biologist by training, who pioneered the production of sparkling wine in the Riceys area. However, between 1921 and 1923 he was engaged in a legal tussle with the Marnais over the right to use the term Champagne, as the Aube had been excluded from the 1908 law defining the Champagne region. The suit seems to have proved financially ruinous for Rivollier,** who then turned to a new ruse. He bought up unsold grape juice from the region and concentrated it through vacuum-evaporation to the consistency of fruit pulp. He then shipped this to Britain where it was diluted again and fermented into sparkling wine. My original suspicions are confirmed that the purpose of this was to avoid duty on imported alcohol. The report from L’Est Eclair writes, “The solidified juices could be shipped to England without difficulties, whereas wine was hit by heavy taxes and sometimes denied entry altogether.”

The gold coins, which were sold at Bonhams in Los Angeles in 2013 for $945,000, dated from 1851 to 1928, according to Bonnet CEO Philippe Baijot. The fact that it was US gold, deliberately hidden in the late 1920s or early 1930s, does rather beg the question of whether Rivollier was doing more than simply dodging British import taxes. Was he also trying to bootleg Moussec into the US? Judging by the size of the hoard, he seems to have been doing rather well at it.***

I’d be curious to know if there are any records of Moussec in the US. It’s possible that Rivollier was exporting some other booze, or simply exporting the juice concentrate, which would have been legal—but I doubt it would have been worth it, given the quantity of US-grown grape juice available. In fact Californian vineyards that had previously produced wine, simply switched to selling grape juice during Prohibition, vast quantities of which were shipped east where it fuelled sly domestic wine-making operations, particularly among communities from parts of Europe with strong wine-drinking traditions.

In any case, Moussec certainly seems to have thrived in Britain. In Approved Cocktails, published by the United Kingdom Bartenders Guild in 1937, there are four references to Moussec as a cocktail ingredient.

Mr Scammel also gave me a bit of information about his own time in the business in the 1960s. He writes:

The Moussec winery was situated in what was once known as The Maltings in Cloister Road, Rickmansworth. I started as a Technical Assistant on October 1st 1962. The Works Manager was Mr Ian Marshall, the Chief Chemist was Mr George Young and the production chemist Colin (?).

My responsibility was the fermentation of the grape juice imported in the form of concentrate from the company’s plant in Les Riceys in Aube, France. The concentrate was stored in concrete vats situated underground at the front of the winery in Rickmansworth. It was re-diluted using spring water from under the factory (?) and then fermented using yeast which had been extracted from a successful spontaneous fermentation in the Paris laboratory of M. Rivollier and then stored on agar plates in the laboratory.

Following a short break as a Research Assistant at Schweppes Research Laboratory in Hendon, London, from 15th October 1965 until 30th April 1966, I returned to Moussec where I was engaged in research work on wine pigments until 15th September1966.

According to a document Mr Scammell sent me, his last project was on a rosé wine: red wine concentrate was re-diluted and fermented, before being fined in a way that reduced the pigmentation to that of a rosé wine. This was then blended with Moussec to produce a pétillant wine. It’s not clear if this wheeze made it to production.

Other documents show that Moussec was sold in 1969 to Reckitt & Colman, and the Rickmansworth plant was subsequently closed to amalgamate all of R&C’s production. In 1982 the brand was extended to two still wines, made from French and Italian grape concentrates and labelled simply as “Mellow Red” and “Medium Dry White”, with packaging described by the product manager, in an article in Harper’s from 1984, as “modern and informal without being pretentious”. This shows how even by the Eighties there was still a perception that wine was complicated and elitist and producers were struggling to find ways to make the man in the street feel it was for him. In any case this shows that the original sparkling Moussec was still being produced in 1984.

* Seriously, 497? Surely 500 would have been a nice round number? I wonder if the last three were “accidentally” lost. As it happens, under French law the hoard is split between the landowner and the finder, one of the workmen.

** Annoyingly for him, a few years later in 1927 the legal definition was changed to include the Aube.

*** Cutty Sark whisky was allegedly created for the US market in 1923—in the middle of Prohibition. Which is to say that it was created to be bootlegged into the country. However, filmmaker Bailey Pryor, who has made an Emmy-award-winning documentary about the famous rum runner Bill McCoy, the man said to have smuggled Cutty Sark, tells me that this is baloney. A source high up at Berry Bros. & Rudd, who invented the blend, told him that the bootlegging story was made up years after the event. And it’s true that no photos seem to exist of McCoy with any Cutty Sark, although there are photos clearly showing crates of Gordon’s Gin, for example. Moreover, McCoy’s bootlegging career actually ended when he was captured in November 1923. Although imprisoned for only nine months, he did not return to rum-running again.

Posted by Clayton Hartley at 03:26