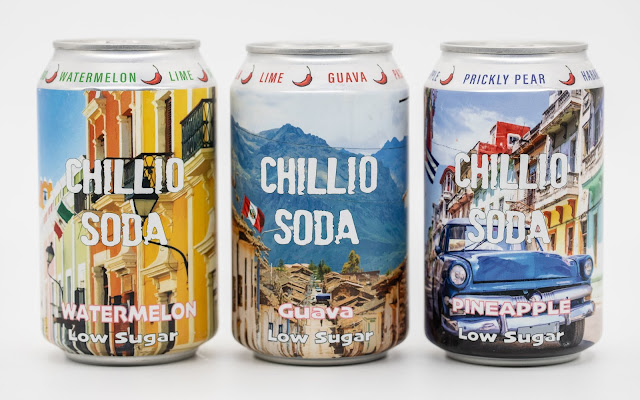 I’m not much one for soft drinks. If I want something tasty I drink booze, and if I’m thirsty I drink water. I’m perplexed by products that seem to be offering a thirst-slaker of water contaminated by small amounts of fruit juice or other flavourings—London tap water is pretty good, so there is no reason not to quaff it.

I was thus intrigued to be sent these new soft drinks, Chillio Soda, in pineapple, guava and watermelon and flavours. They are very specifically not intended as mixers, but rather as an alternative to alcoholic drinks—so you could, in all fairness, ask what place they have in this blog. But it’s an interesting pitch, a non-alcoholic fizzy drink aimed squarely at the adult palate. (And thus, I suppose, the opposite of an alcopop—an alcoholic drink aimed, let’s face it, at the childish palate.) The range is low-calorie, vegan and gluten free, with no refined sugar and no artificial flavouring. Described as a “dry, sessionable drink”, it’s clearly intended as something you can use to match your beer-swilling buddies pint for pint (well, drink for drink) while keeping your body a temple.

The name Chillio comes from the fact that—as if more evidence were needed that this is a grown-up’s drink—these sodas have chilli in them. In fact the whole range is inspired by South and Central America, the flavours apparently based on local street drinks in the region. In addition to the key fruit flavour and the chilli, each drink has lime juice as part of its flavour balance. (In fact if you look at the ingredients list they all have apple juice too, and there are other things like carrot and blueberry: I don’t know if these crop up in the South and Central American street drinks that inspired the range or if the manufacturers just found they needed them in the mix to achieve the desired flavour in a canned beverage.)

First up is a drink inspired by Cuba. Open the can and the aroma is strongly of fresh pineapple. This carries on to the palate—it tastes pretty much of what they say it is, pineapple juice watered down, with a clear lime element followed by a mild chilli heat. This drink specifically has habanero chilli, and there is also prickly pear in there. I don’t know what that actually tastes of, but the elements here combine to make it more savoury and vegetal than you would expect of pineapple, so perhaps that’s the prickly pear’s influence. It is not particularly sweet.

Next is the Peruvian-inspired offering. Open it up and you again get an appealing waft of fresh fruit, this time of guava—not that I think I knew what guava smelled like before, but I’m willing to believe it smells like this. Poured out, it has the colour of rosé wine. Again on the palate there is a thinness which disappoints slightly: the nose suggests it will have a fuller flavour and richer texture than what you get. As with the Cuban, the lime is clearly but discreetly there, but the chilli (specifically pasilla chilli) this time is so subtle that I probably wouldn’t have noticed it if I hadn’t been looking for it.

The third version is inspired by Mexico, based on watermelon. The nose is certainly watermelon-inspired, but this time it’s a bit more synthetic, rather than the convincing fresh-fruit aromas of the other two. On the palate you pick up the same gentle lime presence, but the chilli (jalapeño) is more prominent here than in the other two, though nothing crazy. The liquid is a weird bubblegum pink, which seems somehow appropriate for the slightly sickly impression it leaves me with.

As mentioned, these drinks are intended as alternatives to alcohol. Did I try them as mixers with alcohol anyway? Of course I did. I tried the Cuban blend with rum and it frankly did not work. White rum would probably have been best but all I could find in the cupboard was Havana Club 7-year-old, and frankly for me this quarrelled with the pineapple character of the soda. As an afterthought—and thinking of the Miami Beach cocktail*—I tried it with gin and it actually works much better. But when you can just make the cocktail instead, I don’t see this mixer combination catching on.

I tried the Peruvian guava drink with pisco and it’s OK. The pisco has a light presence unless you dial up the concentration—at which point it’s not really that pleasant. Instead I make myself a pisco sour, which turns out to be much nicer.

And of course I experimented with mixing the Mexican blend with tequila. Again, it’s not revolting, but this mixer is my least favourite, so it’s hard not to feel it is a waste of tequila.

I guess I feel with all of these that the, generally rather inviting, aroma is then let down by the palate, which is more watery than I was expecting. I suspect this lack of body may be what makes it an awkward mixer, but of course that is not what it is intended for. They do call it “sessionable”, which can only mean you can drink a lot of it without ill consequences: perhaps they were being careful to make sure it does not become cloying or sweet after your fifth pint. When you think about it, the relative dryness, with tartness from the lime and sharpness from the chilli, is perhaps intended to replicate the mouthfeel of lager or IPA.

If you’re looking for a session drink free from alcohol, preservatives and artificial anything, and low in calories, then give Chillio a try if you come across it. My tip would be to veer towards the pineapple or guava versions, but don’t expect an explosion of fruit flavours dancing on your tongue.

* In fact there seem to be many cocktails with this name, all completely unlike each other, but the version I first encountered is in the 1935 Bar Floridita Cocktails, reproduced in 2008 by Ross Bolton. The book gave it as equal parts gin and pineapple juice with a teaspoon of sugar, while Difford doubles the proportion of gin. Later versions added vermouth or curacao but I found it works very well by replacing the sugar with Galliano, the vanilla-flavoured liqueur: 2 shots gin, 2½ shots pineapple juice, ½ shot Galliano.

Posted by Clayton Hartley at 03:31