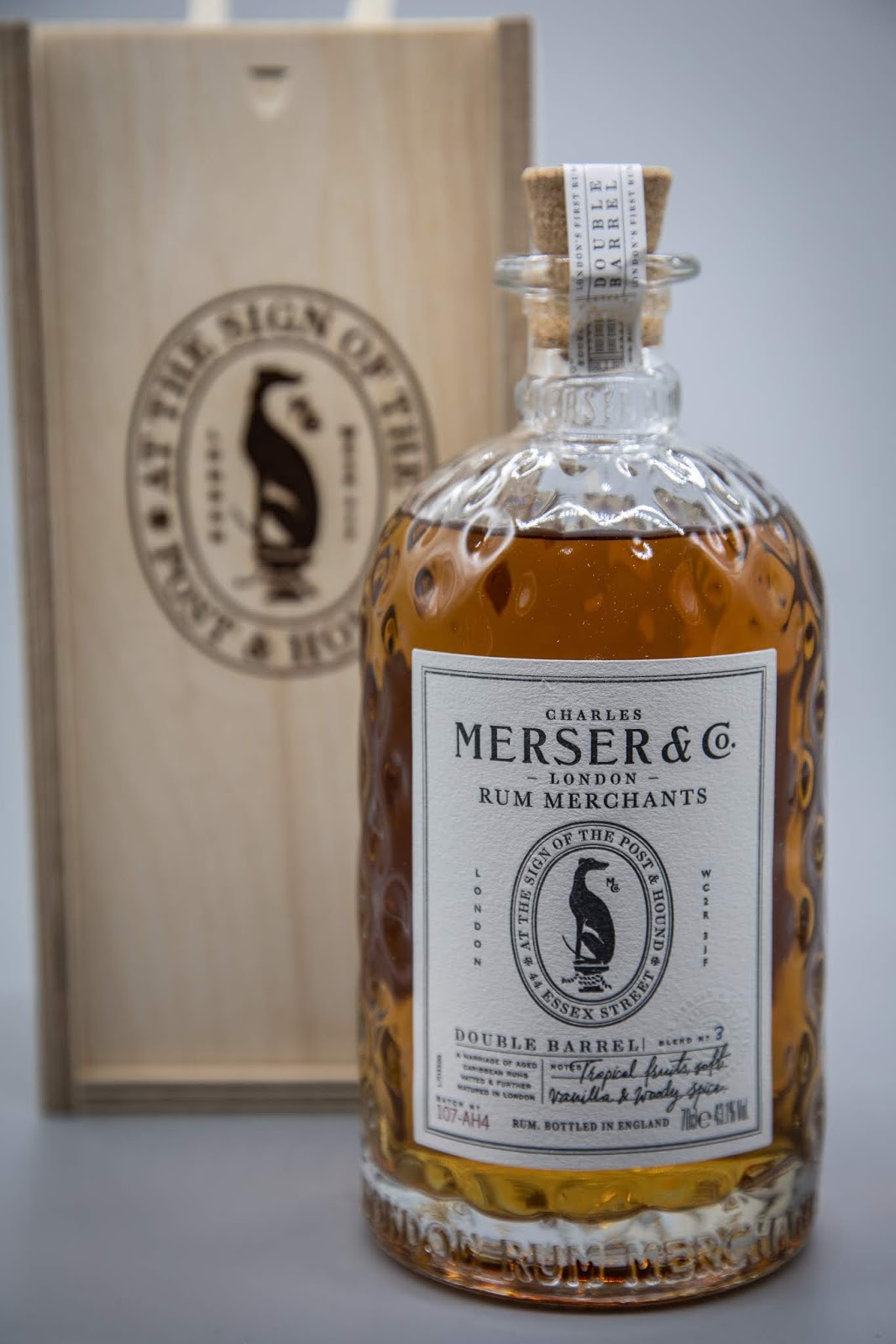 To Temple, by the river, for the launch of a new rum. It’s the brainchild of Hayman’s, whom you probably know as a gin distiller. Hayman’s present themselves as a family firm (I chatted to both Miranda and James Hayman, fifth generation in the business), though in fact Hayman’s gin only dates back to the 1980s. Miranda’s and James’s father Christopher, head honcho, is the son of Marjorie Burrough, of the Burroughs family behind Beefeater Gin, a family gin brand that dates back to 1863.

This sense of history is actually what lies behind the new product. Apparently back in the day the Thames was lined with rum blending houses, importing source rums from around the Caribbean and practising the art of skilful blending to create a perfect balanced product. Industrialisation and cost-cutting later drove this trade elsewhere, and Hayman’s are hoping to bring the old skills back to life. 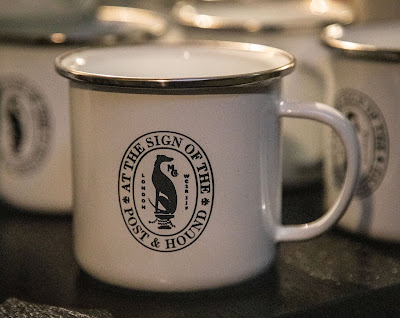 The whole brand, called Charles Merser & Co., is steeped in this olde worlde image. The launch took place in a four-storey Georgian merchant’s house a couple of streets off the Strand, which they have named At the Sign of the Post and Hound. Charles Merser is actually a family ancestor, James tells me, but they are not reviving an old rum-blending business—they simply picked his name, not least because it has a City-of-London mercantile sort of ring to it. The Post and Hound name is a reference to the fact that in the old days pubs were identified by the imagery on their signs, rather than a written name, because most of their clientele couldn’t read. (The post refers to the wooden posts that Thames barges full of rum barrels would tie up at; the dog is a greyhound, apparently a London connection.) I asked if this meant their plan was to turn the building into a rum bar, which seems the obvious way to go, but apparently that sort of decision is a long way off. For now the high narrow building just seems to be a visitor’s centre. 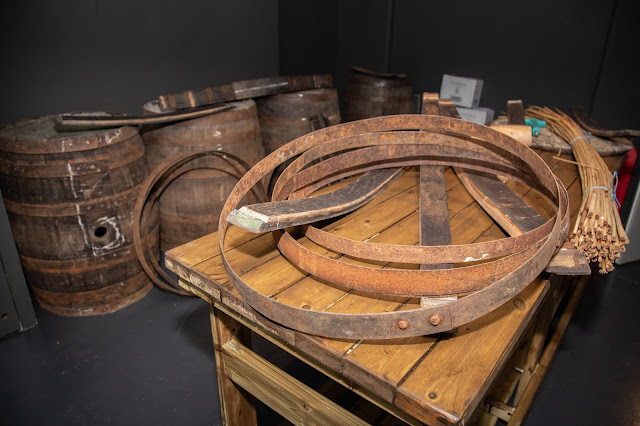 At the launch the ground floor had shelves of bottles, plus some branded enamelled mugs, in one of which I was served a simple hot rum punch, essentially rum, hot water, sugar and spices (cloves and, I think, star anise). I think this room is intended as a shop front. Up on the first floor was a tasting room where we sampled the rum and on the top floor was a bar where vintage cocktails were being dispensed. Down in the cellar was their blending room. The idea is that the blending really will take place here, although it is no longer permissible to store barrels of rum in a London town house, for fire safety reasons, so all the storage will go on at the Hayman’s distillery plant in Balham. At the time of my visit there were only some empty barrels plus some pieces of barrel to show how they are made.

It was in this room that I learned a bit about how the new rum was concocted. It is made from three existing blends, in turn composed of some ten source spirits. The three component blends are imported, blended here then left in barrels for a number of months. Whereas the aged rums in the blend have matured in tropical conditions, which accelerates the interaction with the wood, the final ageing takes place in the temperate British climate, using barrels already used first for bourbon and then for whisky, so there is far less flavour imparted from this process. It is more about allowing the blend of blends to settle and marry. Given that so many different rums go into the mix, I asked if it was expected that as time went by different source spirits would be used, with the blending process used to adjust the recipe to ensure a consistent final flavour was maintained, and this does indeed seem to be the plan. Up in the top-floor bar there were rows of the source rums on display (not for tasting!), ranging in colour from completely colourless to dark brown. 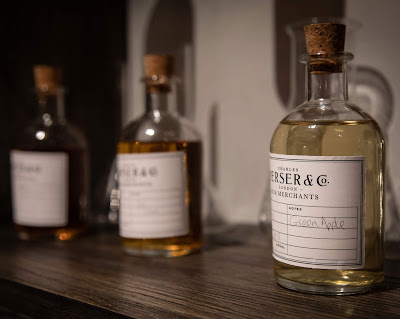 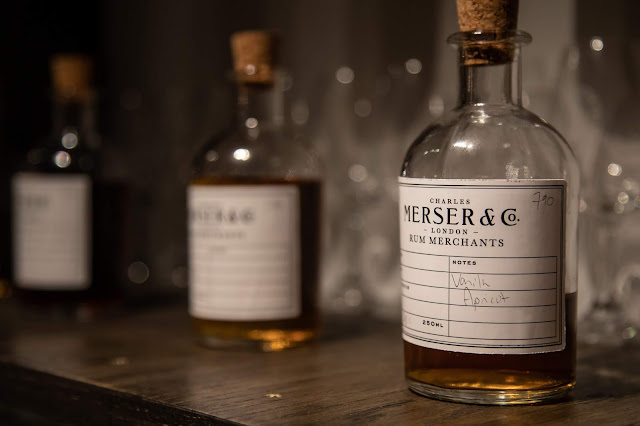 On the nose there are hints of the pungent Jamaican pot-still character (which pokes you in the eye when you open a bottle or Wray & Nephew), but these are well controlled within a soft and smooth aroma, with distinct notes of pineapple and mango, a bit of banana, plus caramel and for me a sweet sherry aroma. On the palate it is smooth and subtle, fruity and chocolatey. It is very easy to drink neat, elegant and refined. It’s more like an old-school butler than a hipster flairtender. It doesn’t scream one particular flavour, but dignifiedly suggests one nuance after another with a discreet cough. Add a little water and the chocolate and pineapple seem to come out more on the nose, and for the first time I notice the wood, while the palate takes on a creamy quality.

At £38 a bottle the Double Barrel is not cheap, but at the same time it seems good value to me. My immediate impression is that this is not a rum you would smother with mixer, but Hayman’s are keen to showcase some cocktails with it. The Hot Spiced Rum that I was served when I arrived was a bit sweet for me—I found myself wanting to add a squeeze of lemon juice. Up in the top floor bar I got to try a Polo, two parts rum, one part orange juice and one part lemon juice. It’s nice enough and you are aware of the rum, but having recently sampled it neat I now find myself wishing I could taste more of it in the mix.

I’m keen to try the Palmetto, combining rum with red vermouth and a dash of orange bitters. It’s nice, but again I instinctively feel there should be a bit more of an emphasis on the rum. The next day, at home, I make my own. I can see that the recipe in the booklet handed out at the launch gives equal parts rum and vermouth: by analogy with a Manhattan or a Rob Roy, this is a bit vermouth-heavy, so I try one that uses two parts rum to one part Antica Formula red vermouth, plus a couple of dashes of Angostura bitters. It’s bloody fantastic, with lots of toasty caramel flavour hitting you up front and a Christmasy cinnamon flavour (I think the Angostura is partly responsible for this). 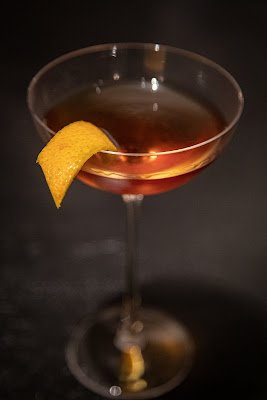 Another cocktail that catches my eye in the booklet is the Flapper, made with rum and dry white vermouth, plus a dash of Angostura. The stated proportions are 1:1 again, and again I am cautious about overwhelming the rum, but in fact in this mix the rum holds its own easily. In fact at equal parts the vermouth is hard to pin down, yet clearly affects the overall flavour: I’m using Belsazar Dry and it seems to add a saline finish, creating a pronounced note of salted caramel. It’s a good, subtle, complex drink. I also try making a Small Dinger, a recipe I found in Bar Florida Cocktails (1935) which no one else seems to have heard of or make, but despite the unlikely wheeze of combining rum and gin, I think it really works. Again it performs well with Double Barrel, with the rum showing its character and cozying up comfortably with the gin in the way that it mysterious does in this cocktail.

As you can tell, I’m much taken by Merser Double Barrel. It’s complex but approachable, easy to drink on its own and working well in certain classic style cocktails where it retains its character. In longer drinks I think it gets a bit lost, but there are plenty of short drinks to experiment with, until you suddenly find you’ve reached the end of the bottle…

*I take a fairly dim view of garnishes in general—sometimes their big fresh flavours can ride roughshod over subtleties of the cocktail ingredients; with some Martinis I regularly put a bit of lemon peel in then instantly regret it, as the vigorous rind oils steamroller the gin’s aromas. And when gin brands recommend you garnish their G&T with a kumquat, I find myself thinking, “So why didn’t you just put more kumquat in the botanical mix?” (Though I concede that some things taste quite different fresh from the way they do when infused then redistilled.) But in this case the lemon rind really complements the cocktail. 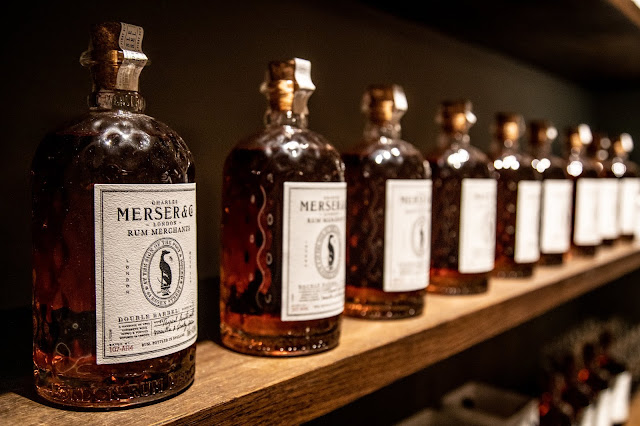 Posted by Clayton Hartley at 08:17